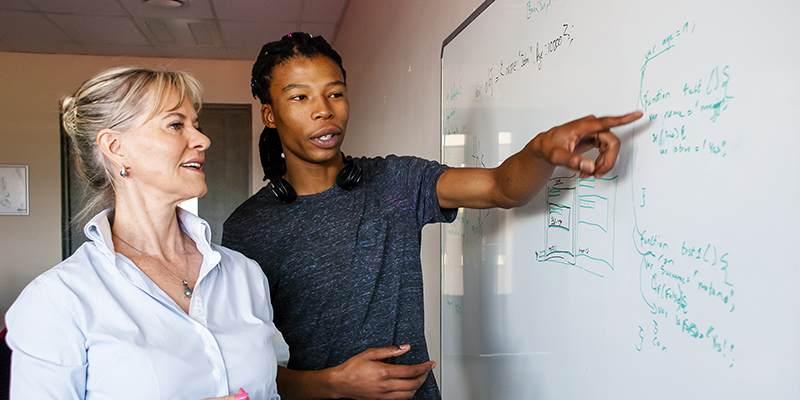 This April marks a quarter century since the formal end of apartheid in South Africa, when Nelson Mandela was elected as the country’s first black president. Since then, the country has become the second-largest economy on the continent and home to a dynamic, growing tech scene.

But that success has not been evenly distributed. By any measure, according to a World Bank report last year, South Africa is one of the most unequal countries in the world.

“The only hope that this country has is deep, inclusive growth,” says Jenny Retief, CEO of Riversands Incubation Hub, a startup initiative helping the country’s diverse entrepreneurs thrive. “You only get economic resilience and multi-faceted growth by having a lot of businesses across a lot of industries.”

A non-profit based in Johannesburg, Riversands provides infrastructure support to South African startups of all shapes and sizes. Launched in 2015 through a public-private partnership, Riversands gives founders everything from physical space—like secure offices and mini-factories—to marketing, sales, HR, and legal services. The hub also offers more intangible services, like professional development and mentoring, and partners widely to bring  coding and technical skills programs to founders and aspiring entrepreneurs.

While the legend of the “garage entrepreneur” can be inspiring, every successful founder stands on the shoulders of a support network. Cities and countries trying to develop a startup scene can’t simply throw money at would-be entrepreneurs and wait for the growth to come.

“Our experience is that there really isn’t a shortage of funding, per se,” says Retief. “Entrepreneurs get frustrated when they hear you say that, but we talk to as many frustrated, want-to-invest investors as we do frustrated entrepreneurs.” Closing that gap, says Retief, means helping companies do the things that investors need to see: creating a value proposition, developing sales and delivery systems, and articulating how an investment will translate to growth.

Unlike many incubators, Riversands doesn’t employ a cohort-based progression through a structured program. The selection process is ongoing, with companies qualifying for different services based on their growth and success. Admission isn’t based on the sector of an applicant, nor its size; the current roster of entrepreneurs ranges from a tiny bag-making business to a waste-to-power company that employs over 100 people.

Riversands does look for some common criteria in all successful applicants: a viable business model, growth potential, and at least 51% black ownership. “South Africa has a lot of talented black entrepreneurs,” says Retief. “But largely because of our history, previous denial of access to resources means there’s quite high barriers to entry.”

Many of Riversands’ founders are turning around and directly supporting their communities. Andile Fulane, CEO of Seed of Prosperity, developed a money management app that helps people with poor credit get out of debt and save toward their financial goals. Another startup, Robolite, is devising a theft-proof, simple traffic light system that takes over during power failures—a boon for Johannesburg drivers frustrated with congestion.

For Riversands, on-the-ground outcomes, rather than valuation, is the metric for success. “We care about job and earning opportunities,” says Retief. “We track the turnover growth of the whole ecosystem, which grows in two ways: it grows because individual companies grow, and it grows because more and more businesses start and come into the ecosystem.”

Three years in, 170 businesses—including 76 women-owned companies—call Riversands home, with over 2,750 jobs created in that time. In a country with more tech hubs than anywhere else in Africa, that’s an impressive record of measurable success.

“One of the learnings we got from talking to other incubators before we started is that too often, businesses survived in the incubator and died very soon thereafter,” says Retief. Helping founders succeed, she says, means preparing them for the long haul: “We try to be a microcosm of the real world, from day one.”