How Glia Combines Technology with a Human Touch

Prior to co-founding Glia in 2012, Justin DiPietro and Dan Michaeli were working with Accenture as growth and operational consultants for a fortune 500 electronics retailer and Carlos Paniagua was working towards his PhD in real-time embedded systems from the University of Tartu. While their original project was to figure out how this retailer could compete against rising e-commerce rivals through incremental price optimization, they quickly realized that the company’s greatest strength was not its prices, but rather its employees, who were widely-known for their “blue shirts” and exceptional in-person customer service. Realizing they needed to compete with the convenience of online rivals, DiPietro explains, the business needed to find a way to “bring the in-person customer experience online.”

This realization sparked a vision, and Glia was born. Glia is a digital-first communications platform that allows its clients to provide superior customer service via messaging, video chat, co-browsing, phone calls, and AI—all consolidated into a single system of engagement. Everyone at some point has experienced the frustration of speaking with an agent at a traditional call center—enduring long wait times and a battery of security questions before finally reaching an agent, only to be transferred to a different agent to whom they have to explain their problem all over again. By allowing interactions to switch seamlessly between various channels, Glia eliminates the need for customers to repeat themselves, thereby reducing average handle times, and improving both the end-to-end customer and agent experiences. 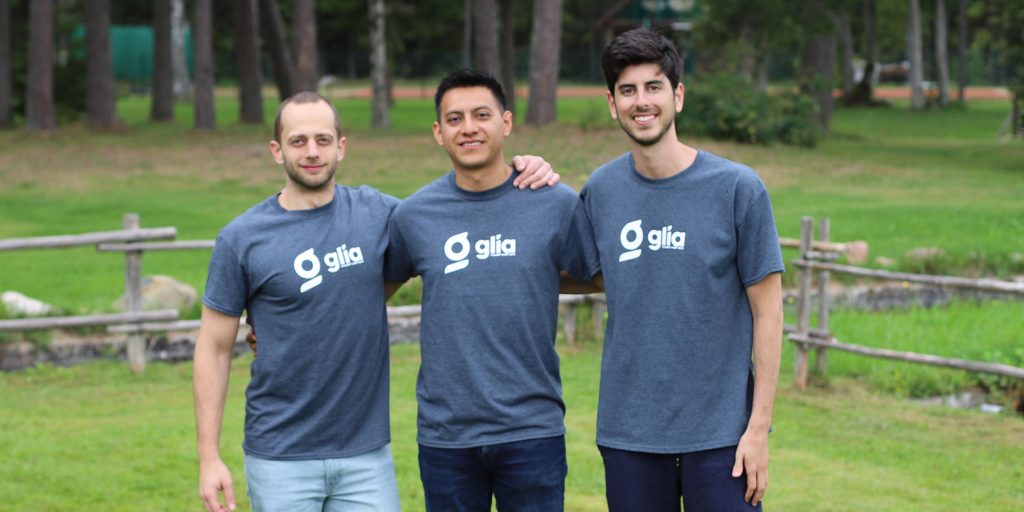 It’s a win-win situation: by saving both parties time, the client saves money. “Rather than spending valuable time on the phone stating your name, address, account number and trying to  remember the answers to your security questions, the customer can immediately relay their point of friction to the agent and the two can work through the issue together in real time. This saves the customer’s time, the agent’s time, and is less costly on many levels,” DiPietro says.

Glia’s clients are mainly in financial services—“everyone from tier-one banks, regional banks, credit unions, and insurance companies,” according to DiPietro—and are located in the United States, Europe, Canada, Chile, Colombia, and Mexico. The company, which has raised about $30 million to date, expects to have around 100 employees by the end of this year. Glia has four offices across the world in New York, London, and two in Estonia, where co-founder Carlos Paniagua received his master’s degree in computer science. DiPietro recalls, “When we started hiring engineers, [Paniagua] told Dan and me, ‘all the great engineers I know are back in Estonia.’ So we started hiring developers and engineers out there, and Carlos eventually moved over there and continued to build his team.”

Having a founder in the Estonia office helps Glia’s efforts to maintain a consistent office culture throughout its different locations. In addition to engineering, the Estonia offices now handle design and are also involved in sales. The time  zone difference is beneficial when it comes to serving Glia’s global clientele, DiPietro points out, since the Estonia office can help resolve issues during the hours that the US offices are closed: “we’re on call for our clients almost 24/7.”

Glia currently uses Amazon’s entire stack of services, and has “always been 100% on AWS,” DiPietro says. Sometime in early 2020, Glia plans to utilize AWS Transcribe quite a bit. “We’re going to do all the real-time transcription and then run through all of our integrations with AWS Lex,” DiPietro explains. “AWS Lex can look for the intents within the transcriptions and then provide agents with real-time responses that they can relay to their customers. The second area that we’re rolling out in the next few months is a compliance framework, so when an agent is chatting with an end customer online, everything the agent says is being run through AWS Lex. Additionally, if the customer says something that’s not compliant, or they say something that’s off or not part of the training, they will receive a real-time notification to correct their statement.”

DiPietro acknowledges that the biggest challenge Glia faces is “it’s very hard to understand what we do without seeing it.” For this reason, he says, they always try to do live demos, or offer free “sandbox environments” to new clients. This means the client can install and see the platform within the staging systems for themselves. “The biggest thing that I always tell prospects about why I love demoing Glia,” DiPietro says, “is because not a lot of companies can go in there and say, ‘Hey, we’re going to cut your costs by reducing your time spent on the phone, all while making your customer experience better.’”