In this blog post, we show you how to set up end-to-end encryption on Amazon Elastic Kubernetes Service (Amazon EKS) with AWS Certificate Manager Private Certificate Authority. For this example of end-to-end encryption, traffic originates from your client and terminates at an Ingress controller server running inside a sample app. By following the instructions in this post, you can set up an NGINX ingress controller on Amazon EKS. As part of the example, we show you how to configure an AWS Network Load Balancer (NLB) with HTTPS using certificates issued via ACM Private CA in front of the ingress controller.

How and where you terminate your TLS connection depends on your use case, security policies, and need to comply with regulatory requirements. This section talks about four different use cases that are regularly used for terminating TLS. The use cases are illustrated in Figure 1 and described in the text that follows. 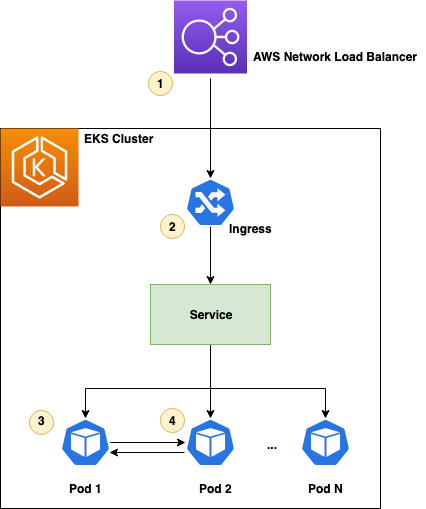 In this blog post, we use a scenario where there is a requirement to terminate TLS at the ingress controller level, demonstrating the second example above.

Figure 2 provides an overall picture of the solution described in this blog post. The components and steps illustrated in Figure 2 are described fully in the sections that follow.

Before you start, you need the following:

Verify that you have the latest versions of these tools installed before you begin.

If you already have a running Amazon EKS cluster, you can skip this step and move on to install NGINX Ingress.

You can use the AWS Management Console or AWS CLI, but this example uses eksctl to provision the cluster. eksctl is a tool that makes it easier to deploy and manage an Amazon EKS cluster.

This example uses the US-EAST-2 Region and the T2 node type. Select the node type and Region that are appropriate for your environment. Cluster provisioning takes approximately 15 minutes.

To provision an Amazon EKS cluster

You should see output similar to the above, with all pods in a running state.

NGINX Ingress is built around the Kubernetes Ingress resource, using a ConfigMap to store the NGINX configuration.

Note: Even though, it’s returning an HTTP 404 error code, in this case curl is still reaching the ingress controller and getting the expected HTTP response back.

Once your load balancer is provisioned, the next step is to point the application’s DNS record to the URL of the NLB.

As you go through the scenario, replace rsa-2048.example.com with your registered domain.

cert-manager is a Kubernetes add-on that you can use to automate the management and issuance of TLS certificates from various issuing sources. It runs within your Kubernetes cluster and will ensure that certificates are valid and attempt to renew certificates at an appropriate time before they expire.

You can use the regular installation on Kubernetes guide to install cert-manager on Amazon EKS.

After you’ve deployed cert-manager, you can verify the installation by following these instructions. If all the above steps have completed without error, you’re good to go!

Note: If you’re planning to use Amazon EKS with Kubernetes pods running on AWS Fargate, please follow the cert-manager Fargate instructions to make sure cert-manager installation works as expected. AWS Fargate is a technology that provides on-demand, right-sized compute capacity for containers.

In this scenario, you create a private certificate authority in ACM Private CA with RSA 2048 selected as the key algorithm. You can create a CA using the AWS console, AWS CLI, or AWS CloudFormation.

To create an ACM Private CA

Download the CA certificate using the following command. Replace the <CA_ARN> and <Region> values with the values from the CA you created earlier and save it to a file named cacert.pem:

Once your private CA is active, you can proceed to the next step. You private CA will look similar to the CA in Figure 3. 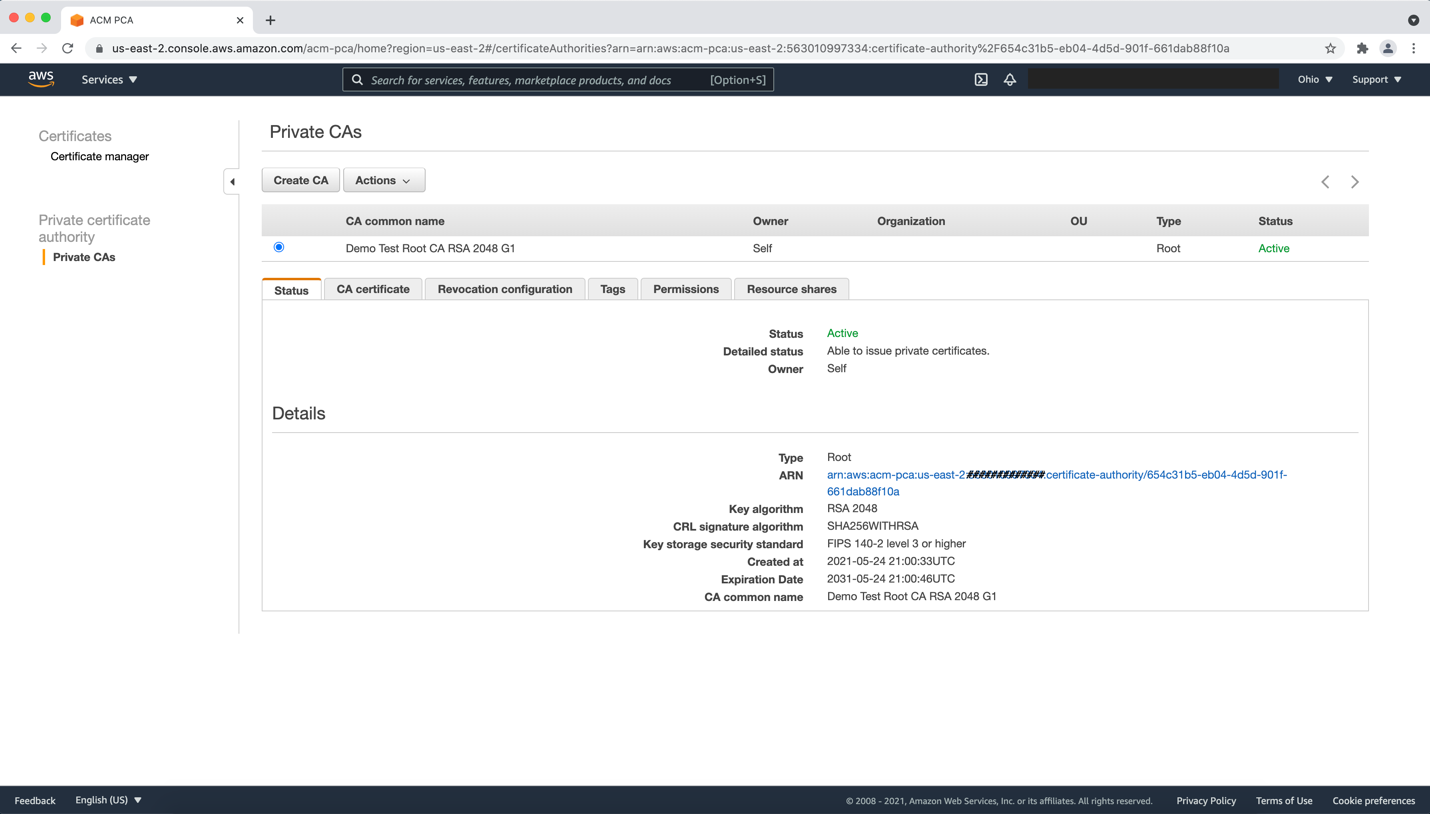 In order to issue a certificate from ACM Private CA, add the IAM policy from the prerequisites to your EKS NodeInstanceRole. Replace the <CA_ARN> value with the value from the CA you created earlier:

Create an Issuer in Amazon EKS

Now that the ACM Private CA is active, you can begin requesting private certificates which can be used by Kubernetes applications. Use aws-privateca-issuer plugin to create the ClusterIssuer, which will be used with the ACM PCA to issue certificates.

Issuers (and ClusterIssuers) represent a certificate authority from which signed x509 certificates can be obtained, such as ACM Private CA. You need at least one Issuer or ClusterIssuer before you can start requesting certificates in your cluster. There are two custom resources that can be used to create an Issuer inside Kubernetes using the aws-privateca-issuer add-on:

To create an Issuer in Amazon EKS

Now, you can begin requesting certificates which can be used by Kubernetes applications from the provisioned issuer. For more details on how to specify and request Certificate resources, please check Certificate Resources guide.

To request the certificate

For the purpose of this scenario, you can create a new service—a simple “hello world” website that uses echoheaders that respond with the HTTP request headers along with some cluster details.

To deploy a demo application

Expose and secure your application

Now that you’ve issued a certificate, you can expose your application using a Kubernetes Ingress resource.

To expose and secure your application

After completing the previous step, you can to access this service from any computer connected to the internet.

To avoid incurring future charges on your AWS account, perform the following steps to remove the scenario.

You can delete the ACM Private CA by following the instructions in Deleting your private CA.

As an alternative, you can use the following commands to delete the ACM Private CA, replacing the <CA_ARN> and <Region> with your own:

Once the ACM Private CA has been deleted, continue the cleanup by running the following commands.

In this blog post, we showed you how to set up a Kubernetes Ingress controller with a service running in Amazon EKS cluster using AWS Load Balancer Controller with Network Load Balancer and set up HTTPS using private certificates issued by ACM Private CA. If you have questions or want to contribute, join the aws-privateca-issuer add-on project on GitHub.

In this blog entry, we will take a look at two examples of supply chain attacks that our Managed Detection and Response (MDR) team encountered in the past couple of months.

As many countries reintroduced lockdowns and restrictions, more people are once again stuck at home. Not only are people possibly bored at home, but many major sporting events are taking place. This brings fans to Read more…