How to implement the principle of least privilege with CloudFormation StackSets

If a user has permission to create a stack or stack set using a template of their creation, what stops them from using CloudFormation to create an AWS Identity and Access Management (IAM) identity that has elevated permissions that they can then use? Or, what stops the user from creating resources of a certain size or within AWS services that they’re not otherwise permitted to use?

Instead of denying these actions, let’s look at how you can limit the scope of what can be created via CloudFormation by enforcing the application of permissions boundaries. Permissions boundaries are an IAM feature that set the maximum permissions that an identity-based policy can grant to an IAM identity. For example, consider this managed policy—called MyLambdaBoundaryPolicy—which allows the s3:GetObject action on any resource:

And consider this policy—called AdminPolicy—which allows all actions on all resources:

If you apply AdminPolicy as an identity-based policy on an IAM role and the MyLambdaBoundaryPolicy policy as the permissions boundary policy for the role, the effective permissions that the role has are the intersection of the two policies. In this example, the permission is limited to s3:GetObject. 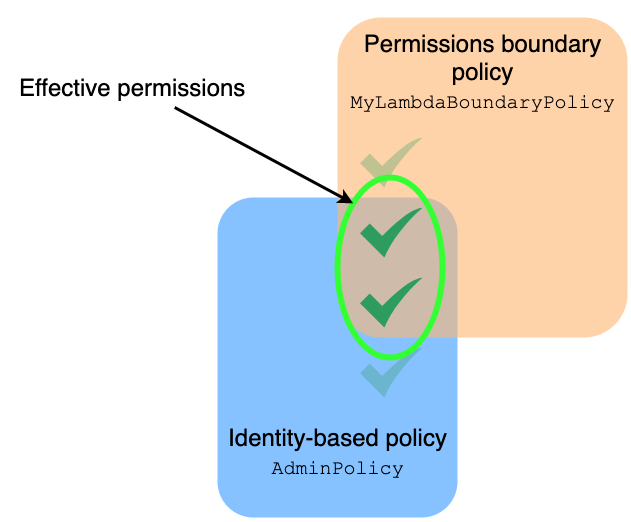 Figure 1: The intersection of identity and permissions boundary policies

Roles and policies used by CloudFormation

CloudFormation can initiate stack and stack set deployments by assuming an IAM role that the user passes to the service. You must ensure that this role has the necessary permissions to create, update, and delete the resources that are part of the stack or stack set. The role should also adhere to the principal of least privilege by not having more permissions than are needed to deploy the stack or stack set.

This post focuses on the stack set use case as it is slightly more involved due to its use of two roles compared to the use of a single role for a stack. The two roles a stack set uses are:

Figure 2 shows the relationship between these roles. 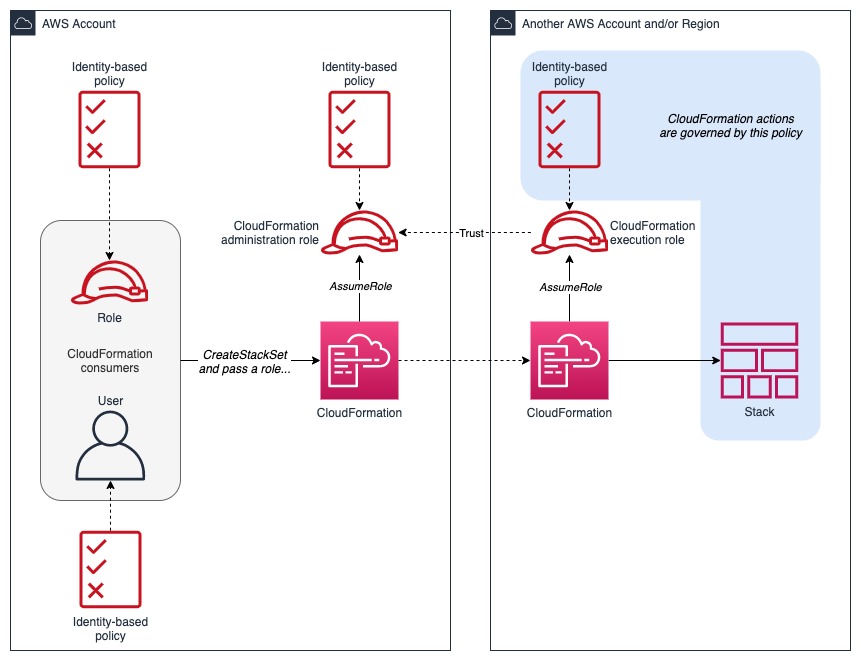 The permissions policy on the administration role must allow the role to assume the execution role in any AWS accounts that are in scope for the stack set:

The permissions policy for the execution role is more complex as it must account for every action that CloudFormation must call as it creates, updates, and deletes resources. The next section covers how to build that policy.

In keeping with the practice of granting least privilege, the permissions policy for the CloudFormation execution role should be as detailed as possible while avoiding overly generous permissions. For example, instead of allowing lambda:*—which allows all AWS Lambda actions—use specific actions such as lambda:CreateFunction and lambda:DeleteFunction.

The question now becomes, what are the specific actions that CloudFormation needs permissions for?

This is best gleaned by exploring the actions that CloudFormation calls when launching, updating, and deleting the stack in a non-production or development environment. In a non-production setting, the user can launch their template as a CloudFormation stack using their own, privileged permissions without affecting the production environment. A list of the resulting actions taken can be generated by examining the event history captured by AWS CloudTrail. The user can use Amazon Athena to query CloudTrail logs and build a concise list of actions.

Note: Be sure to query the CloudTrail logs only after launching and deleting the stack in order to capture actions from both operations. Refer to the AWS CloudTrail documentation for information about how to enable and use CloudTrail.

To define the required permissions

As the user who is launching a template in a non-production setting, follow these steps:

Note: If you are following these steps in a Region other than us-east-1, be aware that some services, such as IAM, create CloudTrail logs in the us-east-1 Region regardless of which Region the event actually occurred in. Ensure that you create a partition in your data catalog for us-east-1 and that if you’re querying by Region, you include us-east-1 in the query.

The format of the userIdentity.arn value will depend on how you’ve authenticated to AWS. If you logged in as an IAM user, <USER-IDENTIFIER> is your IAM user name. If you’ve logged in via federation, it will be your federated ID such as [email protected]. You can explore the fields and possible values found in the userIdentity element in the CloudTrail documentation. This query can also be further refined to include only results from certain AWS Regions or within a specific time window. Refer to this section of the CloudTrail documentation for information on the fields contained in log records.

The results of the Athena query will resemble those shown in Figure 3. 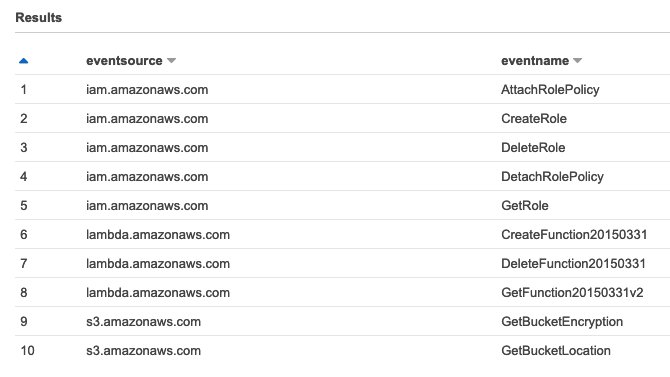 The eventsource column shows the AWS service principal that is reporting that an event occurred and the eventname column shows the name of the event. You can use these two pieces of data to form an action that can be used in an IAM policy.

Create the IAM policy document for the CloudFormation execution role

Now that the actions are assembled, you can combine them with your knowledge of the resources that your CloudFormation template describes to build an IAM policy document.

This policy gives the user just enough permissions to:

When you put the CloudFormation templates, IAM roles, permissions boundary policy, and least privilege policies together in the right sequence, here’s what it looks like.

The following is an example resources template that matches the example permissions template shown in step 2:

To deploy this template, the user will follow these steps:

The Lambda resources are created in the AWS accounts that are specified in the stack set. The role that the Lambda function runs under has enough permissions for the function to do its work, but no more. Even if the resources template assigns a more permissive permissions policy to the role, the permissions boundary policy ensures that the effective permissions are scoped to only what is required.

By applying guardrails to user permissions, you can empower users to build solutions while at the same time following the principle of least privilege and other organizational policies. As shown in this post, this is achieved through a combination of:

To learn more about the principle of least privilege in AWS, watch Separation of duties, least privilege, delegation, and CI/CD (SDD329), which was presented at AWS re:Inforce 2019.

Welcome to your complete guide to AWS re:Invent 2021, where you will find tips on how to get the most out of your conference experience both in Las Vegas and virtually.