Prometheus is an open source monitoring solution that has emerged as a very popular tool for collecting metrics from microservices running in a variety of environments including Kubernetes. In tandem with Grafana, a widely deployed data visualization tool, Prometheus enables customers to query and visualize operational metrics collected from their workloads. Customers deploying their Prometheus server in their container environments face challenges in managing a highly available, scalable, and secure Prometheus server environment and infrastructure for long-term storage.

The recent release of Amazon Managed Service for Prometheus (AMP) addresses these problems by providing a fully managed, highly available, secure, and scalable service that customers can use to monitor the performance of containerized workloads on AWS or on-premises, without having to manage the underlying infrastructure.

Although Prometheus supports dynamic discovery of resources, such as nodes, services, and pods in a Kubernetes cluster, it is not tailor-made for deployment to an Amazon Elastic Container Service (Amazon ECS) cluster. In this blog post, we present a solution that will enable customers to deploy Prometheus server on an Amazon ECS cluster, dynamically discover the set of services to collect metrics from, and send the metrics to AMP for subsequent query and visualization as well as long-term storage. This solution will also enable Amazon ECS customers to leverage libraries and servers that help in exporting existing metrics from third-party systems as Prometheus metrics.

At a high level, we will be following the steps outlined below for this solution:

The source code for the solution outlined in this blog as well as artifacts needed for deploying the resources to an Amazon ECS cluster can an be downloaded from the GitHub repository.

To use Prometheus as a viable monitoring tool in large-scale deployments on Amazon ECS, having a dynamic service discovery mechanism is imperative. Customers using Amazon ECS can make use of AWS Cloud Map for service discovery needs. AWS Cloud Map is a fully managed service that you can use to register any cloud resources, such as Amazon RDS database instances and Amazon EC2 instances with logical names. Subsequently, client applications that depend on these resources may discover them using DNS queries or API calls, referencing the resources by their logical names. AWS Cloud Map is tightly integrated with Amazon ECS. As new services and tasks spin up or down, they automatically register with AWS Cloud Map. 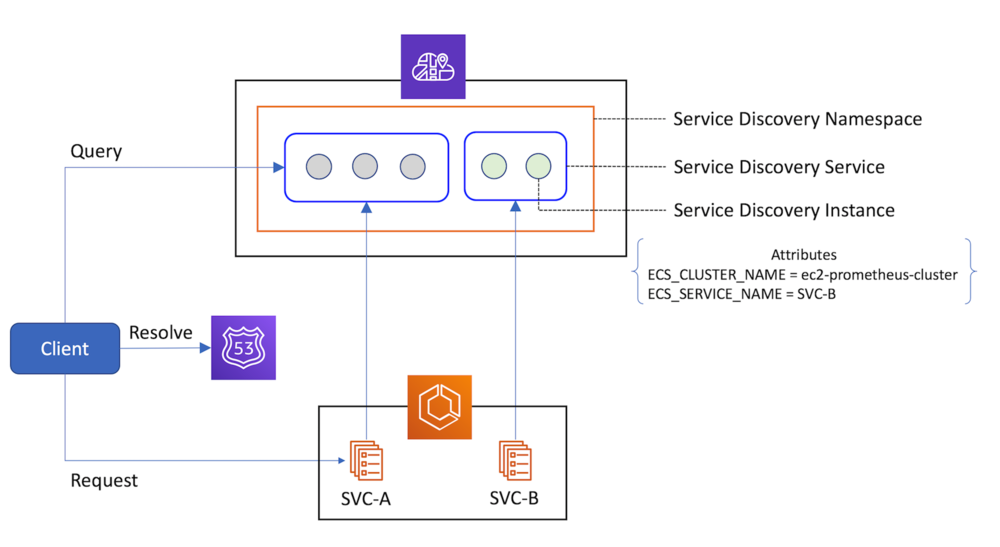 A service discovery namespace is created as follows and associated with an Amazon Virtual Private Cloud (Amazon VPC).

Next, a service discovery service, which encapsulates a service registry, is created within this namespace. Typically, there should be a separate service registry in Cloud Map corresponding to each ECS service that we want to collect metrics from. Note that we are using service tags to specify the URL path and port for the endpoint where the service exposes its metrics.

One or more service discovery instances exist within this service registry and represent the resources that clients within the Amazon VPC can discover using a private DNS name constructed with the format {service-discovery-service}.{service-discovery-namespace}.

Service discovery registration can be performed only at the time of creating an Amazon ECS service, using the Amazon Resource Name (ARN) of a Cloud Map service registry. Each task is registered as a service discovery instance, which is associated with a set of attributes, such as ECS_CLUSTER_NAME, ECS_SERVICE_NAME, and ECS_TASK_DEFINITION_FAMILY.

When an Amazon ECS service is launched using AWS Command Line Interface (AWS CLI), the –service-registries argument is used, as shown below, to enable the service to register itself with a service registry in AWS CloudMap.

The application that performs custom service discovery is configured to read a list of Cloud Map namespaces from AWS Systems Manager Parameter Store. It periodically collects metadata about the ECS tasks registered under each service registry within these namespaces and assembles a JSON configuration file ecs-service.json, which provides a list of scraping targets.

This configuration is used for adding metadata, such as the ECS cluster, service, and task definition names, as labels to the Prometheus metrics scraped from each target, in addition to the ones added by a service using Prometheus client library. This file is plugged into Prometheus’ file-based service discovery mechanism by saving it to the same data volume that is bind-mounted into the Prometheus server, which is configured to refresh its scraping targets from this file every 30 seconds. This step ensures that the metrics samples it collects reflect the current state of microservices deployed to the Amazon ECS cluster. A representative example of this configuration file is shown below.

As the service discovery application uses both AWS Systems Manager and AWS Cloud Map APIs to perform its task, the IAM policy attached to the ECS task role should contain the following additional set of permissions.

The following figure shows a deployment to an Amazon ECS cluster on EC2 that we will use to demonstrate the metrics collection approach outlined above. This deployment has the components: 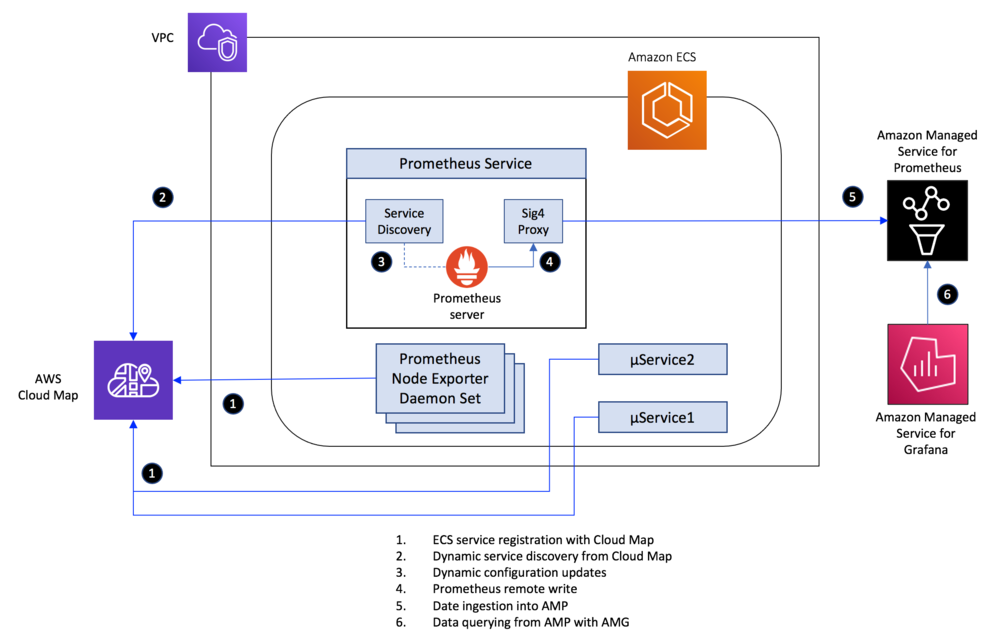 The set of services launched is shown below in a view of the ECS Console. The services that are to be scraped for Prometheus metrics are WebAppService and NodeExporterService.

The set of service registries where the above ECS services register their respective tasks is shown here in the Cloud Map Console. 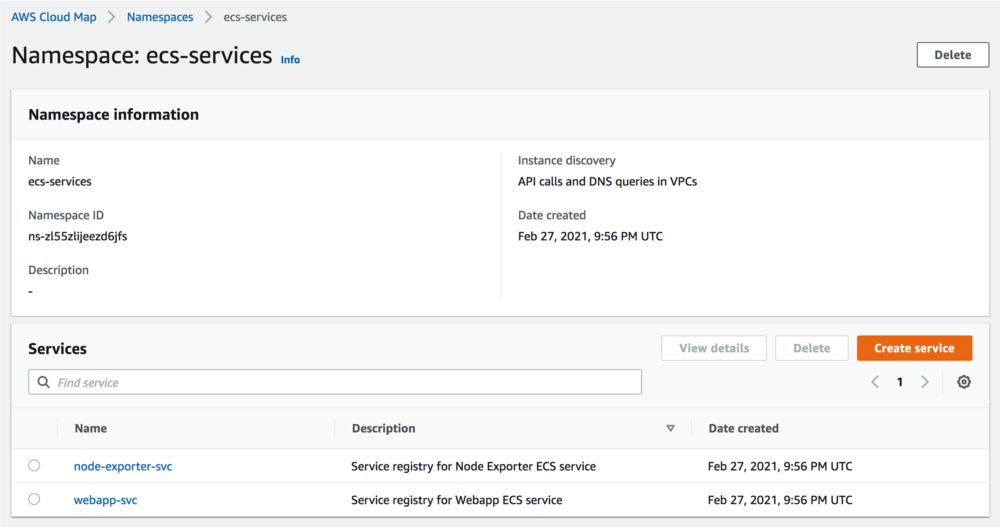 The following figure shows the metadata associated with a service discovery instance in Cloud Map that corresponds to one of the tasks in the NodeExporterService. 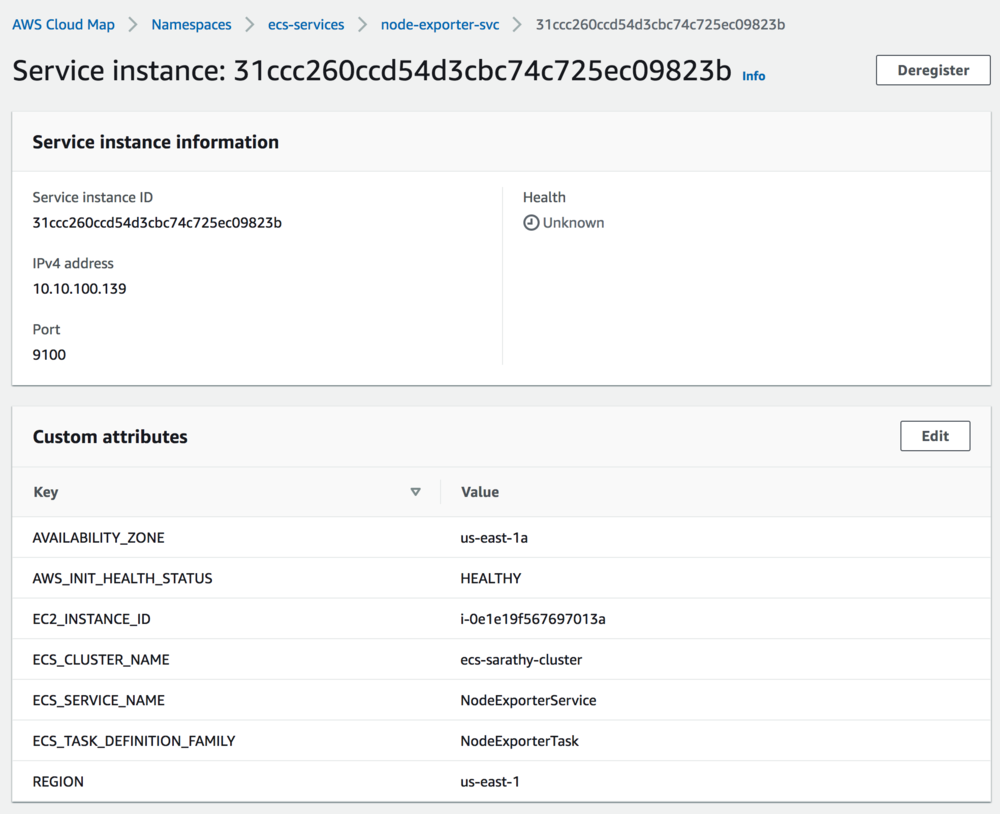 The metrics ingested into AMP are visualized using Amazon Managed Service for Grafana. AMG is a fully managed service that enables you to query, correlate, and visualize operational metrics, logs, and traces from multiple sources. Refer to the documentation on how to add an AMP workspace as a data source to AMG. The figure below shows a visualization of the Counter and Histogram metrics collected from the web application. 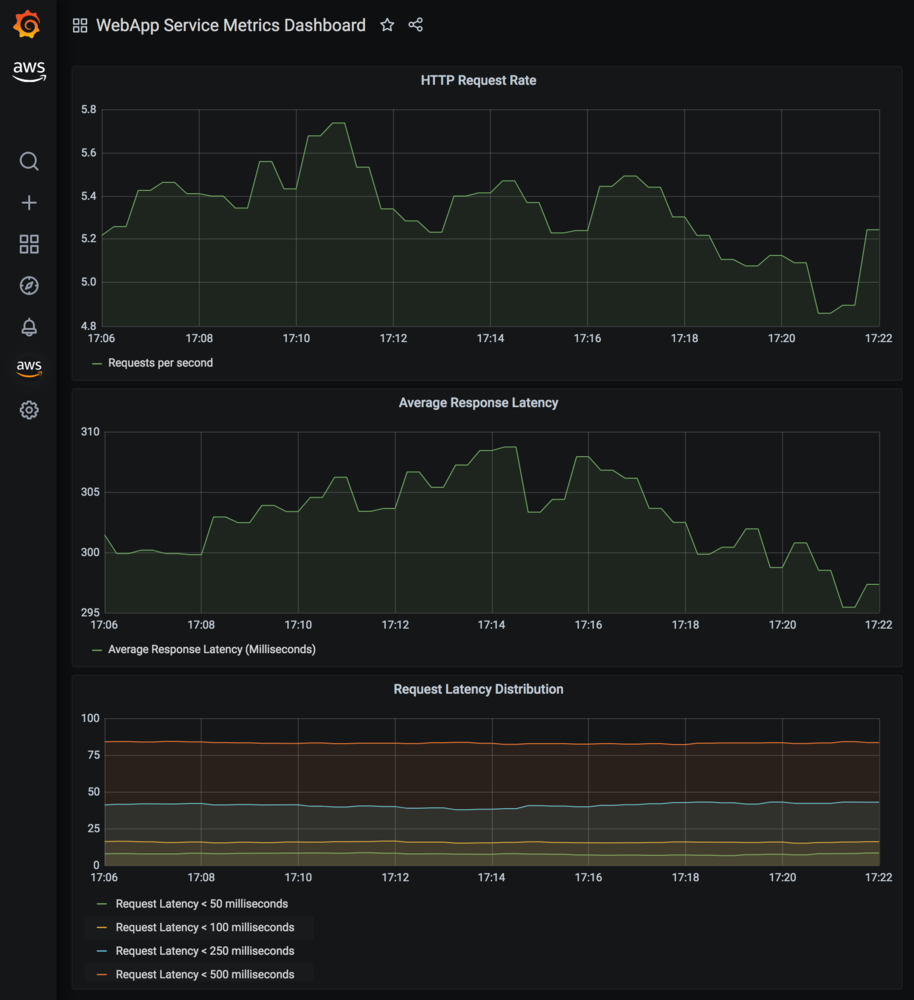 The Node Exporter service exposes a wide variety of EC2 instance-specific system metrics. The figure below shows a visualization of the average network traffic received, per second, and average CPU usage over the last minute, computed using the Counters node_network_receive_bytes_total and node_cpu_seconds_total. 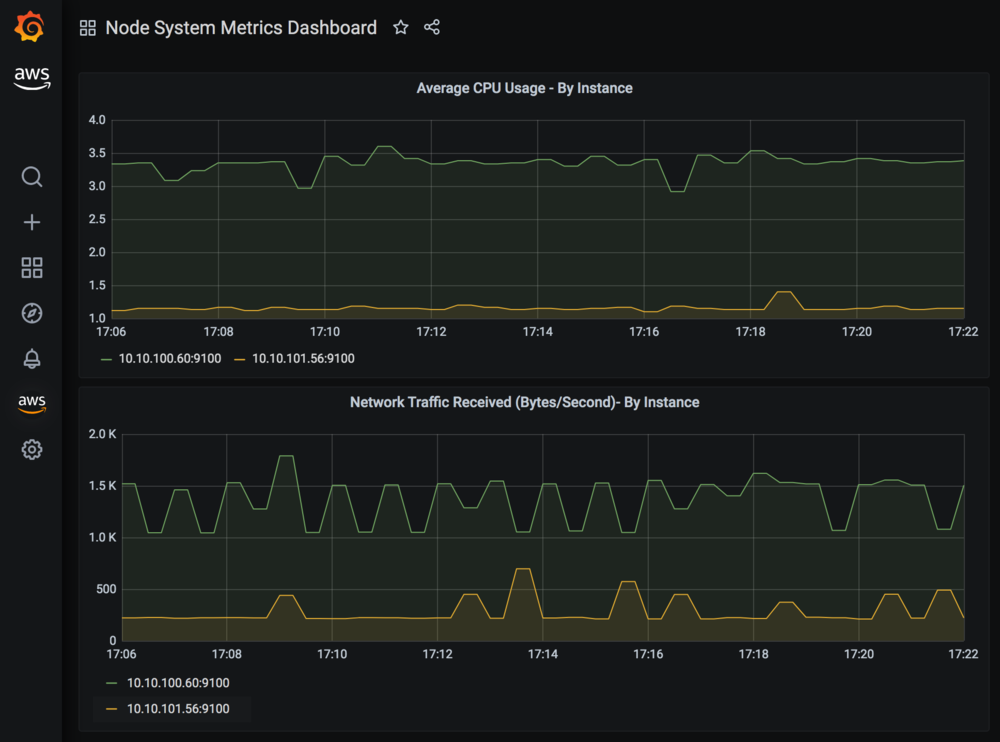 Customers running workloads on Amazon ECS have been able to use CloudWatch Container Insights Prometheus agent to collect Prometheus metrics from the environment and ingest into CloudWatch.

Using the solution outlined in this blog post, customers can now collect metrics using Prometheus server with dynamic service discovery using AWS Cloud Map. They also have the option of deploying third-party exporters available for several popular databases to their Amazon ECS cluster, which enables exporting existing metrics from these systems as Prometheus metrics. In conjunction with recently released AWS services, such as Amazon Managed Service for Prometheus and Amazon Managed Service for Grafana, this approach gives customers more open source-based options to choose from for their observability needs on Amazon ECS.