Customers want to have visibility into processes running inside their Amazon Elastic Compute Cloud (Amazon EC2) instances. Critical processes and services in these instances can crash unexpectedly and when they do, it’s crucial for customers to be notified so they can maintain continued business operations.

There are multiple ways to see if a service is running as expected. One way is to instrument the application code to send heartbeats to an observer process at certain intervals. Applications can also expose a liveness or readiness endpoint that can be polled by external monitoring systems to check if it is running and functioning properly. In cases where you don’t want to introduce more observability logic into your application, it’s a common practice to write operating system scripts to watch for the liveness of specific processes. But as an alternative to writing custom scripts, you can use the Amazon CloudWatch agent procstat plugin, which continuously watches specified processes and reports their metrics to Amazon CloudWatch. After the data is in Amazon CloudWatch, you can associate alarms to trigger actions like notifying teams or remediations like restarting the processes, resizing the instances, and so on.

In this blog post, I’ll show you how to use AWS Systems Manager Run Command on EC2 instances to restart the processes that the procstat plugin detected were down.

By completing the steps in this post, you can create a system that uses the following architecture.

The architecture for this system is shown in Figure 1: 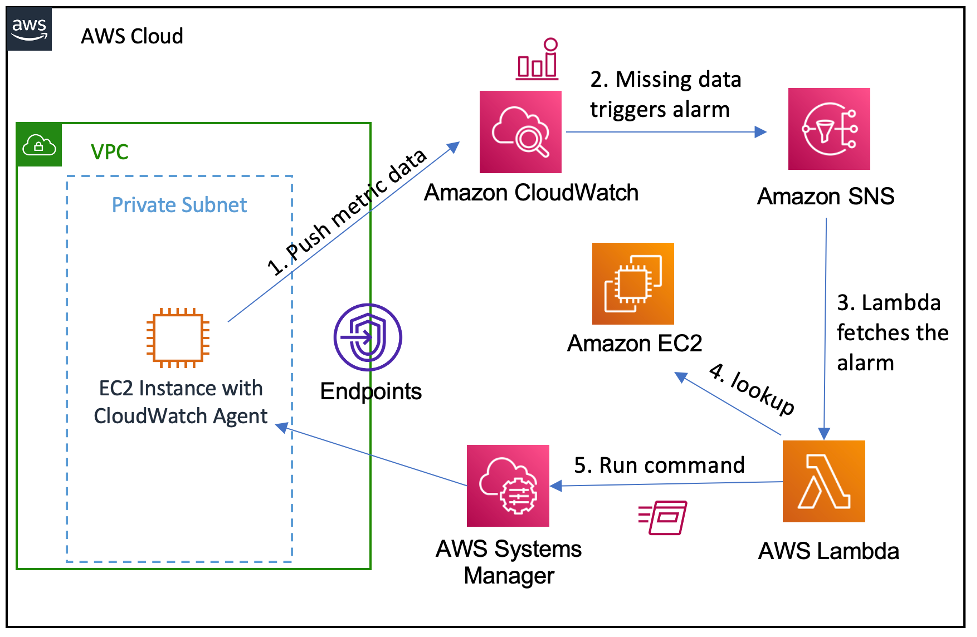 To deploy the sample architecture in your AWS environment, use the AWS CloudFormation template included with this post.

The template creates the following resources in your account:

To start your deployment, use the following link.

After deployment, the stack will provide you the EC2 instance ID in its outputs section. The AWS Systems Manager Agent (SSM Agent) is installed on Amazon Linux instances. The template you deployed performed the network and security configuration required for SSM Agent to communicate with AWS Systems Manager. This means you can use SSM Agent to install software on this instance. You can also install the SSM Agent manually using scripts or configuration management tools like Chef, Puppet, or Ansible. 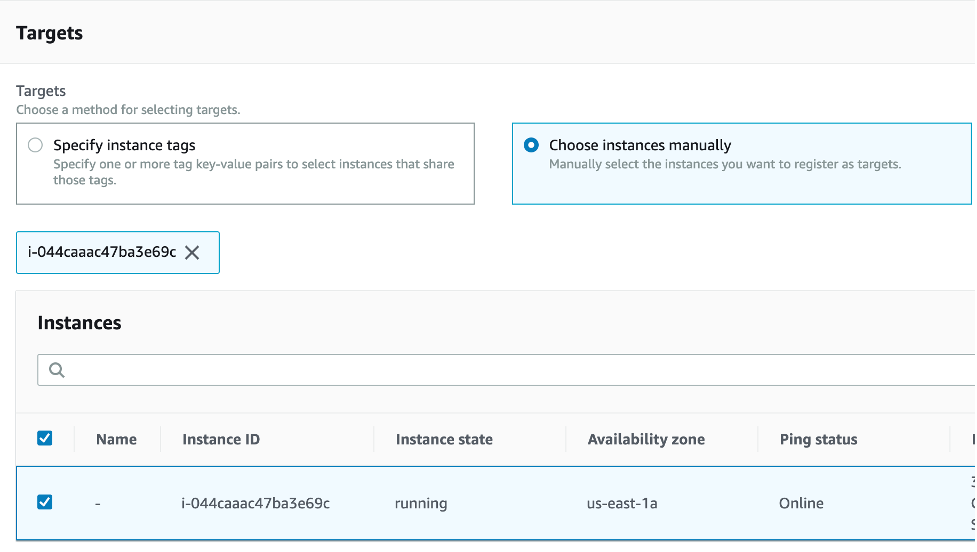 After the status transitions to Success, you can configure the CloudWatch agent.

To configure the agent, connect to the EC2 instance. Because this instance is deployed in a private subnet, you must use Systems Manager to connect to it. 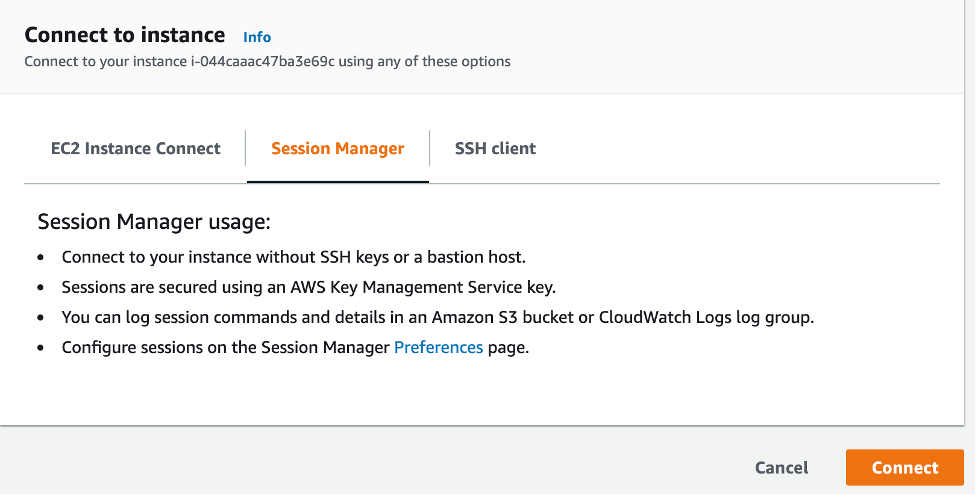 After the connection is successful, create a CloudWatch agent configuration file.

Add the following configuration JSON and then save the file.

This configuration enables the procstat plugin and tells it to monitor the sshd process identified by the sshd.pid file. The plugin will monitor the cpu_usage and memory_rss metrics of this process and send information to Amazon CloudWatch.

Now use the following command to start the CloudWatch agent with its new configuration:

This command will configure the amazon-cloudwatch-agent service on this machine where you can start, stop, and restart with systemctl commands.

You can observe the newly created namespace and its metrics in the CloudWatch console. 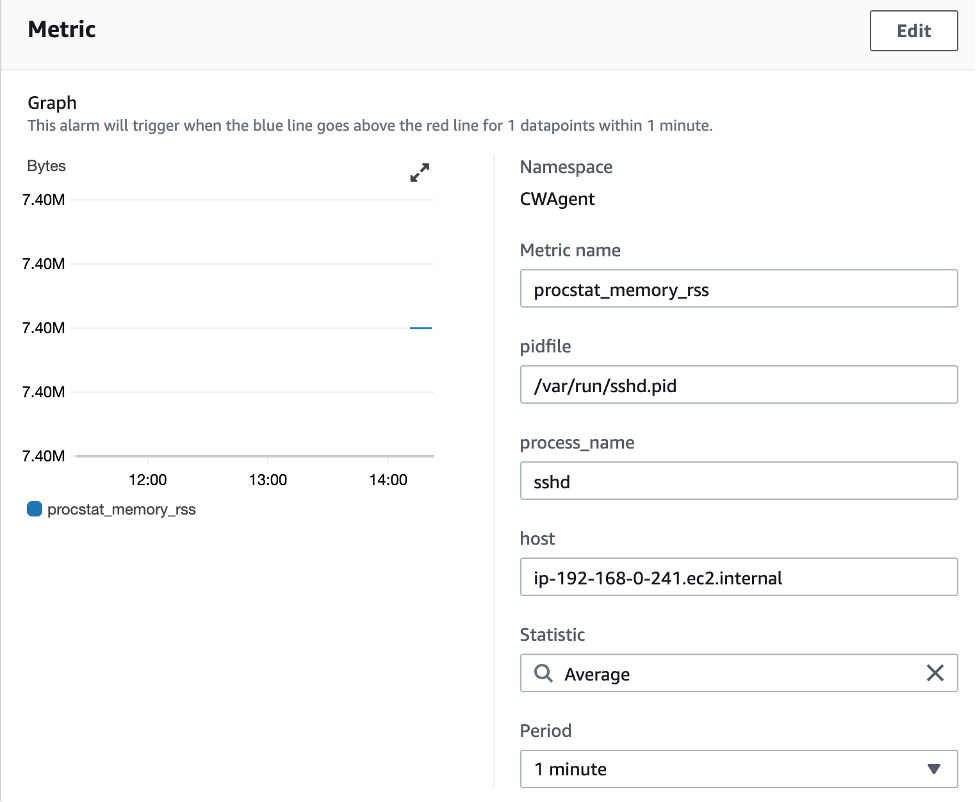 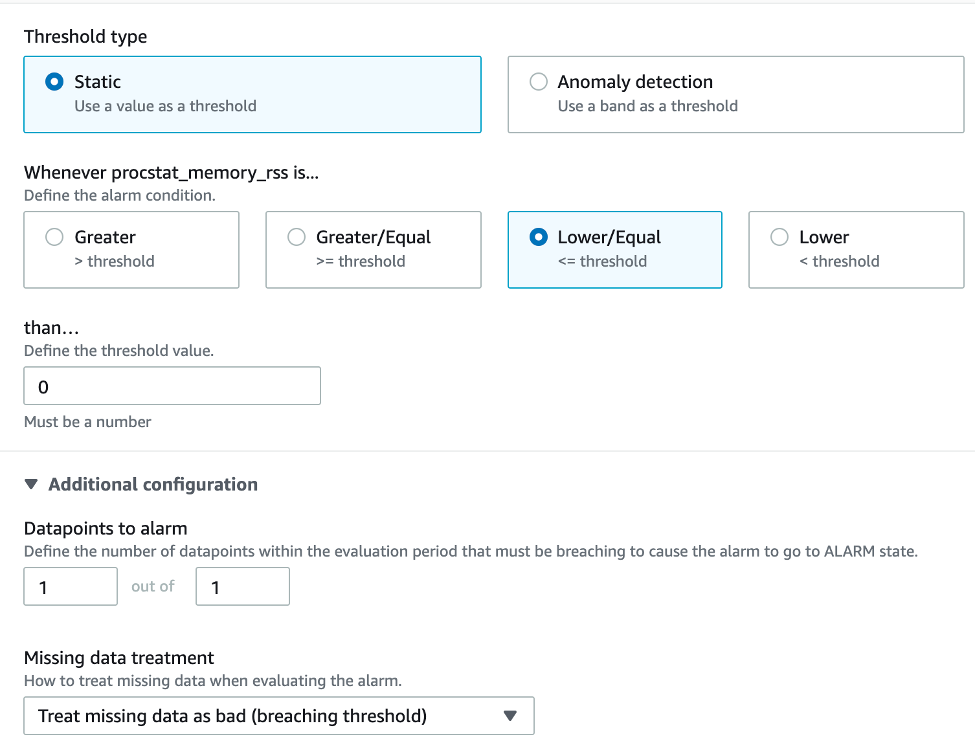 These settings tell CloudWatch to go into the In alarm state if the procstat_memory_rss metric value goes lower or equal to 0, or missing data is detected. Note that a memory consumption metric will never go below or equal to zero for a running process, so this alarm configuration is practically tracking a missing data situation. Whenever the sshd process is stopped or crashed, the operating system will delete its pid file. The CloudWatch agent will detect the deletion and will not emit any metric data as long as the file is missing. This will cause the CloudWatch alarm to go into the In alarm state. 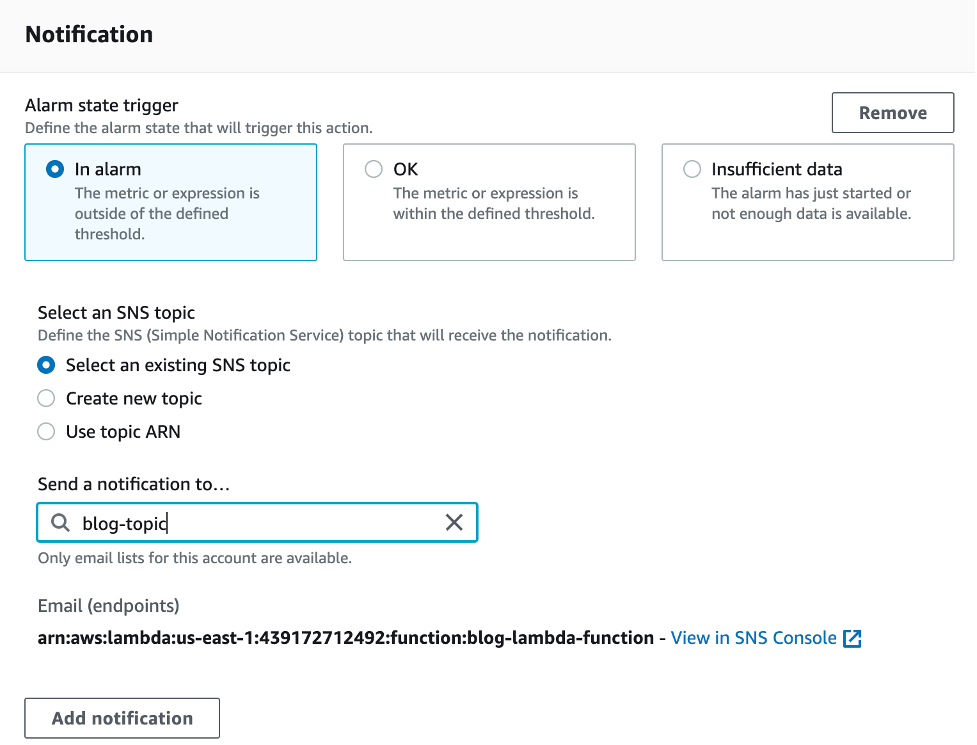 To test your configuration, use Systems Manager to reconnect to your EC2 instance and then issue the following command to make sure the sshd service is already running on the server:

Figure 12: sshd service is running on the instance

Use the following command to stop the service:

Figure 13: sshd service is stopped on the instance

After the daemon is stopped, go to the CloudWatch console to observe the alarm condition. The alarm will go into the In alarm state in about five minutes.

When this happens, CloudWatch will notify the SNS topic, which will then trigger a Lambda function. The Lambda function will fetch the host ID from the SNS message payload and do a lookup against the EC2 API to find the instance ID. It will use this ID to send the Run Command API call. While the Lambda function is executing this operation, logs will be created. At this point, the sshd service comes back up and the agent will start emitting its metrics. The arrival of metrics will transition the alarm state back to OK.

In the CloudWatch console, check the alarm until it goes into the OK state, reconnect to the EC2 instance, and then use the following command to check the service status.

Observe the active status of the process in the output of the command.

Figure 15: sshd service is running on the instance

The Amazon CloudWatch agent can be used on your EC2 instances and on-premises servers. It provides a reliable way to collect process liveness information. This way, customers can be notified when critical processes and services go down unexpectedly which will allow them to take remedial actions for continued business operations.

In this blog post, I showed you how to build fully automated processes that can detect and act upon service or process crashes using AWS System Manager Run Command. The architecture used includes the  procstat plugin to monitor processes metrics. An alarm attached to this metric was triggered because of a missing data, indicating a crashed process. This alarm then triggered a Lamda function to issue the Run Command to restart the process if there is an issue.

You can watch critical processes and services in your servers and remediate them quickly by using these AWS automation capabilities.

Modern DevOps practices require development teams to continuously iterate their applications based on customer feedback. These iterations are mostly comprised of the introduction of new features within the application, or tuning the applications to cope Read more…

License Flexibility Many organizations have an existing investment in Microsoft licenses. This includes licenses for the Windows Server Operating System and Microsoft SQL Server. Customers who have decided to migrate to AWS often want to Read more…