Cloud Custodian is an open source, cloud security, governance, and management tool that enables users to keep their Amazon Web Services (AWS) environment secure and well managed by defining policies in a YAML domain specific language (DSL). Cloud Custodian works by defining policies in a YAML file and running the defined policies against AWS accounts. The policy definition contains the type of resource the policy will be run against and filters to narrow down within a specific resource type as well as actions to take on the resources captured by the filter.

Cloud Custodian policies can run within an AWS account in various serverless modes using AWS Lambda and Amazon CloudWatch Events; however, to initially deploy these policies, customers often have to maintain a separate compute environment that will be used deploy them. Also, in a multi-account AWS environment (for example, AWS Control Tower where AWS accounts are provisioned programmatically using AWS Organizations as needed), deploying Cloud Custodian to new AWS accounts will require manual work.

The AWS Control Tower service is intended for organizations with multiple accounts and teams who are looking for the easiest way to set up their new multi-account AWS environment and govern at scale. With AWS Control Tower, cloud administrators get peace of mind knowing accounts in their organization are compliant with established policies while builders provision new AWS accounts quickly in a few clicks.

In this post, we will demonstrate how AWS DevOps tools can be used to achieve continuous, at-scale deployment of Cloud Custodian policies to AWS Control Tower without provisioning a separate compute environment. We will also show how these policies will be deployed automatically to all new AWS accounts provisioned by AWS Control Tower without any manual intervention. 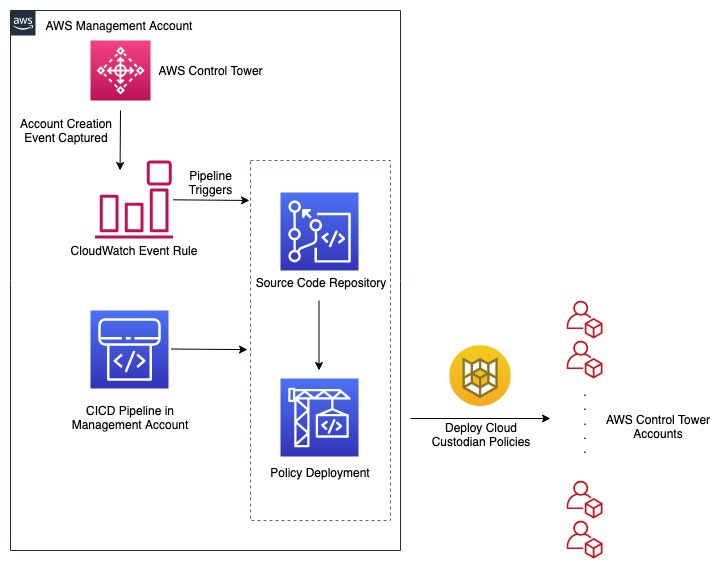 The source code for this article, including CloudFormation templates and sample cloud custodian policies, can be downloaded from this repository.

In this step, we will store all of the code used in this article in the AWS CodeCommit repository created in Step 1.

In this step, we will set up the CI/CD pipeline that will use all the resources that have been deployed in previous steps to orchestrate the deployment of CloudCustodian Policies.

Repeat the same step for CloudWatch Event Rules. You should see event rules starting with custodian-.

In this section, we will show how to clean up the resources deployed from this post.

In this article, we have shown how the open source cloud security and management tool Cloud Custodian can be integrated into an AWS Control Tower environment for an easier and scalable deployment of compliance policies across accounts within an AWS Organization. Using this approach in addition to the out-of-the-box capabilities of AWS Control Tower, cloud administrators can further ensure that accounts in their organization are compliant with established policies.

Social: Events in the Community CDK Day is coming up on April 30th! This is your chance to meet and engage with the CDK Community! Last year’s event included an incredible amount of content, whether Read more…