Jenkins is a popular open-source automation server that enables developers around the world to reliably build, test, and deploy their software. Jenkins uses a controller-agent architecture in which the controller is responsible for serving the web UI, stores the configurations and related data on disk, and delegates the jobs to the worker agents that run these jobs as their primary responsibility.

Amazon Elastic Container Service (Amazon ECS) is a fully managed container orchestration service, and has been a popular choice to deploy a highly available, fault tolerant, and scalable Jenkins environment. Traditionally, the Amazon Elastic Compute Cloud (Amazon EC2) launch type was the preferred choice, with Amazon Elastic Block Store (Amazon EBS) as the storage for the configurations and data. That changed with the introduction of AWS Fargate support for Amazon EFS.

The objective of this post is to walk you through how to set up a completely serverless Jenkins environment on AWS Fargate using Terraform.

Overview of the solution 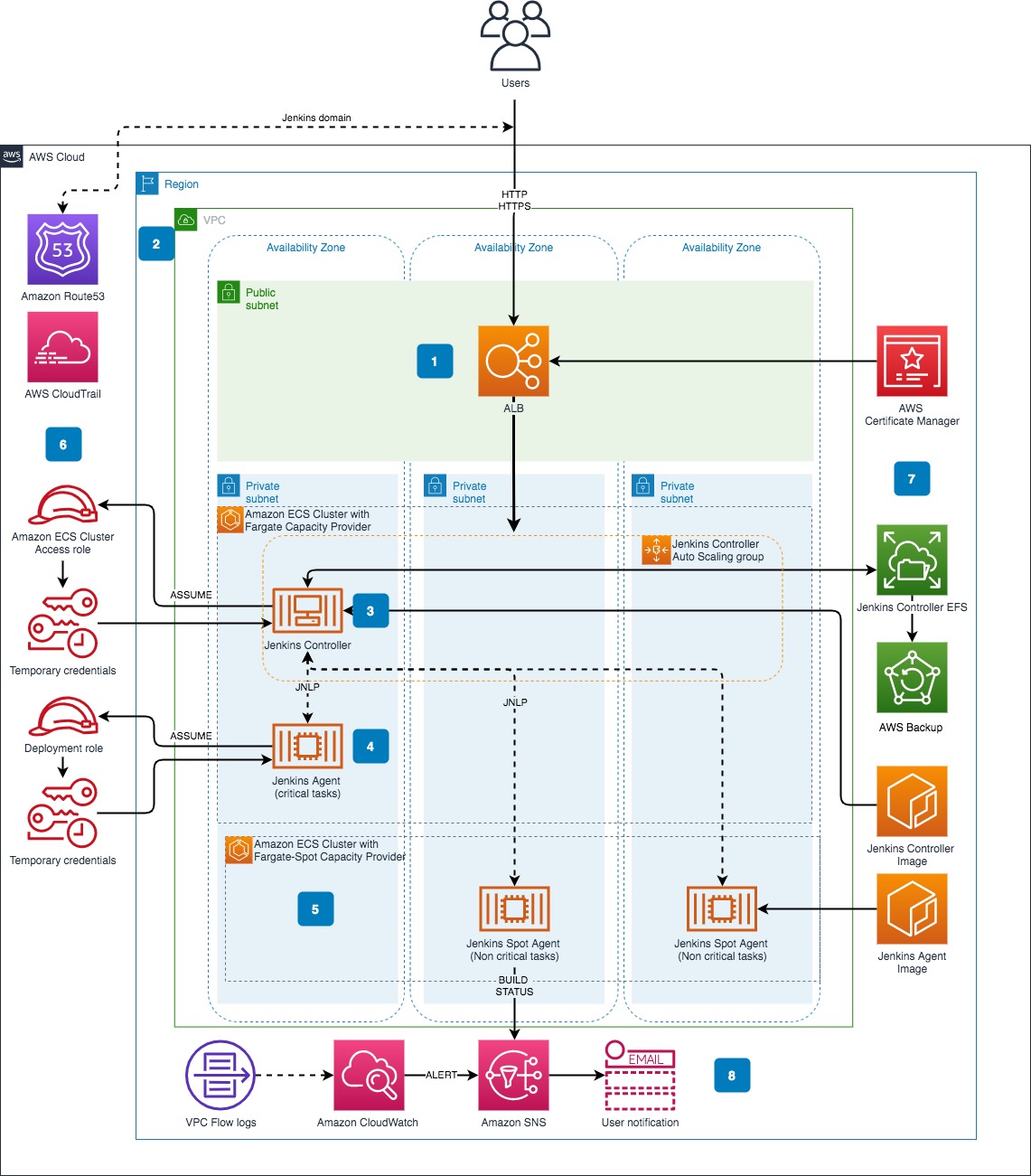 The objective is to create a fully automated deployment of highly available, production-ready Jenkins in a serverless environment on AWS. We use the following components and services:

For this post, we developed a Terraform module to perform the deployment. The module and deployment example scripts are available in the GitHub repo. Refer the README for a list of all module variables. The following are required to deploy this Terraform module:

All the required resources and configurations are packaged as a Terraform module, which means it’s not directly deployable. However, an example deployment is in the example directory. To deploy the example, complete the following steps:

Included in this directory is sample Terraform code to bootstrap the initial Terraform state management resources. A best practice is to use a state backend such as Amazon S3 and a locking mechanism such as DynamoDB when using Terraform. For more information, see State Storage and Locking. Because this bootstrap code creates Terraform state management resources, special care must be taken to save the resultant Terraform state file. Be aware that this state is only saved to a local file named terraform.tfstate. Make sure to save this state file if you want to maintain the S3 state bucket and DynamoDB lock table using Terraform.

After you deploy all the resources, you can open a browser of your choice and enter the Route 53 alias record name. This opens the Jenkins web UI. Sign in with the user ecsuser and the password stored in the parameter store. All the plugins mentioned in the plugins.txt are also installed, and the Fargate container service cloud configurations are applied. Two clouds are created: one for Fargate and the other for the Fargate Spot cluster. The following screenshot shows the Fargate cloud. 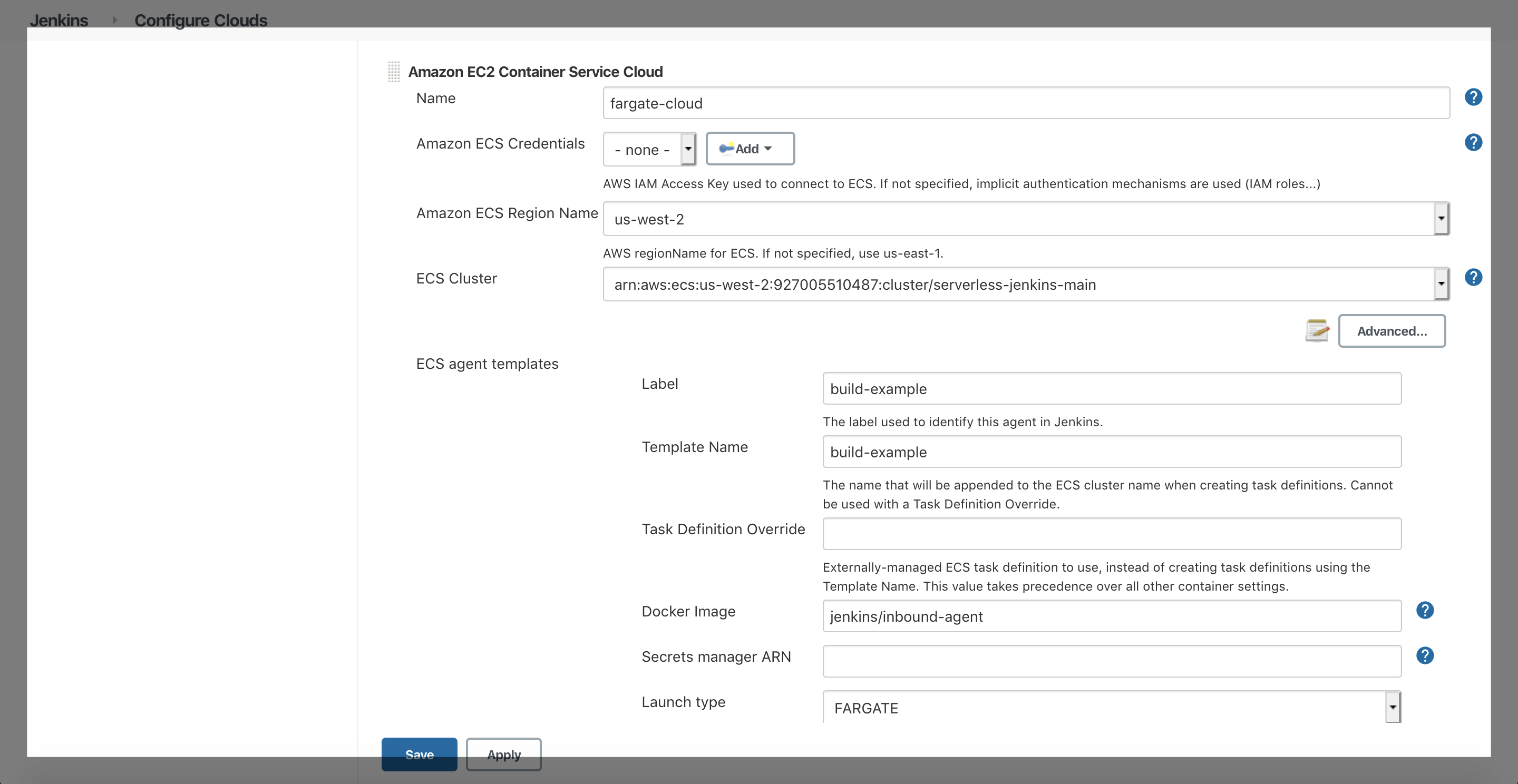 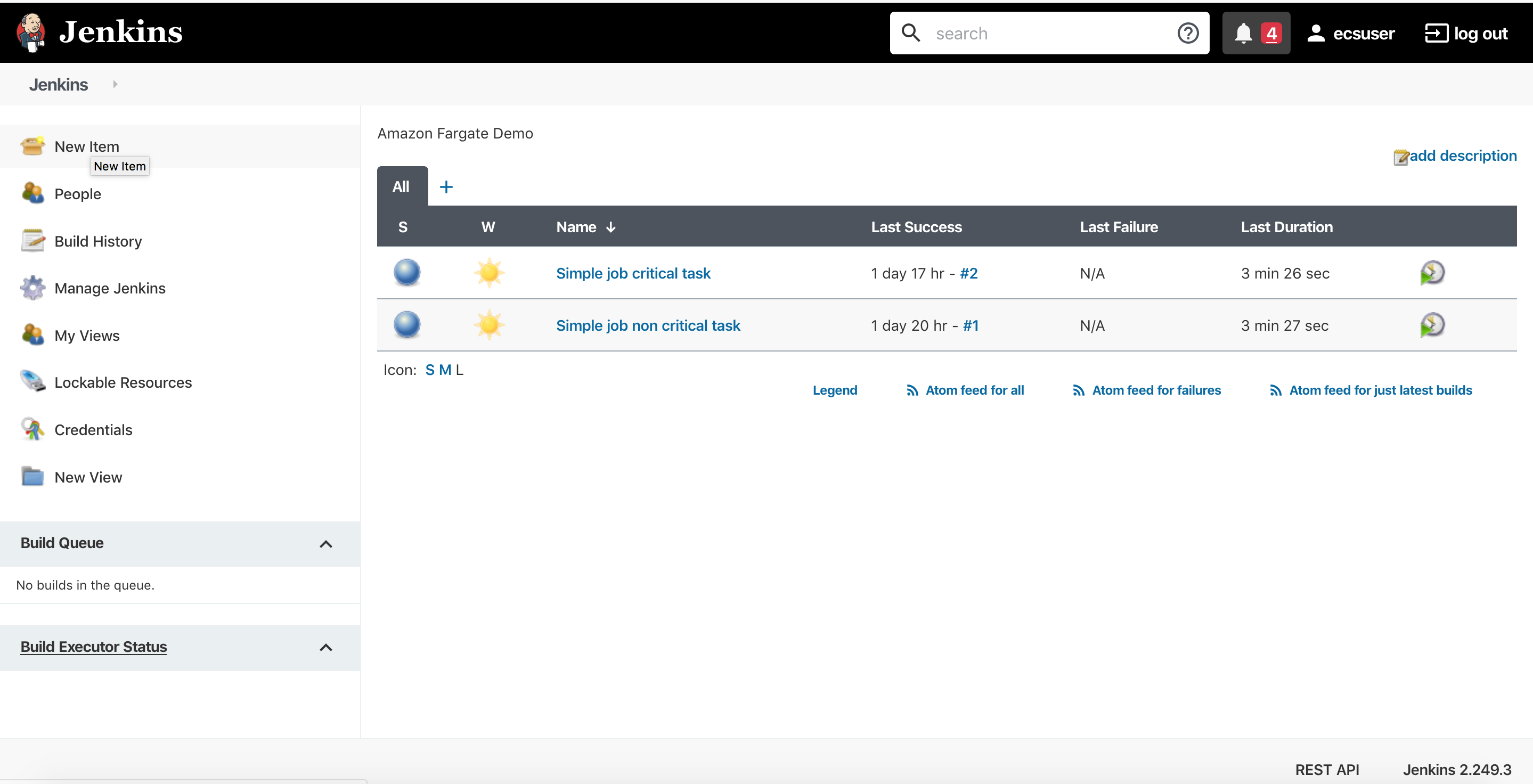 Before we dive into those jobs, let’s take a look at capacity providers.

To test the solution, let’s first run the Simple Job Critical Task by choosing Build Now. This creates a task in the cluster with the FARGATE capacity provider. 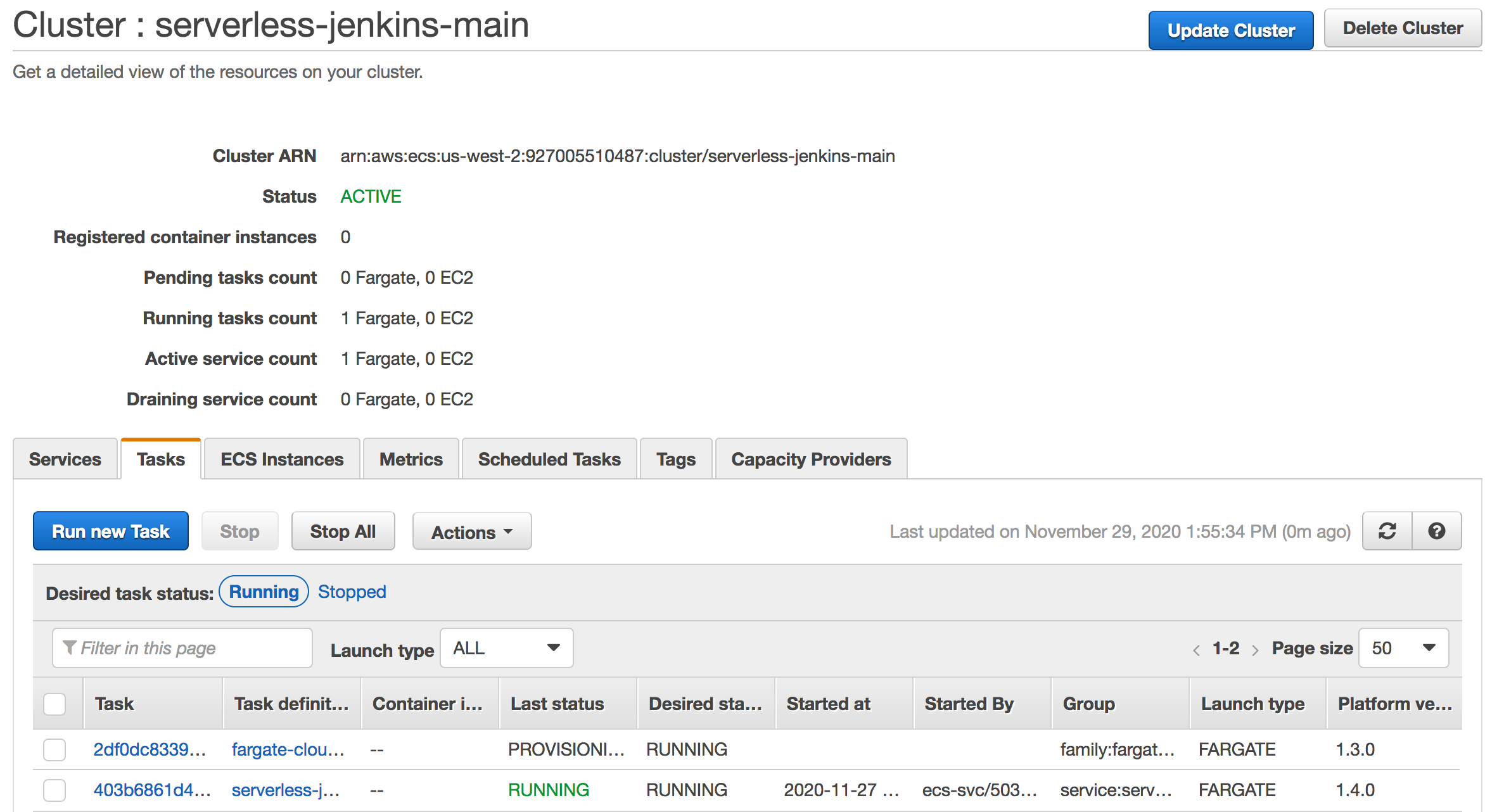 When the task is in Running state, it registers itself as an agent and the Jenkins job runs on this agent.

You can see the console output in Jenkins.

When the job is successful, the task is stopped.

Because Amazon EFS is network attached storage, in its default configuration it may not be performant enough for some Jenkins use cases. Proper research and testing is advised before using Amazon EFS for productive workloads. For more information, see Amazon EFS performance.

If necessary, set Amazon EFS to maximum I/O mode. You can do this in the Terraform module by setting the variable efs_performance_mode to maxIO. For more information, see What are the differences between General Purpose and Max I/O performance modes in Amazon EFS?

In this post, we went through how to deploy a highly available, scalable, fault tolerant, production-ready Jenkins environment in a completely serverless environment on Fargate. We also showed how to use the Terraform module to automate the deployment of all the necessary resources and associated configurations. The post also introduced how to use FARGATE and FARGATE_SPOT capacity providers.

When we deploy each job in its own Docker container, we can control the CPU and memory requirements for each job, the base container that defines the environment, the tooling necessary for the job, and more importantly not load the controller with job runs.

AWS re:Invent is a learning conference hosted by Amazon Web Services for the global cloud computing community. We are super excited to join you at the 10th annual re:Invent to share the latest from AWS Read more…

DevOps is a common denominator for software delivery across industries. No matter the software, developers must ensure that infrastructure resources are provisioned; testing and delivery mechanisms are in place; and security, reliability, and scalability requirements Read more…