This post is written by Gopi Krishnamurthy, Senior Solutions Architect.

Continuous integration and continuous deployment (CI/CD) is one of the major DevOps components. This allows you to build, test, and deploy your applications rapidly and reliably, while improving quality and reducing time to market.

GitHub is an AWS Partner Network (APN) with the AWS DevOps Competency. GitHub Actions is a GitHub feature that allows you to automate tasks within your software development lifecycle. You can use GitHub Actions to run a CI/CD pipeline to build, test, and deploy software directly from GitHub.

The AWS Serverless Application Model (AWS SAM) is an open-source framework for building serverless applications. It provides shorthand syntax to express functions, APIs, databases, and event source mappings. With a few lines per resource, you can define the application you want and model it using YAML.

In this post, you learn how to create a sample serverless application using AWS SAM. You then use GitHub Actions to build, and deploy the application in your AWS account.

AWS has released a GitHub action called setup-sam to install AWS SAM, which is pre-installed on GitHub hosted runners. You can use this action to install a specific, or the latest AWS SAM version.

This demo uses AWS SAM to create a small serverless application using one of the built-in templates. When the code is pushed to GitHub, a GitHub Actions workflow triggers a GitHub CI/CD pipeline. This builds, and deploys your code directly from GitHub to your AWS account.

You can create a serverless application by defining all required resources in an AWS SAM template. AWS SAM provides a number of quick-start templates to create an application.

This creates an AWS SAM application in the root of the repository named github-actions-with-aws-sam, using the default configuration. This consists of a single AWS Lambda Python 3.8 function invoked by an Amazon API Gateway endpoint.

AWS SAM allows you to test your applications locally. AWS SAM provides a default event in events/event.json that includes a message body of {\"message\": \"hello world\"}.

The API response should be:

GitHub CI/CD pipelines are configured using a YAML file. This file configures what specific action triggers a workflow, such as push on main, and what workflow steps are required.

In the root of the repository containing the files generated by sam init, create the directory: .github/workflows. 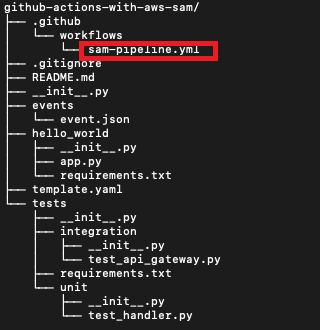 The configuration triggers the GitHub Actions CI/CD pipeline when code is pushed to the main branch. You can amend this if you are using another branch. For a full list of supported events, refer to GitHub documentation page.

You can further customize the sam build –use-container command if necessary. By default the Docker image used to create the build artifact is pulled from Amazon ECR Public. The default Python 3.8 image in this example is based on the language specified during sam init. To pull a different container image, use the --build-image option as specified in the documentation.

The AWS CLI and AWS SAM CLI are installed in the runner using the GitHub action setup-sam. To install a specific version, use the version parameter.

As part of the CI/CD process, we recommend you scan your code for quality and vulnerabilities in bundled libraries. You can find these security offerings from our AWS Lambda Technology Partners.

These credentials are stored as GitHub secrets within your GitHub repository, under Settings > Secrets. For more information, see “GitHub Actions secrets”.

In your GitHub repository, create two secrets named AWS_ACCESS_KEY_ID and AWS_SECRET_ACCESS_KEY and enter the key values. We recommend following IAM best practices for the AWS credentials used in GitHub Actions workflows, including:

Add all the files to your local git repository, commit the changes, and push to GitHub.

Once the files are pushed to GitHub on the main branch, this automatically triggers the GitHub Actions CI/CD pipeline as configured in the sam-pipeline.yml file.

The GitHub actions runner performs the pipeline steps specified in the file. It checks out the code from your repo, sets up Python, and configures the AWS credentials based on the GitHub secrets. The runner uses the GitHub action setup-sam to install AWS SAM CLI.

The pipeline triggers the sam build process to build the application artifacts, using the default container image for Python 3.8.

sam deploy runs to configure the resources in your AWS account using the securely stored credentials.

To view the application deployment progress, select Actions in the repository menu. Select the workflow run and select the job name build-deploy. 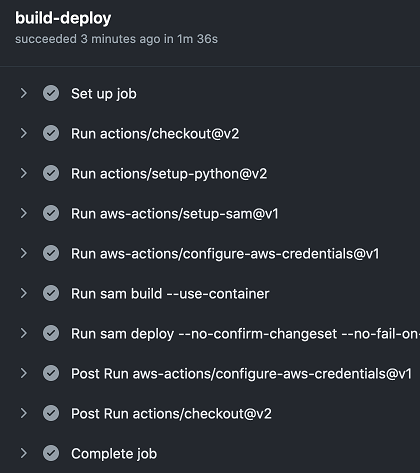 If the build fails, you can view the error message. Common errors are:

The API response should be:
{"message": "hello world"}

To remove the application resources, navigate to the CloudFormation console and delete the stack. Alternatively, you can use an AWS CLI command to remove the stack:

GitHub Actions is a GitHub feature that allows you to run a CI/CD pipeline to build, test, and deploy software directly from GitHub. AWS SAM is an open-source framework for building serverless applications.

The GitHub action setup-sam installed AWS SAM on the GitHub hosted runner. The GitHub Actions workflow uses sam build to create the application artifacts and sam deploy to deploy them to your AWS account.