Tracking the state of Lambda functions

AWS Lambda functions often require resources from other AWS services in order to execute successfully, such as AWS Identity and Access Management (IAM) roles or Amazon Virtual Private Cloud (Amazon VPC) network interfaces. When you create or update a function, Lambda provisions the required resources on your behalf that enable your function to execute. In most cases, this process is very fast, and your function is ready to be invoked or modified immediately. However, there are situations where this action can take longer.

To better communicate the current “state” of your function when resources are being created or updated, AWS Lambda now includes several additional attributes in the function information returned by several Lambda API actions. This change does not impact the way that functions are invoked or how your code is
executed. In this post we cover the various states your Lambda function can be in, the conditions that lead to them, and how the Lambda service transitions the function through different states. You can also read more about this in the AWS Lambda documentation, Monitoring the State of a Function with the Lambda API.

All about function states

There are two main lifecycles that a Lambda function goes through, depending on if it is being created for the first time or existing and being updated. Before we go into the flows, let’s cover what the function states are:

Pending is the first state that all functions go through when they are created. During Pending Lambda attempts to create or configure any external resources. A function can only be invoked while in the Active state and so any invocations or other API actions that operate on the function will fail. Any automation built around invoking or updating functions immediately after creation must be modified to first see if the function has transitioned from Pending to Active.

Active is reached after any configuration or provisioning of resources has completed during the initial creation of a function. Functions can only be invoked in the Active state.

During a function update, the state remains set to Active, but there is a separate attribute called LastUpdateStatus, which represents the state of an update of an active function. During an update, invocations execute the function’s previous code and configuration until it has successfully completed the update operation, after which the new code and configuration is used.

Failed is a state that represents something has gone wrong with either the configuration or provisioning of external resources.

For all states, there are two other attributes that are set: StateReason and StateReasonCode. Both exist for troubleshooting issues and provide more information about the current state.

LastUpdateStatus represents a child lifecycle of the main function states lifecycle. It only becomes relevant during an update and signifies the changes a function goes through. There are three statuses associated with this:

InProgress signifies that an update is happening on an existing function. While a function is in the InProgress status, invocations go to the function’s previous code and configuration.

Successful signifies that the update has completed. Once a function has been updated, this stays set until a further update.

Failed signifies that the function update has failed. The change is aborted and the function’s previous code and configuration remains in the Active state and available.

The transition of a function from one state to another is completely dependent on the actions taken against it. There is no way for you to manually move a function between states. 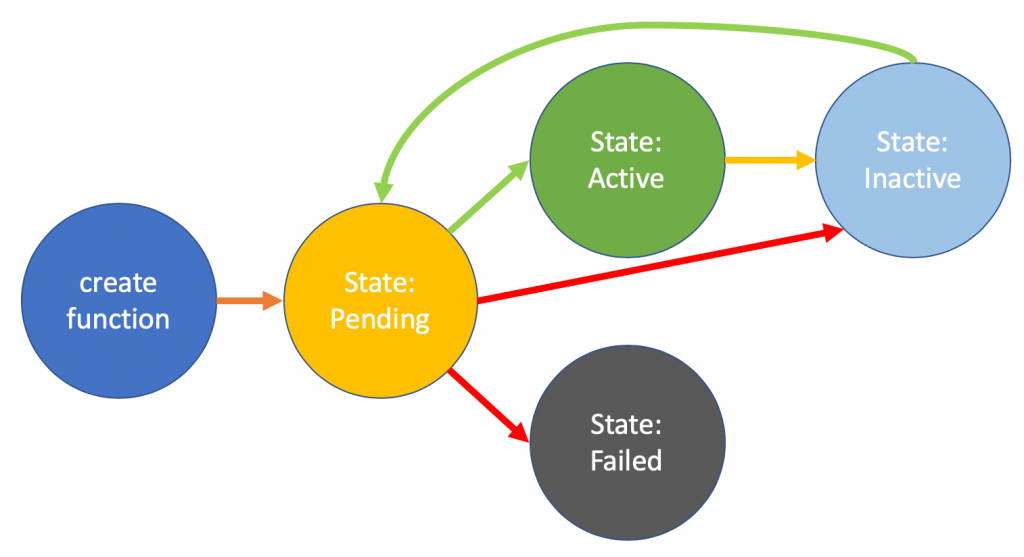 For all functions the primary state lifecycle looks like this: 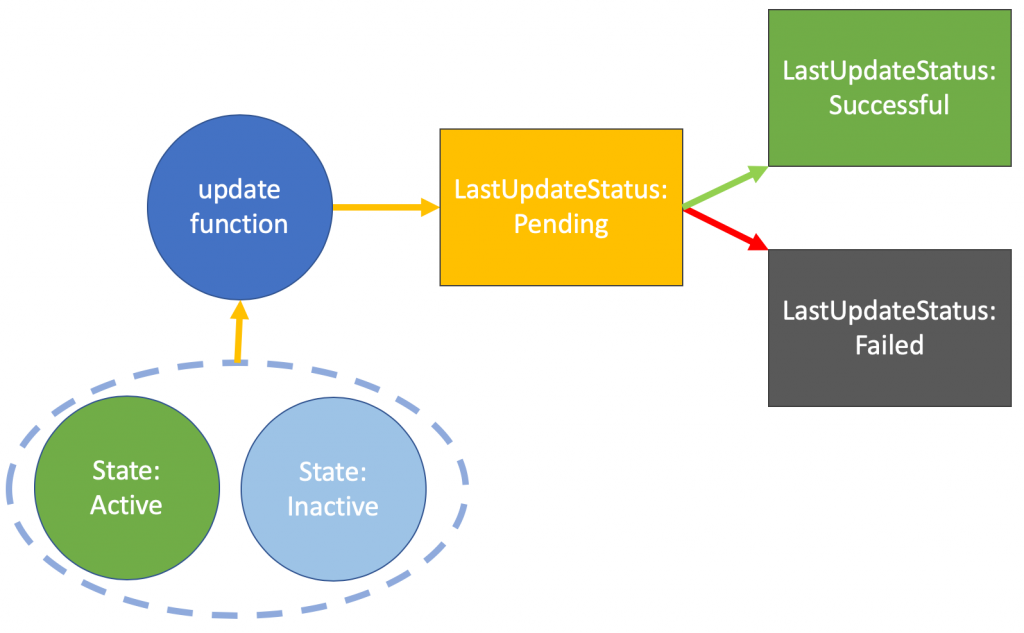 You can query the current state of the function using the latest AWS SDKs and AWS CLI (version 1.16.291 or greater). To make it easy for you to write the code to check the state of a function we’ve added a new set of Waiters to the AWS SDKs. Waiters are a feature of certain AWS SDKs that can be used when AWS services have asynchronous operations, that you would need to poll for a change in their state or status. Using waiters removes the need to write complicated polling code and make it easy to check the state of a Lambda function. You can find out more about these in the documentation for each SDK: Python, Node.js, Java, Ruby, Go, and PHP.

Starting today, all functions today will show an Active state only. You will not see a function transition from Pending at all.

Our first feature leveraging the function states lifecycle, will be a change to the recently announced improved VPC networking for AWS Lambda functions. As stated in the announcement post, Lambda precreates the ENIs required for your function to connect to your VPCs, which can take 60 to 90 seconds to complete. We will be changing this process slightly, by creating the required ENI resources while the function is placed in a Pending state and transitioning to Active after that process is completed. Remember, any invocations or other API actions that operate on the function will fail during the time before the function is Active. We will roll this behavior out for VPC configured functions in a phased manner, and will provide further details about timelines, and approaches to test before it is 100% live, in an upcoming post.

Until then, we encourage you to update the tooling you use to deploy and manage Lambda-based applications to confirm that your function is in the Active state before trying to invoke or perform other actions against them.  If you use AWS tools like AWS CloudFormation or AWS SAM, or tools from Lambda’s partners to deploy and manage your functions, there is no further action required.

Welcome to the eighth edition of the AWS Serverless ICYMI (in case you missed it) quarterly recap. Every quarter, we share the most recent product launches, feature enhancements, blog posts, webinars, Twitch live streams, and Read more…