Massively multiplayer online (MMO) game servers must dynamically scale their compute and storage to create a world-scale persistence simulation with millions of dynamic objects, such as complex AR/VR synthetic environments that match real-world fidelity. The Elastic Kubernetes Service (EKS) powered by Amazon EC2 Spot and Aurora Serverless allow customers to create world-scale persistence simulations processed by numerous cost-effective compute chipsets, such as ARM, x86, or Nvidia GPU. It also persists them On-Demand — an automatic scaling configuration of open-source database engines like MySQL or PostgreSQL without managing any database capacity. This post proposes a fully open-sourced option to build, deploy, and manage MMOs on AWS. We use a Python-base game server to demonstrate the MMOs.

Increasing competition in the gaming industry has driven game developers to architect cost-effective game servers that can scale up to meet player demands and scale down to meet cost goals. AWS enables MMO developers to scale their game beyond the limits of a single server. The game state (world) can spatially partition across many Regions based on the requested number of sessions or simulations using Amazon EC2 compute power. As the game progresses over many sessions, you must track the simulation’s global state. Amazon Aurora maintains the global game state in memory to manage complex interactions, such as hand-offs across instances and Regions. Amazon Aurora Serverless powers all of these for PostgreSQL or MySQL.

This blog shows how to use a commodity server using an ephemeral disk and decouple the game state from the game server. We store the game state in Aurora for PostgreSQL, but you can also use DynamoDB or KeySpaces for the NoSQL case.

We use a Minecraft clone to demonstrate a distributed persistence simulation. The game server is python-based deployed on Agones, an open-source multiplayer dedicated game-server platform on Kubernetes. The Kubernetes cluster is powered by EC2 Spot Instances and configured with EC2 instances to auto-scale that expands and shrinks the compute seamlessly upon game-server allocation. We add a git-ops-based continuous delivery system that stores the game-server binaries and config in a git repository and deploys the game in a cluster deploy in one or more Regions to allow global compute scale. The following image is a diagram of the architecture. 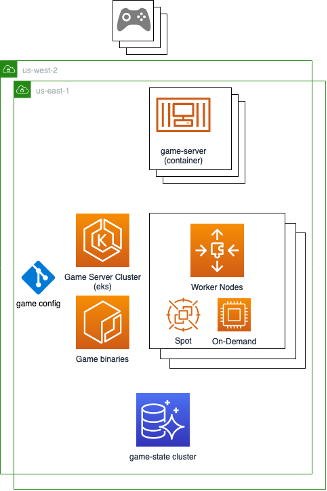 The game server persists every object in an Aurora Serverless PostgreSQL-compatible edition. The serverless database configuration aids automatic start-up and scales capacity up or down as per player demand. The world is divided into 32×32 block chunks in the XYZ plane (Y is up). This allows it to be “infinite” (PostgreSQL Bigint type) and eases data management. Only visible chunks must be queried from the database.

The y positions of blocks are limited to 0 <= y < 256. The upper limit is essentially an artificial limitation that prevents users from building tall structures. Users cannot destroy blocks at y = 0 to avoid falling underneath the world. 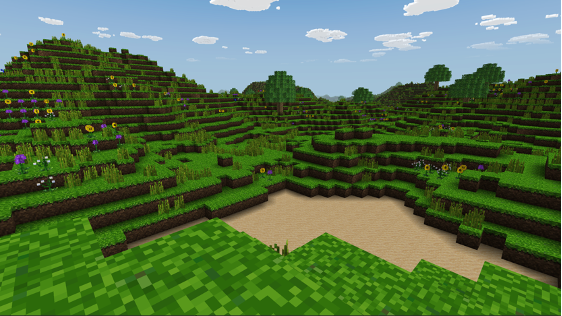 Kubernetes allows dedicated game server scaling and orchestration without limiting the compute platform spanning across many Regions and staying closer to the player. For simplicity, we use EKS to reduce operational overhead.

Amazon EC2 runs the compute simulation, which might require different EC2 instance types. These include compute-optimized instances for compute-bound applications benefiting from high-performance processors or accelerated compute (GPU), using hardware accelerators to perform functions like graphics processing or data pattern matching. In addition, the EC2 Auto Scaling  runs the game-server configured to use Amazon EC2 Spot Instances in order to allow up to 90% discount as compared to On-Demand Instance prices. However, Amazon EC2 can interrupt your Spot Instance when the demand for Spot Instances rises, when the supply of Spot Instances decreases, or when the Spot price exceeds your maximum price. 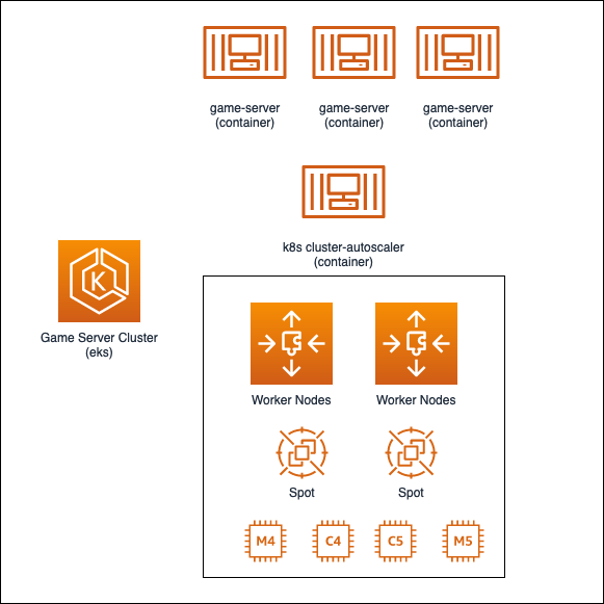 The complete working spec is available in https://github.com/aws-samples/spotable-game-server/blob/master/specs/cluster_autoscaler.yml.

We propose the following two options to minimize player impact during interruption. The first is based on two-minute interruption notification, and the second on rebalance recommendations.

Choosing between the two depends on the transition you want for the player. Both cases deploy DaemonSet that listens to either notification and notifies every game server running on the EC2 instance. It also prevents new game-servers from running on this instance.

The daemon set pulls from the instance metadata every five seconds denoted by POLL_INTERVAL as follows:

where NOTICE_URL can be either

Or, for the second option:

The command that notifies all the game-servers about the interruption is:

From that point, every game server that runs on the instance gets notified by the Unix signal SIGTERM.

In our example server.py, we tell the OS to signal the Python process and complete the sig_handler function. The example prompts a message to every connected player regarding the incoming interruption.

Agones orchestrates game servers via declarative configuration in order to manage groups of ready game-servers to play. It also offers integrated SDK for managing game server lifecycle, health, and configuration. Finally, it runs on Kubernetes, so it is an all-up open-source platform that runs anywhere. The Agones SDK is easily implemented. Furthermore, combining the compute platform AWS and Agones offers the most secure, resilient, scalable, and cost-effective method for running an MMO.

In our example, we implemented the /health in agones_health and /allocate in agones_allocate calls. Then, the agones_health() called upon the server init to indicate that it is ready to assign new players.

The agones_health() using the native health and relay its health to keep the game-server in a viable state.

Other ways than Agones on EKS?

Configuring an Agones group of ready game-servers behind a load balancer is difficult. Agones game-servers endpoint must be published so that players’ clients can connect and play. Agones creates game-servers endpoints that are an IP and port pair. The IP is the public IP of the EC2 Instance. The port results from PortPolicy, which generates a non-predictable port number. Hence, make it impossible to use with load balancer such as Amazon Network Load Balancer (NLB).

Suppose you want to use a load balancer to route players via a predictable endpoint. You could use the Kubernetes Deployment construct and configure a Kubernetes Service construct with NLB and no need to implement additional SDK or install any additional components on your EKS cluster.

The following example defines a service craft-svc that creates an NLB that will route TCP connections to Pod targets carrying the selector craft and listening on port 4080.

The game server Deployment set the metadata label for the Service load balancer and the port.

Furthermore, the Kubernetes readinessProbe and livenessProbe offer similar features as the Agones SDK /allocate and /health implemented prior, making the Deployment option parity with the Agones option.

Overview of the Database

The compute layer running the game could be reclaimed at any time within minutes, so it is imperative to continuously store the game state as players progress without impacting the experience. Furthermore, it is essential to read the game state quickly from scratch upon session recovery from an unexpected interruption. Therefore, the game requires fast reads and lazy writes. More considerations are consistency and isolation. Developers could handle inconsistency via the game in order to relax hard consistency requirements. As for isolation, in our Craft example players can build a structure without other players seeing it and publish it globally only when they choose.

Choosing the proper database for the MMO depends on the game state structure, e.g., a set of related objects such as our Craft example or a single denormalized table. The former fits the relational model used with RDS or Aurora open-source databases such as MySQL or PostgreSQL. While the latter can be used with Keyspaces, an AWS managed Cassandra, or a key-value store such as DynamoDB. Our example includes two options to store the game state with Aurora Serverless for PostgreSQL or DynamoDB. We chose those because of the ACID support. PostgreSQL offers four isolation levels: dirty read, nonrepeatable read, phantom read, and serialization anomaly. DynamoDB offers two isolation levels: serializable and read-committed. Both databases’ options allow the game developer to implement the best player experience and avoid additional implementation efforts.

Moreover, both engines offer Restful connection methods to the database. Aurora uses Data API. The Data API doesn’t require a persistent DB cluster connection. Instead, it provides a secure HTTP endpoint and integration with AWS SDKs. Game developers can run SQL statements via the endpoint without managing connections. DynamoDB only supports a Restful connection. Finally, Aurora Serverless and DynamoDB scale the compute and storage to reduce operational overhead and pay only for what was played.

MMOs are unique because they require infrastructure features similar to other game types like FPS or casual games, and reliable persistence storage for the game-state. Unfortunately, this leads to expensive choices that make monetizing the game difficult. Therefore, we proposed an option with a fun game to help you, the developer, analyze what is best for your MMO. Our option is built upon open-source projects that allow you to build it anywhere, but we also show that AWS offers the most cost-effective and scalable option. We encourage you to read recent announcements about these topics, including several at AWS re:Invent 2021.