In the modern cloud computing world, most applications use caching to reduce latency and improve performance for read-heavy workloads. In any application, caching plays an important role and can be applied to various layers such as database, UI layer (Session Management), file system, and operating system.

While implementing caching, it is important to understand whether or not caching particular data will improve performance and reduce load. Issues related to JVM in-memory cache, when used in monolithic applications, are well documented. Since most modern applications are moving toward microservices, a third-party caching service, which will be a good fit with a microservice application, is needed.

In-memory data caching reduces round trips to a remote server or database. It improves application performance and speeds up response time. It also has a couple of drawbacks, particularly in a microservices architecture. If an organization has multiple microservices sharing the same key/value data, the same data must be cached across the microservices.

With the in-memory cache, the same code must be duplicated across the microservices to cache the data. Creating, updating, or deleting data in the cache of an application running across multiple nodes requires refreshing or restarting all the nodes to reflect the changes.

If the application is using in-memory cache and the data is huge, it will slow down and could possibly suffer from long garbage-collection halts. In-memory cache code is tightly coupled with application code and is not easily reusable for other components. Developers face challenges in rewriting code for each component that shares the same cached data.

Forward-thinking application development organizations in the IT industry have been making waves in moving from monolithic applications to microservices. The key characteristic of a microservices architecture is that each individual service is decoupled from other services and each acts as an independent entity.

Caching is a mandatory requirement for building scalable microservices applications. Industries are moving towards deploying microservice applications in the cloud, creating a need for cloud-based services that support distributed cache and are decoupled from application code. Amazon ElastiCache is a fully managed data store of Amazon Web Services that offers two: Redis and Memcached, in-memory data stores that can be used as cache.

Key Features of the Caching Solution

The caching solution must have the following :

In-memory cache stores data in key/value format and supports any data structure such as strings, hashes, lists and sets, so a successfully distributed cloud cache service replacement must also store data in key/value format and support any data structure. AWS ElastiCache for Redis meets all the requirements to replace in-memory cache, while Memcached, intended for simpler applications, does not.

Introduction to AWS ElastiCache for Redis

Redis is a great choice to implement a distributed cache that stores and supports flexible data structures in key/value format. Typically, it is an external service, so many microservices applications or monolithic applications can share the same cache or same cluster.

Since it is an external service, it enables scaling for the higher load without impacting or making changes to the application code. Use of Redis cache provides efficient application performance for read and write operations.

Today, most web applications are built on restful web API over HTTP, which requires a low latency response from the back end. Database caching in AWS ElastiCache for Redis allows a dramatic increase of throughput and reduced data retrieval latency.

In the Web application UI layer, a user’s session data can be cached, speeding up the exchange between the user and the web application.

Why Use AWS Redis Cache?

AWS ElastiCache for Redis has some useful properties, as below:

AWS ElastiCache is accessed through the Amazon Elastic Compute Cloud (EC2) instance; it is not open to the internet. So, a Redis instance in an organization or personal account within a VPC can be accessed via ElastiCache from the EC2 instance within the same VPC.

To access the cache from outside the VPC, but within the same Amazon Network or another VPC, VPC peering must be implemented. AWS ElastiCache for Redis has been exposed as a web service that makes it easy to set up, manage and scale cache in the Cloud. 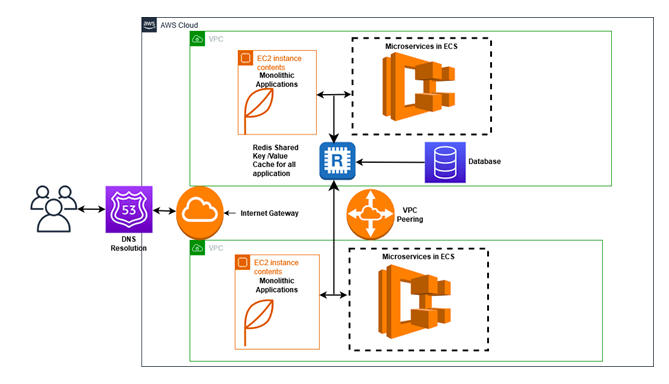 The following are challenges posed when using AWS ElastiCache Redis:

Credit: The content has originally been published on Medium.

It has been over 3 years when Microsoft announced and released a few major changes in the existing Azure certification path, in 2018 at Ignite Conference. This announcement was no less than the beginning of Read more…

Another year has come and gone! I would like to say thank you for being with us in the year 2020! May the new year 2021 bring you 12 months of success, 52 weeks of Read more…

Cloud computing has emerged as a crucial component in the enterprise environment as well as the daily lives of consumers. The capabilities of cloud computing were largely responsible for keeping the global economy afloat during Read more…