The materialized views feature in Amazon Redshift is now generally available and has been benefiting customers and partners in preview since December 2019. One customer, AXS, is a leading ticketing, data, and marketing solutions provider for live entertainment venues in the US, UK, Europe, and Japan. Etleap, an Amazon Redshift partner, is an extract, transform, load, and transform (ETLT) service built for AWS. AXS uses Etleap to ingest data into Amazon Redshift from a variety of sources, including file servers, Amazon S3, relational databases, and applications. These ingestion pipelines parse, structure, and load data into Amazon Redshift tables with appropriate column types and sort and distribution keys.

To analyze data, AXS typically runs queries against large tables that originate from multiple sources. One of the ways that AXS uses Amazon Redshift is to power interactive dashboards. To achieve fast dashboard load times, AXS pre-computes partial answers to the queries dashboards use. These partial answers are orders of magnitude smaller in terms of the number of rows than the tables on which they are based. Dashboards can load much faster than they would if they were querying the base tables directly by querying Amazon Redshift tables that hold the pre-computed partial answers.

Etleap supports creating and managing such pre-computations through a feature called models. A model consists of a SELECT query and triggers for when it should be updated. An example of a trigger is a change to a base table, that is, a table the SELECT statement uses that defines the model. This way, the model can remain consistent with its base tables.

The following screenshot shows an Etleap model with two base table dependencies.

Etleap represents their models as tables in Amazon Redshift. To create the model table, Etleap wraps the SELECT statement in a CREATE TABLE AS (CTAS) query. When an update is triggered, for example, due to base table inserts, updates, or deletes, Etleap recomputes the model table through the following code:

AXS manages a large number of Etleap models. For one particular model, the CTAS query takes over 6 minutes, on average. This query performs an aggregation on a join of three different tables, including an event table that is constantly ingesting new data and contains over a billion rows. The following graph shows that the CTAS query time increases as the event table increases in number of rows. 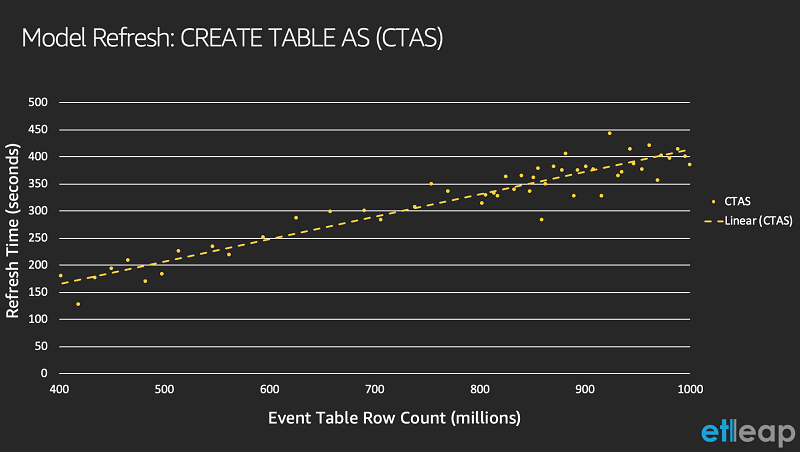 There are two key problems with the query taking longer:

To address this, AXS would have to resort to workarounds that are either inconvenient or costly, such as archiving older data from the event table or expanding the Amazon Redshift cluster to increase available resources. 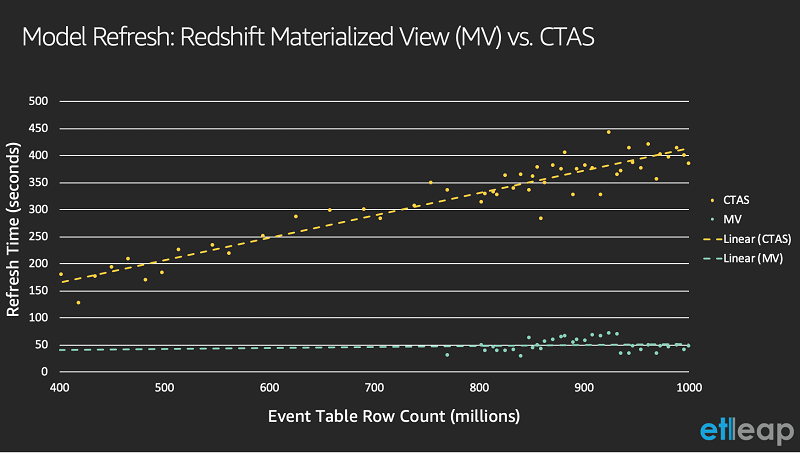 Running REFRESH MATERIALIZED VIEW was 7.9 times faster than the CTAS approach—it took 49 seconds instead of 371 seconds on average at the current scale. Additionally, the update time was roughly proportional to the number of rows that were added to the base table since the last update, rather than the total size of the base table. In this use case, this number is 3.8 million, which corresponds to the approximate number of events ingested per day.

This is great news. The solution solves the previous problems because the delay the model update caused stays constant as new data comes in, and so do the resources that Amazon Redshift consume (assuming the growth of the base table is constant). In other words, using materialized views eliminates the need for workarounds, such as archiving or cluster expansion, as the dataset grows. It also simplifies the refresh procedure for model updates by reducing the number of SQL statements from three (CREATE, DROP, and RENAME) to one (REFRESH).

Now that the materialized views feature is generally available, Etleap gives you the option of using materialized views rather than tables when creating models. You can use models more actively as part of your ETLT strategies, and also choose more frequent update schedules for your models, due to the performance benefits of incremental refreshes.

Christian Romming is the founder and CEO of Etleap.  Etleap is a managed ETL solution for AWS that doesn’t require extensive engineering work to set up, maintain, and scale.

Prasad Varakur is a Database, Big Data & Distributed Systems enthusiast, and Product Manager at Amazon Web Services. Prior to this, he has developed Database and Storage engines at SAP/Sybase, Couchbase, Huawei, Novell, EMC, and Veritas. He holds 11 patents in database systems and distributed computing, and his thesis has contributed foundational works of Parametric Query Optimization. He holds Master’s degree in Computer Science from IIT, Kanpur.

Vuk Ercegovac is a principal engineer for Redshift at AWS.

A public data lake for analysis of COVID-19 data

As the COVID-19 pandemic continues to threaten and take lives around the world, we must work together across organizations and scientific disciplines to fight this disease. Innumerable healthcare workers, medical researchers, scientists, and public health Read more…

Simplify your Spark dependency management with Docker in EMR 6.0.0

Apache Spark is a powerful data processing engine that gives data analyst and engineering teams easy to use APIs and tools to analyze their data, but it can be challenging for teams to manage their Read more…

Since Amazon Redshift launched in 2012, its focus has always been on providing you with the best possible performance, at scale, and at the lowest possible cost. For most organizations across the globe, the amount Read more…