In a hierarchical database model, information is stored in a tree-like structure or parent-child structure, where each record can have a single parent but many children. Hierarchical databases are useful when you need to represent data in a tree-like hierarchy. The perfect example of a hierarchical data model is the navigation file and folders or sitemap of a website. Another common example that’s widely used is a company organization chart or staffing information where employees are linked with each other via employee-manager relationship.

In this post, we present a simple hierarchical data model and write queries to show how easy it is to retrieve information from this model using recursive CTEs in Amazon Redshift.

Amazon Redshift provides the WITH statement, which allows us to construct auxiliary statements (CTEs) for use in a SQL query. CTEs are like temporary tables that exist only while running the query.

ANSII CTEs is a great technique to simplify complex queries by breaking the query into simple individual pieces. Using CTEs with a WITH clause results in a more readable and maintainable query versus using subqueries. The following is a simple query to illustrate how to write a CTE:

In the preceding query, the outer_products block is constructed using a WITH clause. You can use this block within subqueries, join conditions, or any other SQL constructs, just like any table. Without this block, complex queries involve code replication multiple times, which increases complexity and readability.

The following is an example of a recursive CTE to generate a sequence of numbers. The recursive part nums is being used in the inner query that references the outer CTE, which is defined as RECURSIVE nums(n).

Let’s look at an organization chart where employees are related to each other in a staffing data model. 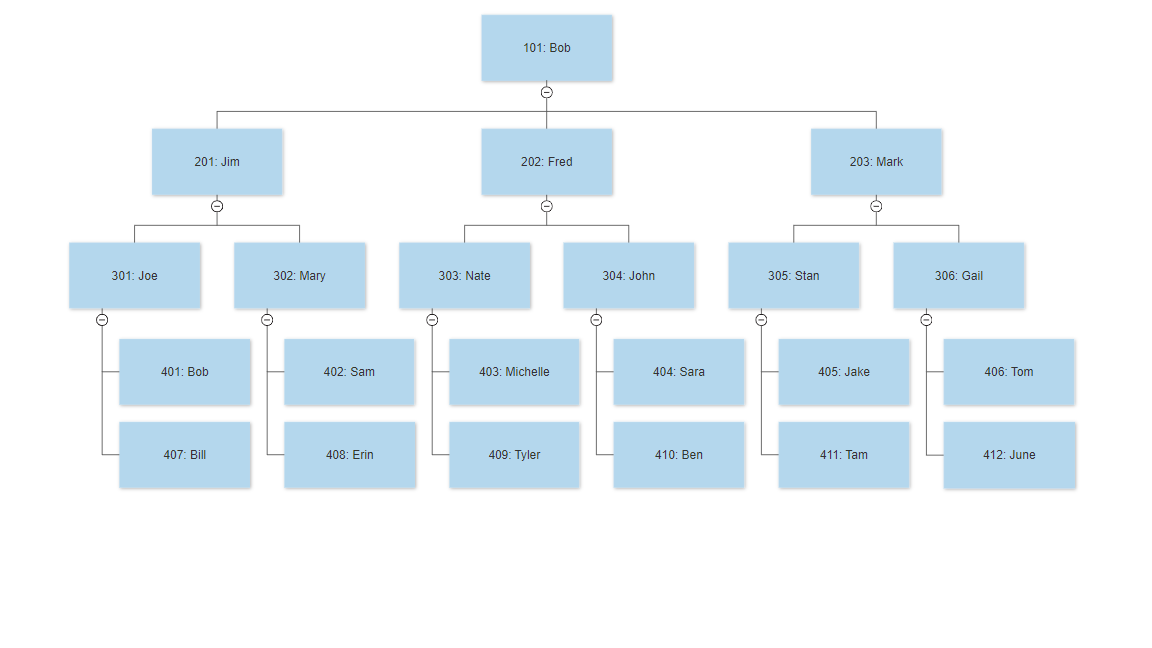 The following queries run on a table called employees, which contains the employee ID, employee name, and manager of the employee.

Let’s look at how to return the number of employees that directly or indirectly report to Bob.

Let’s break down the preceding query and look at individual pieces that construct the components of a hierarchal query.

In general, a recursive CTE is a UNION ALL subquery with three parts within the WITH clause:

Let’s use the same org chart to get all the subordinates of the manager with ID 302:

The first SELECT query (the anchor member) returns the base result, which is the employee with ID 302:

Next, the recursive member returns all the members underneath the tree rooted at employee ID 302 as well as the root, which is ID 302:

When we start at the seed level, recursive queries can traverse a hierarchical tree in an elegant manner. This is not easily possible without hierarchical support, which is achieved by recursive CTEs.

Displaying hierarchy levels and a hierarchical path along with the data is also often desired in these types of use cases. You can easily achieve this by using a recursive CTE with the following approach.

Let’s modify the preceding query to display the hierarchical path and levels:

The result of the preceding query is as follows:

Because both employees 402 and 408 are one level below Mary (302), their level is 1 plus Mary’s level. Also, it should be noted that the path column now indicates the hierarchical path rooted at the seed level, which was 302 in our scenario.

You can use both top-down and bottom-up approaches via recursive CTE to traverse the hierarchical structure. In the preceding example, we presented a top-down approach. To traverse bottom-up, you should specify the starting point in the first part of the query. Then the second query needs to join the recursive component using the parent ID.

In both top-down and bottom-up strategies, you must clearly specify the termination condition. You might run into cyclic conditions, which could cause buffer overflow if termination conditions aren’t specified correctly. This could cause an infinite loop, causing Recursive CTE out of working buffers errors in Amazon Redshift. Therefore, you must add a condition to stop the recursion, which prevents infinite loops.

Nadim Rana is a Data Warehouse and MPP Architect at Amazon Web Services. He is a big data enthusiast and collaborates with customers around the globe to achieve success and meet their data warehousing and data lake architecture needs.