In a previous post, we introduced the Amazon EMR notebook APIs, which allow you to programmatically run a notebook on both Amazon EMR Notebooks and Amazon EMR Studio (preview) without accessing the AWS web console. With the APIs, you can schedule running EMR notebooks with cron scripts, chain multiple EMR notebooks, and use orchestration services such as AWS Step Functions triggered by AWS CloudWatch Events.

In this post, we show how to use Amazon Managed Workflows for Apache Airflow (Amazon MWAA) to orchestrate analytics jobs on EMR Notebooks. We will start by walking you through the process of using AWS CloudFormation to set up an Amazon MWAA environment, which allows you to programmatically author, schedule, and monitor different sorts of workflows on Amazon EMR. We will then use this environment to run an EMR notebook example which does data analysis with Hive.

The data source for the example in this post is from the public Amazon Customer Reviews Dataset. We use the Parquet formatted dataset as the input dataset for our EMR notebook.

Apache Airflow is an open-source platform for authoring, scheduling, and monitoring workflows. With Apache Airflow, we can define direct acyclic graphs (DAGs). DAGs describe how to run a workflow and are written in Python. For additional details on Apache Airflow, see Concepts. Many organizations build, manage, and maintain Apache Airflow on AWS using services such as Amazon Elastic Compute Cloud (Amazon EC2) or Amazon Elastic Kubernetes Service (Amazon EKS). Amazon MWAA is a fully managed service that makes it easy to run open-source versions of Apache Airflow on AWS, and to build workflows to run your extract, transform, and load (ETL) jobs and data pipelines.

Before getting started, you must have the following prerequisites:

At a high level, this solution uses Amazon MWAA with Amazon EMR to build pipelines for ETL workflow orchestration. The following diagram illustrates the solution architecture. 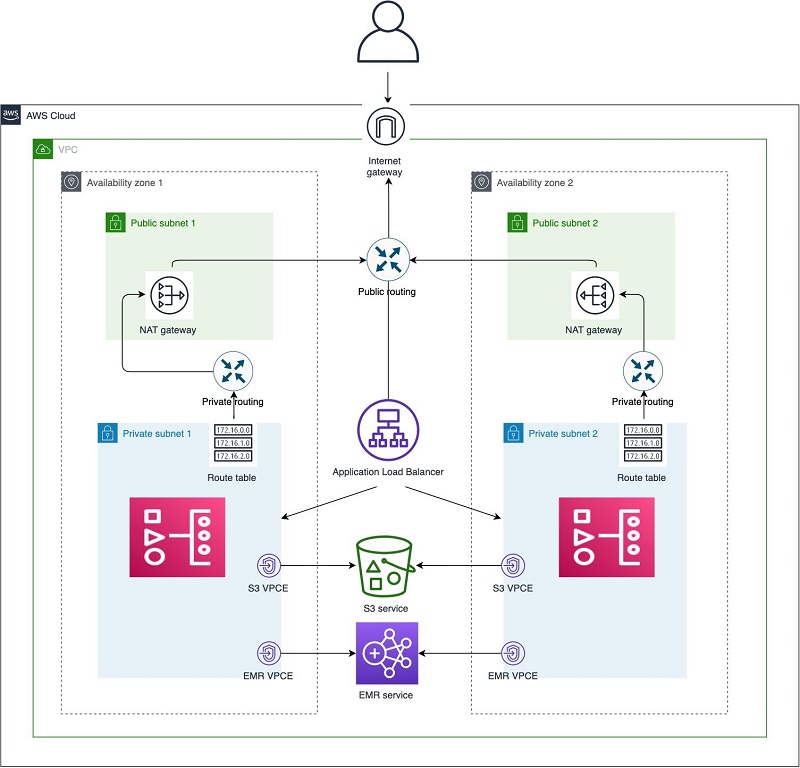 We use the following services and configurations in this solution:

The Airflow UI in the Amazon MWAA environment is accessible over the internet by users granted access in the IAM policy. Amazon MWAA attaches an Application Load Balancer with an HTTPS endpoint for your web server as part of the Amazon MWAA managed service. For more information, see How it works.

Setting up an Amazon MWAA environment

To make it easier to get started, we created a CloudFormation template that automatically configures and deploys the Amazon MWAA environment. The template takes care of the following tasks for you:

If you want to manually create, configure, and deploy the Amazon MWAA environment without using AWS CloudFormation, see Get started with Amazon Managed Workflows for Apache Airflow (MWAA).

To launch your stack and provision your resources, complete the following steps:

This automatically launches AWS CloudFormation in your AWS account with a template. It prompts you to sign in as needed. You can view the template on the AWS CloudFormation console as required. The Amazon MWAA environment is created in the same Region as you launched the CloudFormation stack. Make sure that you create the stack in your intended Region.

The CloudFormation stack requires a few parameters, as shown in the following screenshot. 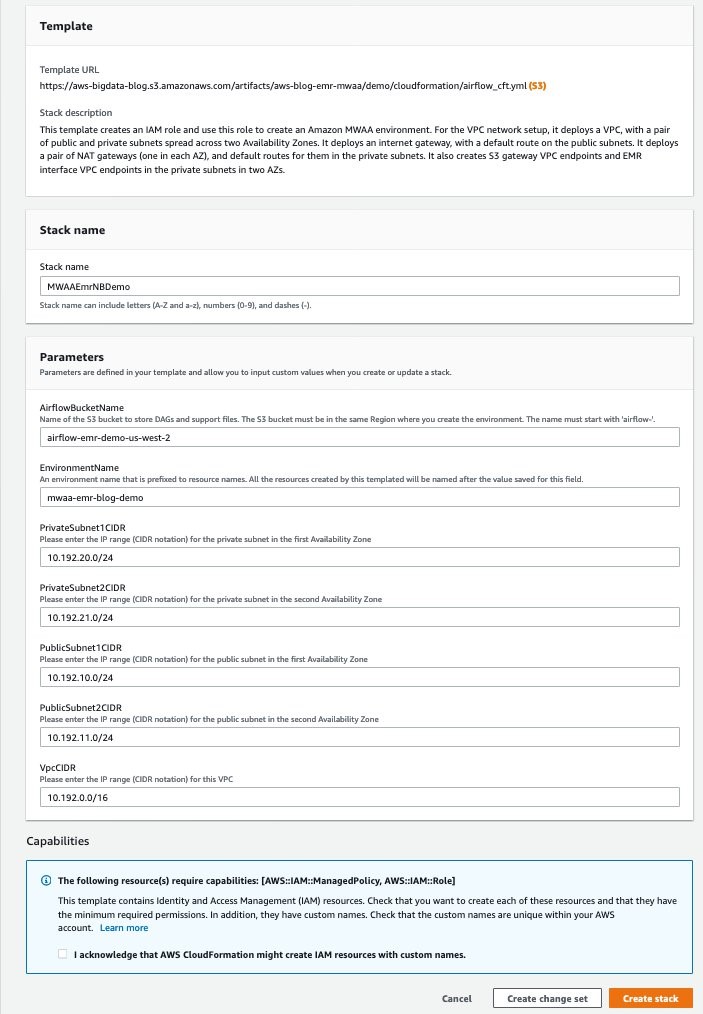 The following table describes the parameters.

The default values for the IP range (CIDR notation) fields refer to the AWS CloudFormation VPC stack specifications. You can make changes based on the requirements of your own network settings.

The following diagram illustrates the workflow: As a user, you first need to create the DAG file that describes how to run the analytics jobs and upload it to the dags folder under the S3 bucket specified. The DAG can be triggered in Apache Airflow UI to orchestrate the job workflow, which includes creating an EMR cluster, waiting for the cluster to be ready, running Hive analytics jobs on EMR notebooks, uploading the results to Amazon S3, and cleaning up the cluster after the job is complete. 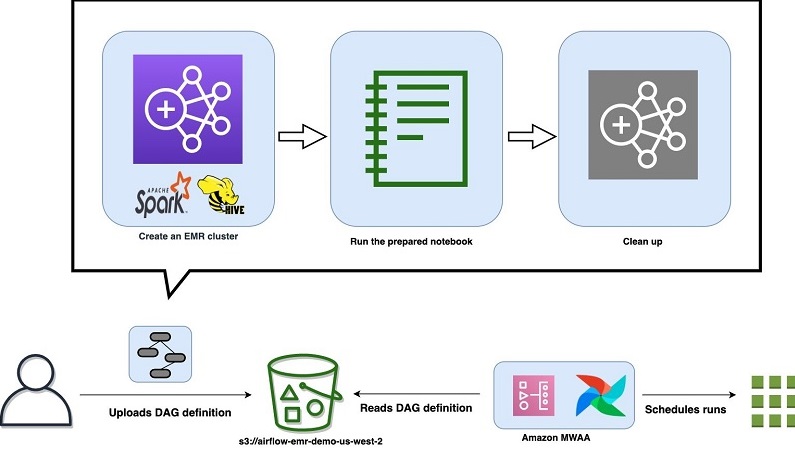 Let’s take a look at the following input notebook file find_best_sellers.ipynb, which we use for our example. 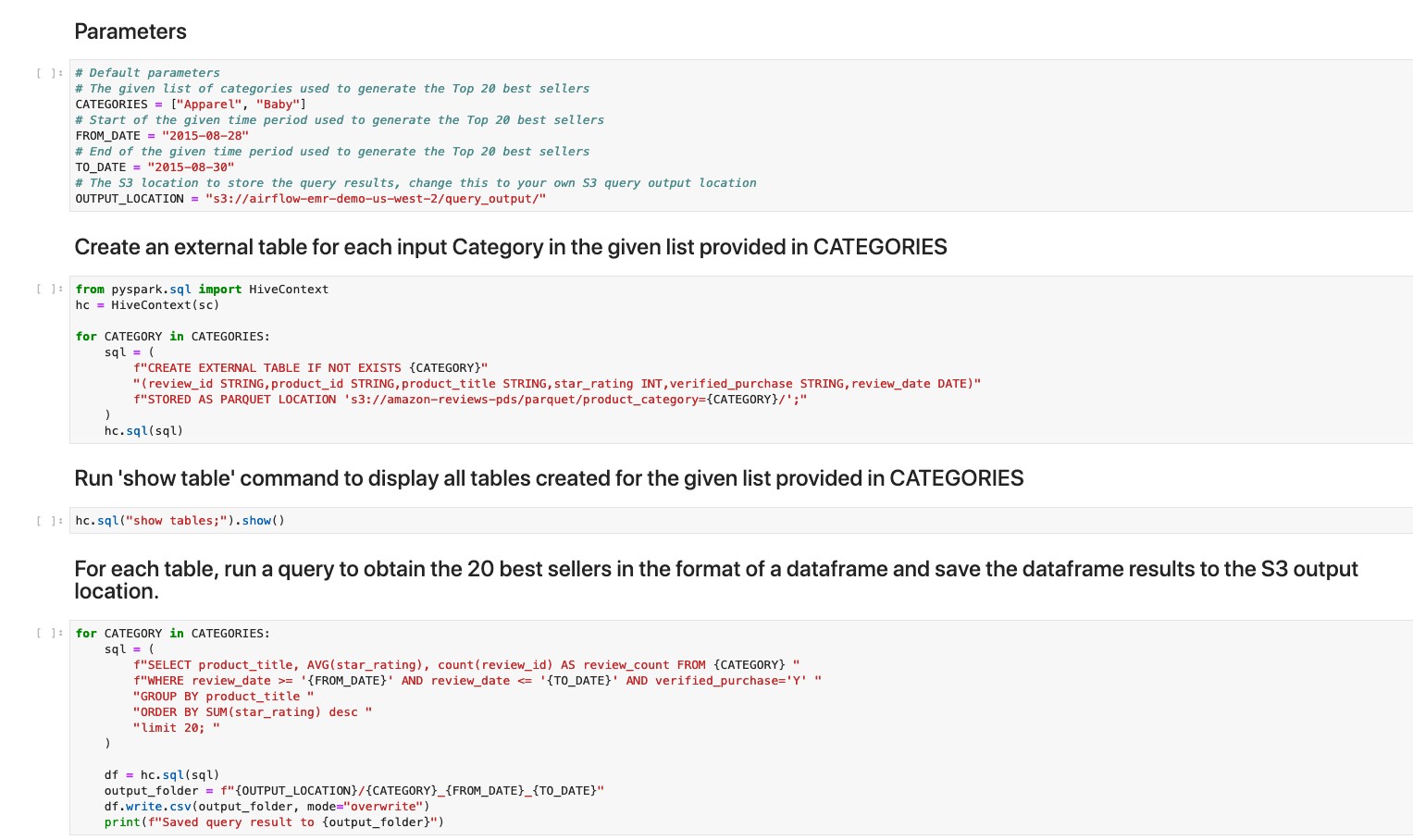 find_best_sellers.ipynb is a Python script that does analysis on the public Amazon Customer Reviews Dataset. It generates the top 20 best sellers in a given list of categories over a given period of time and saves the results to the given S3 output location. For demonstration purpose only, we rank the seller simply by the sum of review star ratings from verified purchases.

The explanations of the default parameters in the first cell and each code block are included in the notebook itself.

The last line in the first cell, we have OUTPUT_LOCATION = "s3://airflow-emr-demo-us-west-2/query_output/” as a default value for the input parameter. Replace it with your own value for the output location. You can also supply a different value for this for this parameter in the Airflow Variables later.

The DAG file test_dag.py is used to orchestrate our job flow via Apache Airflow. It performs the following tasks:

Here is the full source code of the DAG:

The very last line of the DAG code explains how the tasks are linked in the orchestration workflow. It’s overloading the right shift >> operator to create a dependency, meaning that the task on the left should be run first, and the output passed to the task on the right.

We create a JSON formatted file named variables.json for our example. See the following code:

To use this JSON code, you need to replace all the variable values (subnet and S3 paths) with the actual values.

To run the workflow, complete the following steps: 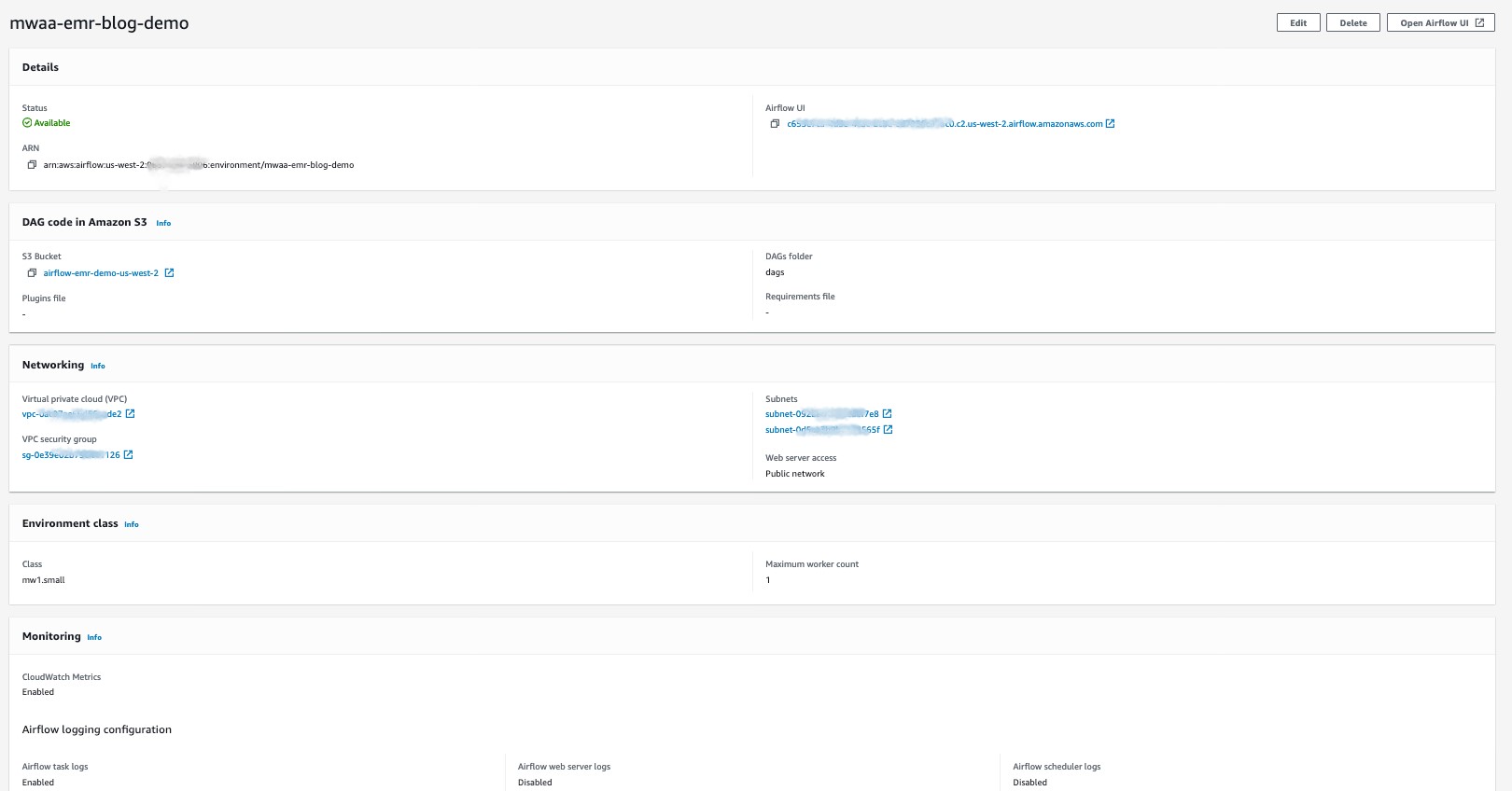 Next, we import the JSON file for the variables into Airflow UI.

As we mentioned earlier, we want to supply the variable values for our DAG definition later upon triggering the DAG in Airflow UI instead of hard-coding the values. 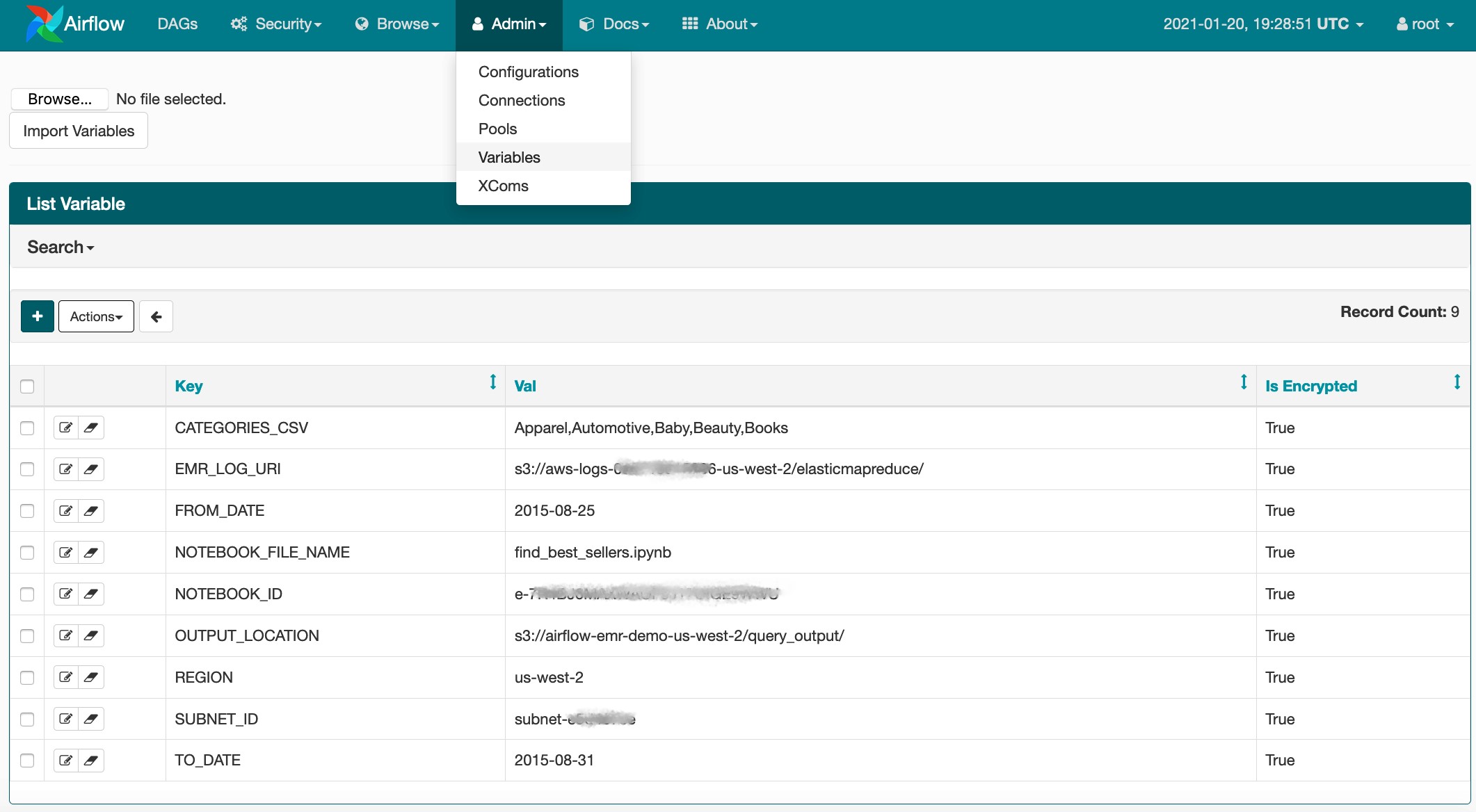 test_dag.py should automatically appear in the Airflow UI.

On the Graph View tab, we can see the whole workflow of our pipeline and each individual task as defined in our DAG code.

You now get an email when failure happens on any of the tasks. You can also configure to get email notification when retry happens as well. 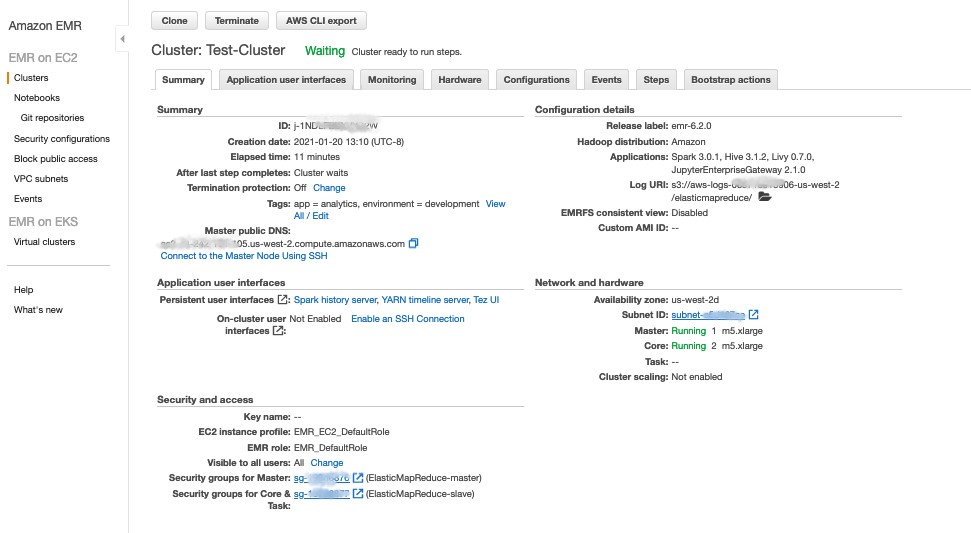 After a few minutes, we can see on the Tree View tab that the workflow is complete and all the tasks are successful.

On the Gantt tab, we can see the time distribution of all the tasks of our workflow.

As specified in our DAG definition, the EMR cluster is stopped when the workflow is complete.

Because we use the cron expression 0 * * * * as the scheduled running interval for our workflow, if the triggered status of the DAG is ON, it runs every hour. You need to switch the status to OFF if you don’t want it to run again. 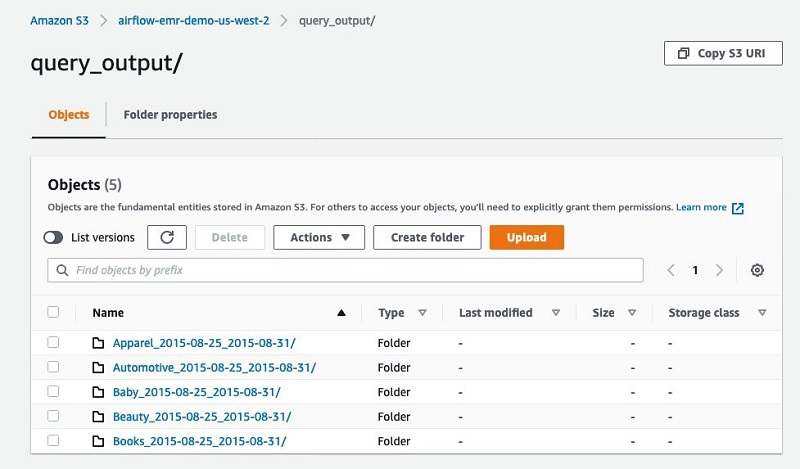 For example, the following screenshot is the output for the Books category that we provided as a value in the CATEGORIES parameter. As we can see, Go Set a Watchman: A Novel is the best Books seller from the week of 8-25-2015 to 8-31-2015. 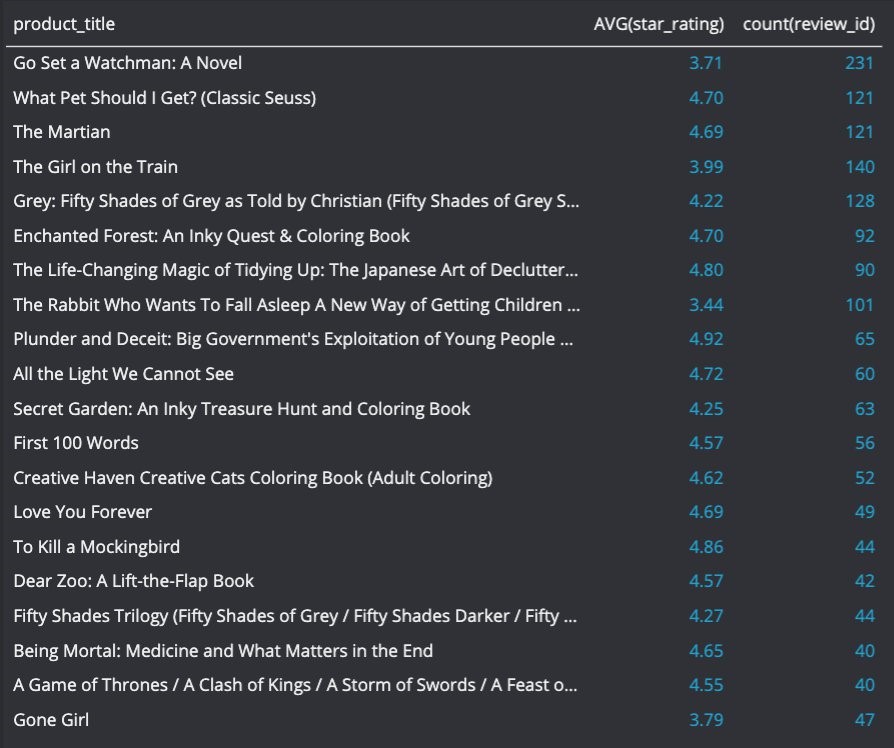 To avoid ongoing charges, delete the CloudFormation stack and any files in Amazon S3 that were created by running the examples in this post.

This post showed how to use the Amazon EMR Notebooks API and use orchestration services such as Amazon MWAA to build ETL pipelines. It demonstrated how set up a secured Amazon MWAA environment using a CloudFormation template and run a sample workflow with Apache Airflow.

If you want to learn how to run Amazon EMR applications such as PySpark with Amazon MWAA, see Running Spark Jobs on Amazon EMR with Apache Airflow.

Fei Lang is a senior big data architect at Amazon Web Services. She is passionate about building the right big data solution for customers. In her spare time, she enjoys the scenery of the Pacific Northwest, going for a swim, and spending time with her family.

Ray Liu is a software development engineer at AWS. Besides work, he enjoys traveling and spending time with family.

This is a guest post by Ori Nakar, Principal Engineer at Imperva. In their own words, “Imperva is a large cyber security company and an AWS Partner Network (APN) Advanced Technology Partner, who protects web Read more…

Many customers are gathering large amount of data, generated from different sources such as IoT devices, clickstream events from websites, and more. To efficiently extract insights from the data, you have to perform various transformations Read more…