Automating your software build is an important step to adopt DevOps best practices. To help you with that, we built AWS CodeBuild, a fully managed continuous integration service that compiles source code, runs tests, and produces packages that are ready for deployment, and AWS CodePipeline, a fully managed continuous delivery service to automate your release pipelines.

However, there are so many possible customizations in our customers’ build processes, and we have seen developers spend time in creating their own custom workflows to coordinate the different activities required by their software build. For example, you may want to run, or not, some tests, or skip static analysis of your code when you need to deploy a quick fix. Depending on the results of your unit tests, you may want to take different actions, or be notified via SNS.

To simplify complex use cases that cannot be easily implemented with CodePipeline, we are launching today a new AWS Step Functions service integration with CodeBuild. Now, during the execution of a state machine, you can start or stop a build, get build report summaries, and delete past build executions records.

In this way, you can define your own workflow-driven build process, and trigger it manually or automatically. For example you can:

With this integration, you can use the full capabilities of Step Functions to automate your software builds. For example, you can use a Parallel state to create parallel builds for independent components of the build. Starting from a list of all the branches in your code repository, you can use a Map state to run a set of steps (automating build, unit tests, and integration tests) for each branch. You can also leverage in the same workflow other Step Functions service integrations. For instance, you can send a message to an SQS queue to track your activities, or start a containerized application you just built using Amazon ECS and AWS Fargate.

Using Step Functions for a Workflow-Driven Build Process
I am working on a Java web application. To be sure that it works as I add new features, I wrote a few tests using JUnit Jupiter. I want those tests to be run just after the build process, but not always because tests can slow down some quick iterations. When I run tests, I want to store and view the reports of my tests using CodeBuild. At the end, I want to be notified in an SNS topic if the tests run, and if they were successful.

I created a repository in CodeCommit and I included two buildspec files for CodeBuild:

To set up the CodeBuild project and the Step Functions state machine to automate the build, I am using AWS CloudFormation with the following template:

When the CloudFormation stack has been created, there are two CodeBuild tasks in the state machine definition:

The first step is a Choice that looks into the input of the state machine execution to decide if to run tests, or not. For example, to run tests I can give in input:

This is the visual workflow of the execution running tests, all tests are passed. 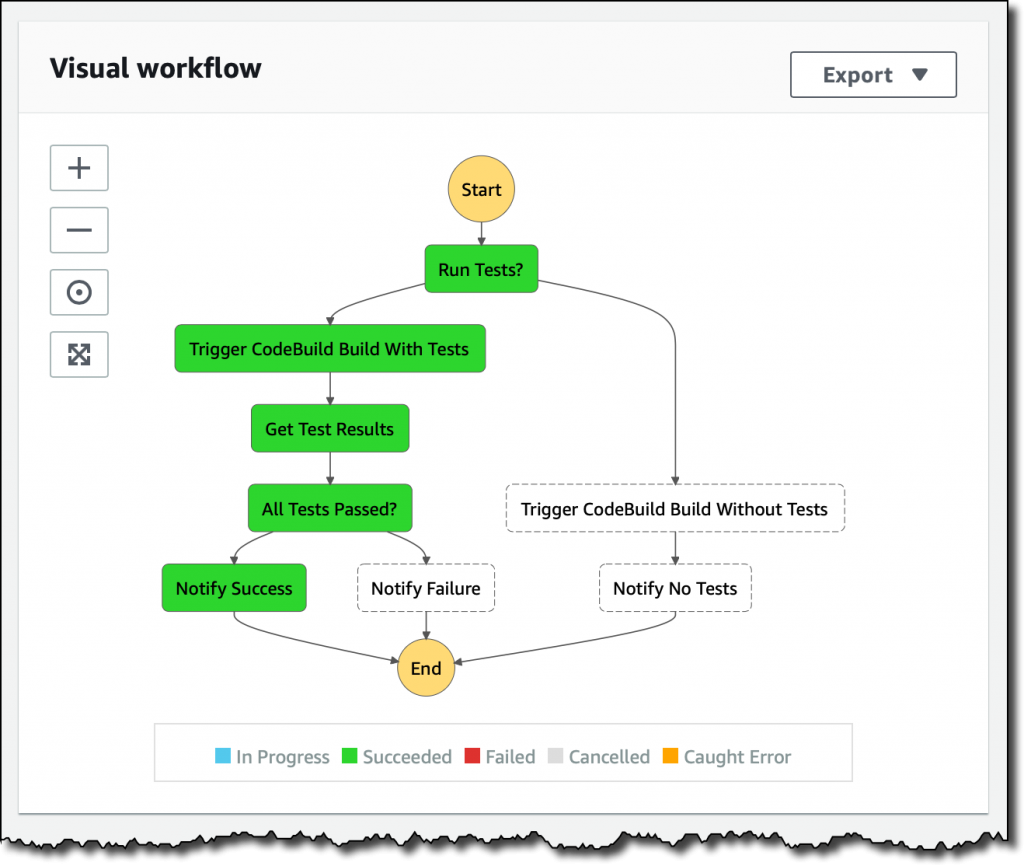 I change the value of "tests" to false, and start a new execution that goes on a different branch. 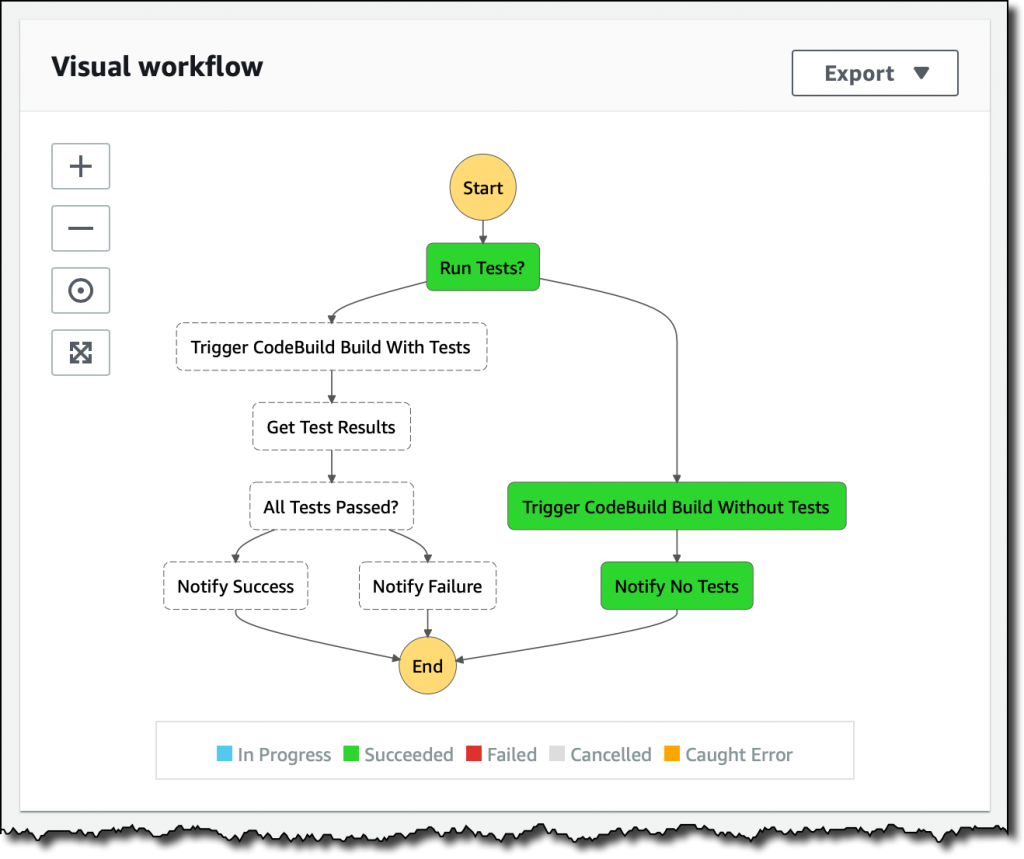 This time the buildspec is not executing tests, and I get a notification that no tests were run.

When starting this workflow automatically after an activity on GitHub or CodeCommit, I could look into the last commit message for specific patterns, and customize the build process accordingly. For example, I could skip tests if the  [skip tests] string is part of the commit message. Similarly, in a production environment I could skip code static analysis, to have faster integration for urgent changes, if the [skip static analysis] message in included in the commit.

Extending the Workflow for Containerized Applications
A great way to distribute applications to different environments, is to package them as Docker images. In this way, I can also add a step to my build workflow and start the containerized application in an Amazon ECS task (running on AWS Fargate) for the Quality Assurance (QA) team.

First, I create an image repository in ECR and add permissions to the service role used by the CodeBuild project to upload to ECR, as described here.

Then, in the code repository, I follow this example to add:

The final workflow is automating all these steps:

The workflow and its steps can easily be customized based on your requirements. For example, with a few changes, you can adapt the buildspec file to push the image to Docker Hub.

Available Now
The CodeBuild service integration is available in all commercial and GovCloud regions where Step Functions and CodeBuild services are offered. For regional availability, please see the AWS Region Table. For more information, please look at the documentation.

As AWS Serverless Hero Gojko Adzic pointed out on the AWS DevOps Blog, CodeBuild can also be used to execute administrative tasks. The integration with Step Functions opens a whole set of new possibilities.

Let me know what are you going to use this new service integration for!

You can now use AWS Lake Formation in the Europe (Milan) region.