Field Notes: Implementing a Digital Shadow of a Connected Vehicle with AWS IoT

Innovations in connected vehicle technology are expected to improve the quality and speed of vehicle communications and create a safer driving experience. As connected vehicles are becoming part of the mainstream, OEMs (Original Equipment Manufacturers) are broadening the capabilities of their products and dramatically improving the in-vehicle experience for customers.

An important feature in a connected vehicle is its ability to execute a remote command and synchronize the state of the vehicle between a web/mobile app in real time.

This blog demonstrates how to:

You can watch a quick animation of a remote command execution in the following GIF:

In a traditional connected vehicle approach, there are many processes running on multiple servers. These processes are subscribing to one another, coordinating with each other, and polling for an update. This makes scalability and availability a challenge. We use AWS IoT Core and AWS IoT Device Shadow service as primary components for this solution.

This solution has three building blocks:

The previous diagram shows a message flowing in the following example:

Note: For the Web/Mobile app developments for production, it is recommended to use AWS AppSync and AWS Amplify SDK for building a flexible and decoupled application from the API. Refer to this code sample for more detail.

First, you need to set up the code. Refer to the directions in this code sample. 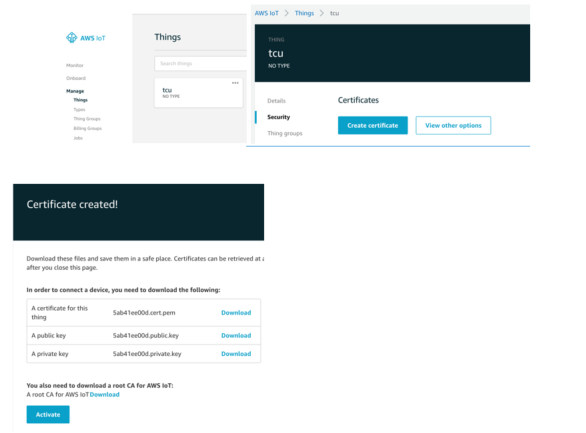 Next, deploy the certificate key and pem file on your device so it can connect with the AWS Cloud using the X.509 certificate. For more detail, refer to the directions in the code sample.

AWS IoT Device Shadow is an important feature of AWS IoT core for remote command execution because it allows you to decouple the vehicle and the app which controls and commands the vehicle. A device’s shadow is a JSON document that is used to store and retrieve current state information for a device. Primarily we use state.desired and state.reported. properties of a device’s shadow document.

The device shadow (Device SKD and APIs) enables applications to interact with devices even when they are offline and allow:

The rich features of a device shadow allows the app to interact with the vehicle TCU even when there is no connectivity. Once connectivity is established, the device gateway pushes the changes to device and vice versa.

We need to deploy a program (tcuShadowWrite.py) on the vehicle TCU device to update the device shadow and send the update to the AWS Cloud. This program is available in this code repository.

Let’s assume that after reaching their home, the vehicle’s user closes the door, switches off the headlights, and rolls up the windows. The same state of the vehicle should be reflected on their web/mobile app in real time. The vehicle TCU has to update the “reported” state in the device shadow JSON document.

AWSIoTMQTTShadowClient library has a method called shadowUpdate that needs to be called from the vehicle TCU to update the device shadow. Essentially, it is publishing the shadow reported state on topic $aws/things/<thingName>/shadow/update.

If you run tcuShadowWrite.py script, you should be able to see the output as described in the following image. 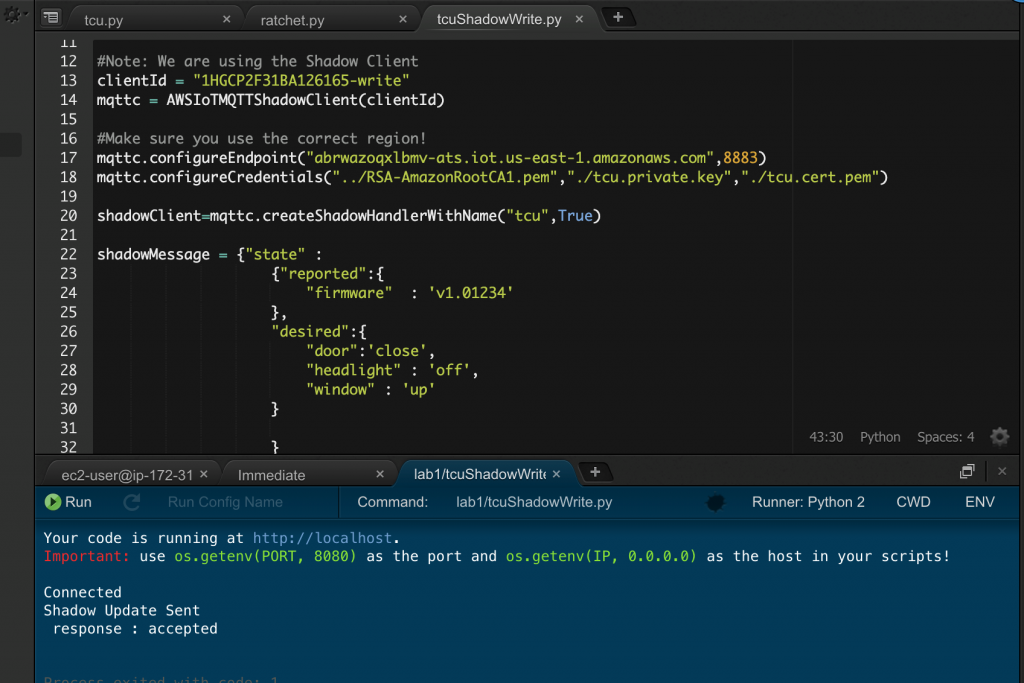 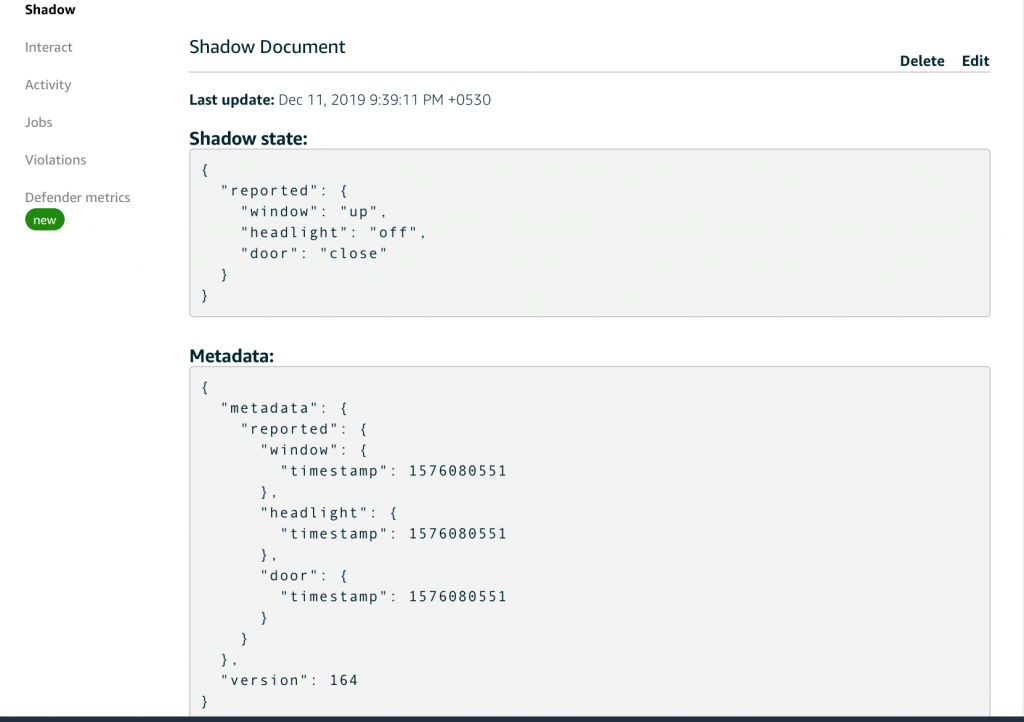 We need to deploy a program (tcuShadowRead.py) on the vehicle TCU to receive updates from the AWS Cloud. It is available in this code sample.

Let’s assume the vehicle owner uses the mobile app to open the door, switch on the headlight and roll down the windows. The vehicle TCU should receive this command and instruct the Electronic Control Unit (ECU) to execute the command. The web/mobile app will update the “desire” state in the device shadow JSON document.

In tcuShadowRead.py, AWSIoTMQTTShadowClient has a method shadowRegisterDeltaCallback. It listens on delta topics for this device shadow by subscribing to delta topics. Whenever there is a difference between the desired and reported state, the registered callback is called and the delta payload will be available in the callback.

The callback function has a code to handle the state change request. In an actual implementation, a function like door_handle() would be calling the ECU to execute the door open command.

If you make changes in Device Shadow on AWS IoT for the tcu device, you should receive the output in the following image. 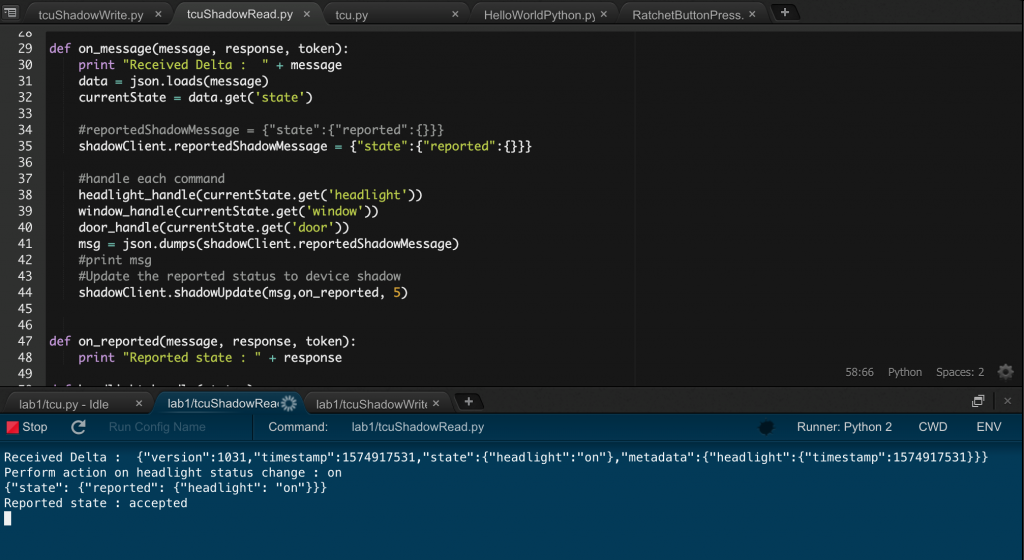 Test with a Virtual Vehicle Model 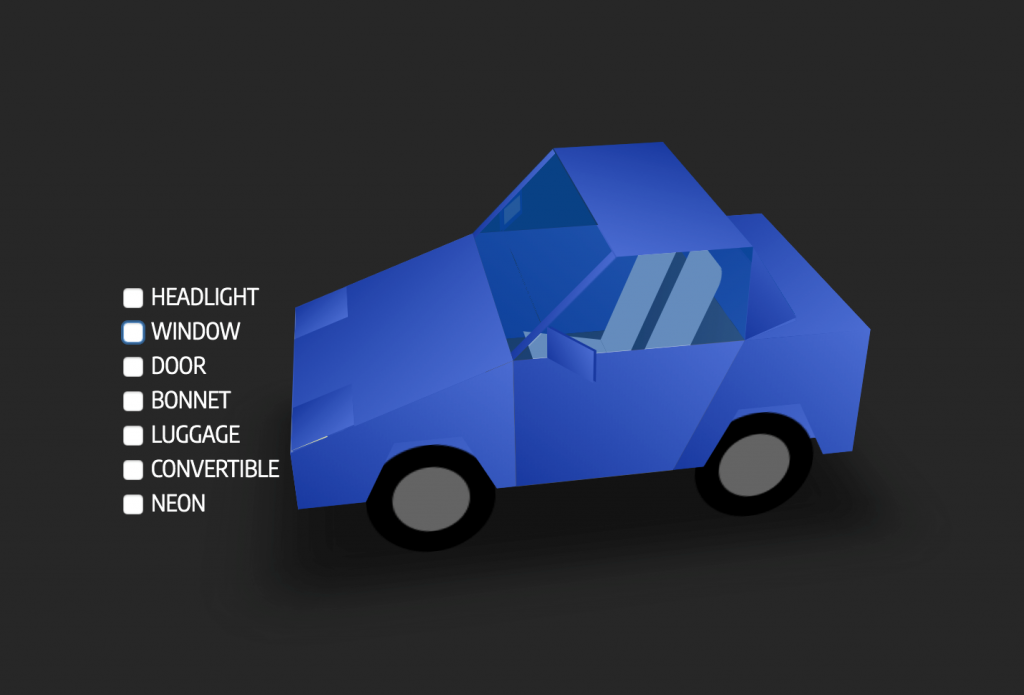 Any changes in the model state should be reflected on the virtual demo vehicle and vice versa.

Here, we use open-source Paho-mqtt library.  and Developers can use this to write JavaScript applications that access AWS IoT using MQTT or MQTT over the WebSocket protocol without using AWS IoT SDK. This implementation is made simpler by using AWS IoT Device SDK for JavaScript v2 Readme.

We have another JavaScript file demo-car.js in the demo-car folder. This includes the functions that our simulated vehicle will use in order to change the device shadow. 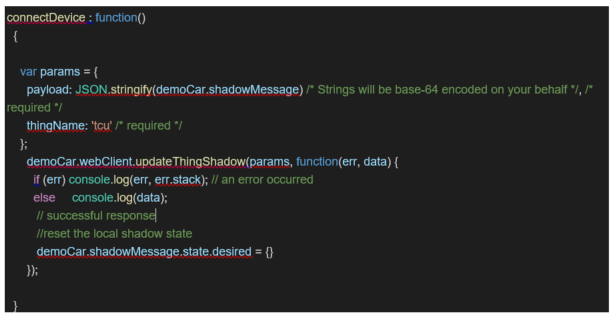 In this blog, we showed how to implement a digital shadow of a connected vehicle using AWS IoT. This solution removes complexity from running multiple processes in parallel and ensures a successful outcome. AWS IoT Core enables scalable, secure, low-latency, low-overhead, bi-directional communication between connected devices, tolerate and recover from slow/brittle connection, the AWS Cloud and customer-facing applications.

The Device Shadow in AWS IoT Core enables the AWS Cloud and applications to easily and accurately receive data from connected vehicles and send commands to the vehicles. The Device Shadow’s uniform and always-available interface simplifies the implementation of time-sensitive use cases. These include, remote command execution and two-way state synchronization between a device and app where the cloud is acting as a broker. This solution enables you to shift operational responsibilities of a connected vehicle infrastructure to the AWS Cloud while paying only for what you use, with no minimum fees or mandatory service usage.

For more information about how AWS can help you build connected vehicle solutions, refer to the AWS Connected Vehicle solution page.

AWS customers from startups to enterprises have been successfully running Kubernetes clusters on Amazon EC2 instances since 2015, well before Amazon Elastic Kubernetes Service (Amazon EKS), was launched in 2018. As a fully managed Kubernetes Read more…

Unlocking Data from Existing Systems with a Serverless API Facade

In today’s modern world, it’s not enough to produce a good product; it’s critical that your products and services are well integrated into the surrounding business ecosystem. Companies lose market share when valuable data about Read more…

Customers developing self-driving car technology are continuously challenged by the amount of data captured and created during the development lifecycle. This is accelerated by the need to design and launch incremental feature improvements on advanced Read more…