Amazon Web Services (AWS) has added a new feature to Amazon Virtual Private Cloud (Amazon VPC) called traffic mirroring. You can think of Amazon VPC traffic mirroring as a virtual network tap that gives you direct access to the network packets flowing through your Amazon VPC.

Customers rely on network tapping and mirroring functions for testing, troubleshooting, network analysis, security, and compliance requirements, to name a few. They are already taking advantage of this new cloud-native network tapping solution, which offers network and security capabilities that are common place in the data center.

Customers who have made the move to AWS enjoy an overwhelming amount of benefits, but also face the challenge of gaining visibility into the network traffic flowing over their Amazon VPC.

Customers would use Amazon VPC flows to see network flows, but they were missing the application-level context of the packet. This left many security teams with a challenge to build complex monitoring solutions that came with undifferentiated heavy lifting.

Now that Amazon VPC traffic mirroring is available, customers can satisfy the needs of their security teams’ requirements and gain visibility into their network.

In this post, we will explore how Nubeva Technologies, an AWS Partner Network (APN) Advanced Technology Partner, built a solution that directly integrates with Amazon VPC traffic mirroring to provide an out-of-band decryption solution for AWS customers.

This joint solution with Nubeva’s product and Amazon VPC traffic mirroring gives customers a surgical approach to capture and analyze network traffic on the AWS Cloud.

What is Amazon VPC Traffic Mirroring?

You can use VPC traffic mirroring in a multi-account AWS environment, capturing traffic from Amazon VPCs spread across many AWS accounts, and then routing it to monitoring instances, using Amazon VPC peering or AWS Transit Gateway, in a central Amazon VPC for inspection.

A traffic mirroring session can be created and orchestrated using the AWS Software Developer Kit (SDK) or AWS Command Line Interface (CLI). As you create new workloads, enabling Amazon VPC traffic mirroring at the time of launch is just a few additional commands to your build scripts. You can check out those steps here.

What Customers Did Before Amazon VPC Traffic Mirroring

A challenge for network and security monitoring in any environment is traffic gathering and acquisition. In the on-premises world, a number of methods were created to solve this issue, such as SPAN (Switched Port Analyzer) sessions on physical network switches, or putting inline hardware on physical network connections to gain visibility into the traffic flowing over the network.

As your environment continues to grow on AWS, it becomes critical to keep an ever-watchful eye out for unusual traffic patterns or content that could signify a network intrusion, a compromised instance, or some other anomaly.

Solutions for network traffic monitoring on AWS have historically been limited to anything that can be installed on an Amazon EC2 instance, usually in the form of a software agent, or is extracted from Amazon VPC flow logs. This has impacted the adoption of packet-level monitoring in the cloud due to the cost and complexity of traditional solutions, specifically the need to deploy multiple host-based agents as an example.

Then, you can direct all of this mirrored traffic, or filter based on components like the protocol, source/destination IP address and port, to various tools, such as the open source options Zeek, Suricata, and Moloch, to name a few, or any other monitoring solution. That’s it. No need for expensive tooling or middleware.

Keeping traffic mirroring costs low is critical when companies begin to look at comprehensive monitoring solutions, such as cases where forensic analysis is required. In the case of incident response, there are many facets to it.

Let’s look at a few different techniques you can execute when using Amazon VPC traffic mirroring in practice.

This is the traditional “something happened” button. A company’s security team identifies a potential threat inside their environment, and they start their incident response procedures. Immediately, Amazon VPC traffic mirroring can be enabled on the Amazon EC2 instances in the identified Amazon VPCs. Traffic is then sent, in real-time, to your security tools in your AWS environment.

Further automation can be achieved here to enable traffic mirroring on the fly for Amazon EC2 instances that meet certain threat remediation criteria defined by your organization. Like everything on AWS, it’s simply an API away to enable Amazon VPC traffic mirroring.

This is similar to the option above, except the monitoring is in a constant state. This means you’ll be capturing all in-bound and out-bound communication on an Amazon EC2 instance for the duration of its uptime. Constant capture is what most security organizations do on-premises today, but it has not been possible to easily replicate this in the cloud until now.

You can store packet captures in Amazon Simple Storage Service (Amazon S3) using monitoring tools for long-term archival and ready to analyze when needed. Amazon VPC traffic mirroring allows you to instrument everything and have a forensic record of your network traffic.

The on-demand use case is often too late for many organizations, while the constant approach is often too much. Because of this, many AWS customers choose sampling as a unique and effective approach to monitoring. The automation and orchestration capabilities of Amazon VPC traffic mirroring allows you to monitor one or many groups of Amazon VPC resources for short amounts of time and then shift to another set of resources.

If any of these monitored groups show any irregularities, they can be tagged and immediately set to be monitored by another set of tools for further analysis, while the packet captures continue to sample traffic from the workloads, looking for threats and anomalies.

Nubeva’s TLS Decrypt is a new, out-of-band solution that decrypts SSL/TLS traffic, enabling security and application teams to inspect and monitor their data in motion.

More than 70 percent of all network traffic is currently encrypted. Enterprises need to monitor their applications across Amazon VPCs for both security, compliance, application performance and diagnostics reasons. 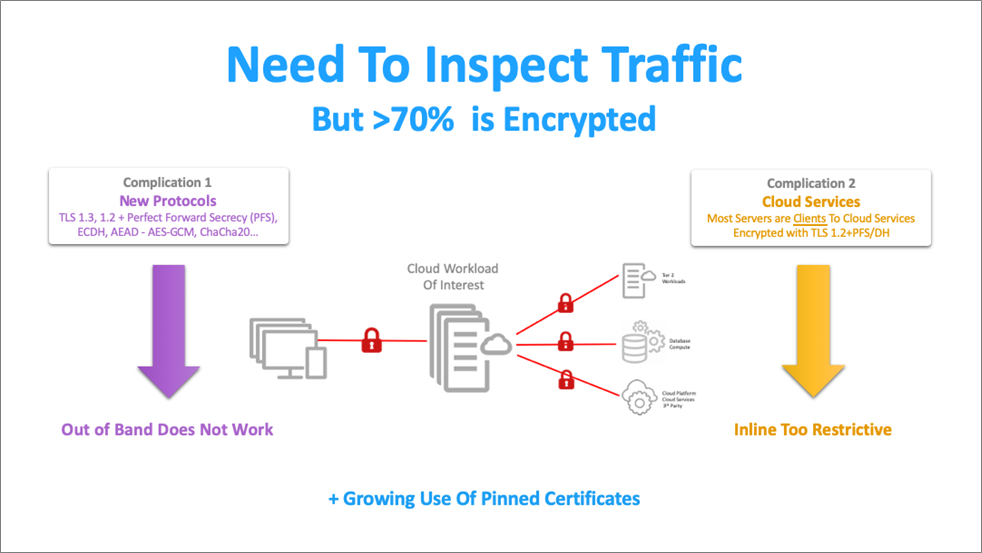 While modern encryption protocols provide the highest levels of security, they also limit visibility due to the packet’s encryption. Nubeva integrates with Amazon VPC traffic mirroring to enable decryption and visibility for mirrored encrypted packets.

For one Fortune 500 financial services company, the implication of this capability is significant. This finally unlocks one of the more problematic issues for their security team. One of their top five projects for 2019 was sending decrypted/unencrypted packets to open source tools in the cloud.

In their on-premises data centers, the SOC would decrypt all traffic to their web and app tiers using standard MITM approaches. With the shift to the cloud and the change to TLS 1.2 PFS and TLS 1.3, the MITM approaches simply were not feasible.

With Nubeva’s innovative decryption capabilities, this customer project has new life. It’s now possible to decrypt traffic that no MITM solution could ever hope to decrypt.

Nubeva’s seamless decryption allows customers to send Amazon VPC traffic mirroring data to their centralized Amazon VPC for infosec tooling, which could contain Zeek or Moloch, for example, as well as any other solutions. All of these tools then leverage the key database to search for the applicable keys and unlock visibility for all their tools.

For customers that need the ability to execute even deeper inspection of Amazon VPC network traffic, Nubeva’s TLS decryption works great with Amazon VPC traffic mirroring to decrypt mirrored traffic on the destination for deeper analysis.

Together, this combined elegant solution enables customers to adopt aggressive encryption in their environment, while also enabling IT teams to have the right level of visibility into their cloud network traffic.

For more details on how to use Nubeva Decrypt with Amazon VPC traffic mirroring, check out the overview video. If you’re interested in trying out the Nubeva product, please visit nubeva.com/aws >>

Nubeva is an APN Advanced Technology Partner that allows organizations to gain more visibility of their decrypted packet traffic on the AWS Cloud. Nubeva merges TLS keys with packet feeds for multiple tools and services both in-cloud and on-premises.

By Lanre Ogunmola, Security Engineer at AWS By Eduardo Suzuki, Sr. Cloud Support Engineer at AWS One common question we hear from customers is, “How do I visualize CloudHSM audits logs and generate meaningful insights?” Read more…

By Johan Kraft, PhD, CEO and Founder at Percepio When developing Internet of Things (IoT) device software, it’s hard to know if all bugs have been found. As in all software development, testing can show Read more…