The global authority on world records, Guinness World Records (GWR), was originally a traditional book publisher. To better serve their audience over the past decade, the GWR website and online presence have become focal points of their brand in the record-breaking community.

Since 2012, Guinness World Records have been diversifying from just producing their iconic annual book into being a creative consultancy and digital media company.

GWR receives a lot of user-generated content, and has been publishing across a wider range of media channels. Each year, GWR handles around 50,000 official submissions to attempt records, nearly 30 percent of which are for brand new record titles. All of these submissions are supported by video footage and other evidence.

To keep up with their community’s needs, Guinness World Records has had to reimagine their IT architecture. In this post, we’ll describe how Ensono helped GWR move all-in on Amazon Web Services (AWS) over a period of 10 months. We’ll also explore how Ensono continues to help them innovate using advanced AWS services.

For delivering this data center-to-AWS migration project within 10 months, Ensono won the Best Cloud Migration Partner Award at the UK Cloud Awards in 2019.

Why Ensono and GWR Chose AWS

Ensono and Guinness World Records have been working together since 2002, with Ensono hosting GWR’s infrastructure in a private cloud on a managed service basis since 2008.

GWR wanted a platform for the long term that could host their existing workloads and adapt to evolving business requirements. Ensono collaborated with AWS to propose a migration of all GWR infrastructure to the AWS Cloud.

The following were key drivers of GWR’s migration to AWS:

The migration to AWS presented the opportunity to substantially re-architect GWR’s IT in order to shed technical debt, modernize workloads, and right-size infrastructure.

The extensive capabilities of AWS services are well suited to refactored workloads, which can bring benefits of reduced OpEx, faster operation, and improved supportability. Refactoring costs money, absorbs time, and despite producing technically elegant solutions may not offer an improvement over the existing solution in meeting underlying business requirements.

There were no complex refactoring exercises undertaken during this migration, however. This reduced the cost and time required, which helped to enable additional future improvements that would add more value for the customer.

For the initial migration to AWS, Guinness World Records and Ensono chose the following focus areas:

The GWR IT estate was 80 percent Windows Server 2008 R2 running Microsoft or third-party applications, as well as some Windows Server 2012 servers. The workloads running on those followed one of three different migration journeys.

To save on licensing costs, migrations from Windows to Linux were undertaken. For example, the Windows Server 2012-based Apache SOLR application was re-platformed onto Amazon Linux on EC2.

For the workloads that needed to continue to run on Windows, they were rehosted on Amazon Elastic Compute Cloud (Amazon EC2) license-included Windows Server 2016 instances; the most recent version available in 2018.

It was decided that it would be more cost effective to pay for extended support of Windows Server 2012. Then, at a later date, they could revisit the upgrade of the applications and Windows Server 2012 instances. The first of those workloads is now scheduled for replacement, so this has proven to be a good decision.

Building in modern ways, all of the infrastructure created made use of infrastructure as code (IaC), delivering auditable and reliable infrastructure changes. Config as code (Ansible) was used on the EC2 instances to define the changes to the systems, speeding up deployment through re-use and increasing consistency.

Active-passive solutions are now an anti-pattern still present in the private cloud era. Previously, GWR had a hot DR strategy, which left around 40 percent of Guinness World Records’ infrastructure sitting idle, waiting to be used if the primary site went down.

Those servers had to be licensed, powered, cooled, and patched, but served no customers. This needed to change to a system that met GWR’s restore time and restore point objectives, whilst maximizing use of provisioned infrastructure. 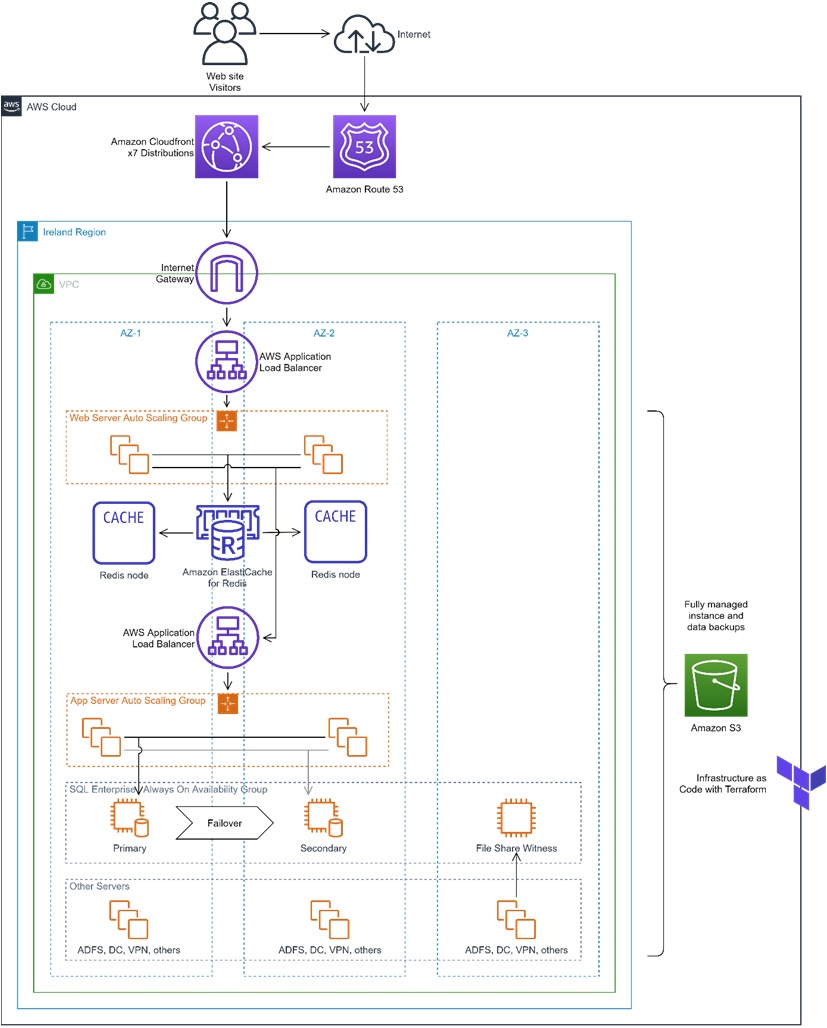 Guinness World Records uses SDL Tridion for their web content management system (CMS), which allows varied configurations ranging from all tiers on one server, to splitting out each tier and server role of the CMS into multiple servers.

The architecture in Figure 2 shows GWR’s previous CMS deployment setup. It only splits out the roles according to tier, concentrating multiple roles onto a handful of servers. This was convenient for reducing Windows license costs. However, it made scaling and maintenance tasks more complex.

The migration of this workload presented the opportunity to re-architect the deployment to meet best practices by splitting out the server roles within each tier onto their own servers.

The architecture in Figure 3 represents the high-level CMS deployment architecture on AWS. It was designed to provide scalability, high reliability, and performance efficiency.

Reference AMI images were created for each unique server role in the workload. Each of these were placed in Auto Scaling groups and subnets that span three Availability Zones, to minimize capacity loss if an Availability Zone were to fail.

Non-critical server roles (Content Manager, Publisher, Deployer) were placed in auto-scale groups with a target size of one, meaning if a server stops responding AWS will replace the instance. If the Availability Zone was not present, it would be re-previsioned into another.

For high availability, the servers hosting these roles have auto scaling policies that maintain a minimum of two active instances for microservices and three for the website. The web site servers scale up in response to load based on the CPU utilization over a number of polling periods. They also scale out on a schedule every weekday afternoon to accommodate the regular increase in load experienced at this time.

Load Balancers were used extensively to allow systems to be added and removed for automation and to ease administration, de-coupling the architecture.

Migrating to AWS has presented Guinness World Records with opportunities to optimize existing workloads, develop innovative solutions, and introduce new business capabilities that would have been considerably more complex to deploy to their previous data center.

GWR developed in-house an Alexa Skill to provide users with one interesting world record per day, plus the ability to provide more if requested. The team is currently developing the next release, which will give access to 50,000 world records on demand. The medium-term roadmap includes delivering video and audio artefacts for those records to suitably capable Alexa devices.

To scale, GWR has identified the need to have a live broadcast capability anywhere in the world, without their staff being physically present. Virtual workstations on AWS were identified as a suitable candidate to meet this requirement.

One of the most important requirements for a virtual workstation on AWS (used for video and audio processing) is a rich remote viewing protocol. It should be low latency to provide lag-free interaction, high quality for accurate color and frame rate reproduction, and feature-rich to accommodate multiple screens and end user input devices.

The vMix Software was selected for live video production software. A Teradici AMI from AWS Marketplace was used as a base image, onto which vMix was installed and configured.

The proof of concept (PoC) was completed within two weeks, with a live demo in which there were incoming live video streams from different locations, stock footage, and screen overlays being mixed in real time and broadcast live on YouTube.

Following the successful PoC, several vMix workstations are being deployed to a production environment, enabling a cloud-based live video production and broadcasting capability.

Ensono is an AWS Well-Architected Partner and has periodically conducted Well-Architected Reviews with GWR since 2018. The recommendations have led to measurable improvements such as cost-saving through savings plans and more widespread use of encryption at rest.

The improvements implemented following Ensono’s Well-Architected Review with GWR helped save the company 17 percent on their monthly AWS bill.

Many organizations are cautious about moving to the cloud, or are fighting against gravity by staying on-premises. When done right, cloud adoption can increase your speed to innovate and offer opportunities to transform customer experiences.

In this post, we shared how Ensono helped Guinness World Records to migrate all-in on AWS. Measurable benefits of the migration include:

Learn more about Ensono’s award-winning migration of Windows workloads to AWS, and explore partnering with Ensono to accelerate your cloud migration and realize the full benefits of the AWS Cloud.

Ensono is an AWS Advanced Technology Partner that helps customers looking to transform their traditional environments with AWS.

By Doug Yeum, Head of Global Partner Organization at AWS AWS re:Invent season is upon us! This is a special time for all of us at Amazon Web Services (AWS), our customers, and certainly for Read more…

By Chris Niederman, Director, Strategic Alliances at AWS Cloud is on the business transformation agenda for customers all across the world, as it enables digital transformation regardless of industry. Customers lean on Amazon Web Services Read more…

By Chris Sullivan, Director, Worldwide Strategic Alliances at AWS For more than a decade, customers have run their most strategic workloads on Amazon Web Services (AWS). This is due to AWS’s experience, maturity, reliability, security, Read more…