By Johan Kraft, PhD, CEO and Founder at Percepio

When developing Internet of Things (IoT) device software, it’s hard to know if all bugs have been found. As in all software development, testing can show the presence of bugs but not prove their absence.

It’s not uncommon that bugs elude detection and remain in the deployed device software. This may cause problems for end users related to data integrity, device availability, battery life, and the general user experience.

The average cost of fixing bugs in an embedded device’s first year of service alone can run in the hundreds of thousands of dollars. Percepio DevAlert works with AWS IoT Core to alert developers when an error is first detected, and provides visual trace diagnostics to identify the root cause.

In this post, I will walk you through the DevAlert process and how it works with AWS IoT Core. Percepio is an AWS Partner Network (APN) Advanced Technology Partner specializing in visual trace diagnostics for embedded and IoT device software developers.

The Cost of Bugs in Embedded Devices

Like all software, firmware in IoT devices contains bugs. Sometimes more of them, sometimes fewer; but they’re always there—even in production firmware and deployed devices.

It’s estimated that embedded software developers typically introduce 50-100 bugs per 1,000 lines of code during development, of which about 3-5 bugs are missed during testing. These bugs typically elude detection during testing and remain in the production firmware.

This happens because it’s practically impossible to test every execution scenario and code path in multi-threaded device firmware. Furthermore, the effort needed to find the last remaining bug tends to increase exponentially.

Although you can never know if all bugs have been found, at some point you need to ship your product.

With many thousands or even millions of devices running your firmware, you can run up against the laws of probability. Some of your customers will stumble upon the remaining bugs and suffer from unexpected errors in the device, no matter how deep the bugs were hidden during testing.

You can only hope that customers report those problems as soon as possible. If they provide sufficient information, you can reproduce and fix the bugs.

All too often, however, customers do not report those errors. Instead, they restart the device and hope it doesn’t happen again. When you do get an error report from a customer, you’ll often have to settle for a vague descriptions like “the screen went blank,” leaving you with no idea of where to begin searching for the bug.

The average cost to debug, correct, and deploy was more than $5,000 per patch. That’s a total of several hundred thousand dollars per project in support costs, just in the first year.

More importantly, many of these patches are fixes to bugs that have been negatively affecting customers for a long time. The cost per patch mentioned in the VDC report does not account for damaged customer relations, poor product reviews, and lost sales, which can have an even bigger impact on the business than the direct cost of fixing the bugs.

The introduction of cloud-based IoT platforms such as AWS IoT Core offers embedded developers a new way to deal with missed bugs in production firmware.

AWS IoT Core lets connected devices interact with cloud applications and other devices. It supports billions of devices and trillions of messages, and can process and route those messages to AWS endpoints and to other devices reliably and securely.

With AWS IoT Core, your applications can keep track of and communicate with all your devices, all the time, even when they aren’t connected.

Percepio has developed a cloud service called Percepio DevAlert that immediately informs developers of errors detected in their firmware.

Hosted by AWS IoT Core, Percepio DevAlert collects error reports from devices in deployment or field testing and notifies the developers the first time a new error is reported. The reports include detailed software traces that show what happened in the firmware just before the error occurred.

Once developers correct the error, they can automatically distribute the patch via the cloud as over the air (OTA) updates, which is both faster and more reliable than asking customers to manually download and update the device firmware.

A manual firmware update requires a process that many end users are often unfamiliar with and therefore unlikely to do.

The eyes and ears of Percepio DevAlert is the DevAlert Firmware Agent, a compact software library that device developers embed in their RTOS-based IoT application.

This agent acts somewhat like a flight recorder, responsible for two important firmware monitoring tasks—keeping a trace of recent software events, and providing a way for error-handling code in the application to report any detected errors, whether related to software or hardware.

When the application detects and reports an error, such as a failed assert condition, the report bundles a few pieces of information:

This error report, called an Alert, is then uploaded to the developer’s AWS account through the existing AWS IoT Core connection.

The DevAlert Classification Engine looks at error codes and any other symptoms provided by the Firmware Agent and notifies the developers in case of a new unique issue; i.e., a new combination of symptoms.

Duplicate Alerts will not generate any notification, by default. This approach avoids flooding developers with notifications even if many devices report the same problem.

Developer notifications are provided via the Amazon Simple Notification Service (SNS), typically via email. You can configure the notification rules in the DevAlert console.

The DevAlert Classification Engine keeps statistics on all reported issues and stores them in a searchable database, making it possible to view the number of affected devices and which firmware versions are affected.

How the Percepio Components Work Together

The illustration below shows the flow of information in Percepio’s DevAlert solution and how it works with DevAlert Classification Engine. 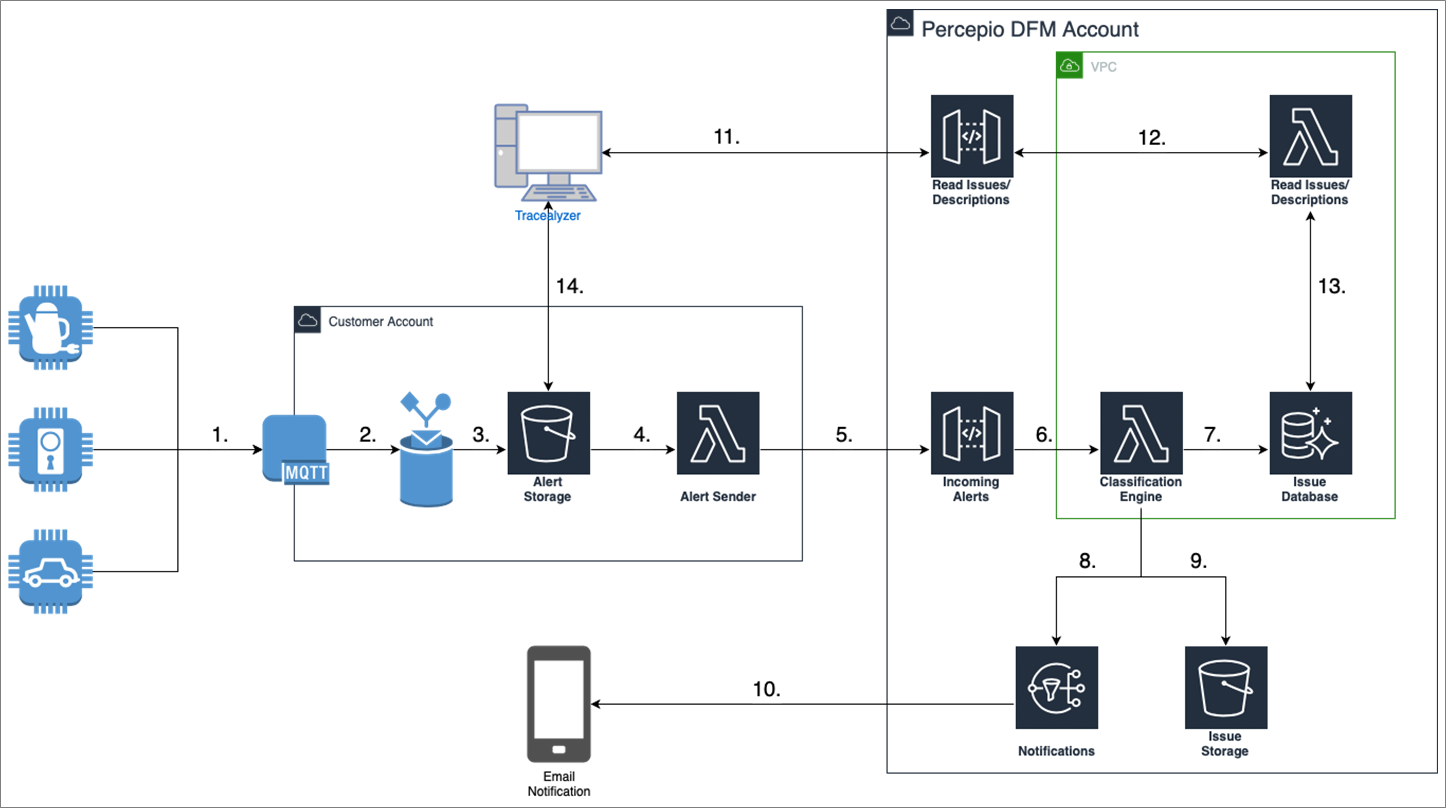 When developers receives a notification from the DevAlert Classification Engine, they can access the corresponding trace in Tracealyzer, Percepio’s desktop software for visual trace diagnostics.

Tracealyzer provides detailed views and overviews explaining what happened in the firmware just before the error occurred.

Tracealyzer is also a stand-alone product you can use during the development phase to leverage debug connections such as Segger J-Link, and STLINK from STMicroelectronics. A physical debug connection allows for using Tracealyzer in streaming mode and record long traces, several minutes or hours, if needed.

DevAlert uses the event recording in “snapshot mode,” meaning the trace data is continuously written to a ring-buffer in device RAM but only uploaded when an Alert is generated.

The encoding of the trace data is very compact in snapshot mode, allowing the DevAlert Firmware Agent to keep a history of between 500-1,000 events using only about 5 KB of RAM.

Tracealyzer can display many different views of the firmware, from high-level architecture overviews generated from the trace data, to detailed timelines and information about task switches, interrupts, and semaphores.

These views are connected so that clicking on a data point or time interval in one of the views highlights the corresponding location in other open views, allowing the developer to study a sequence of events from several angles simultaneously. This allows for explorative, top-down analysis which is essential for system-level debugging. 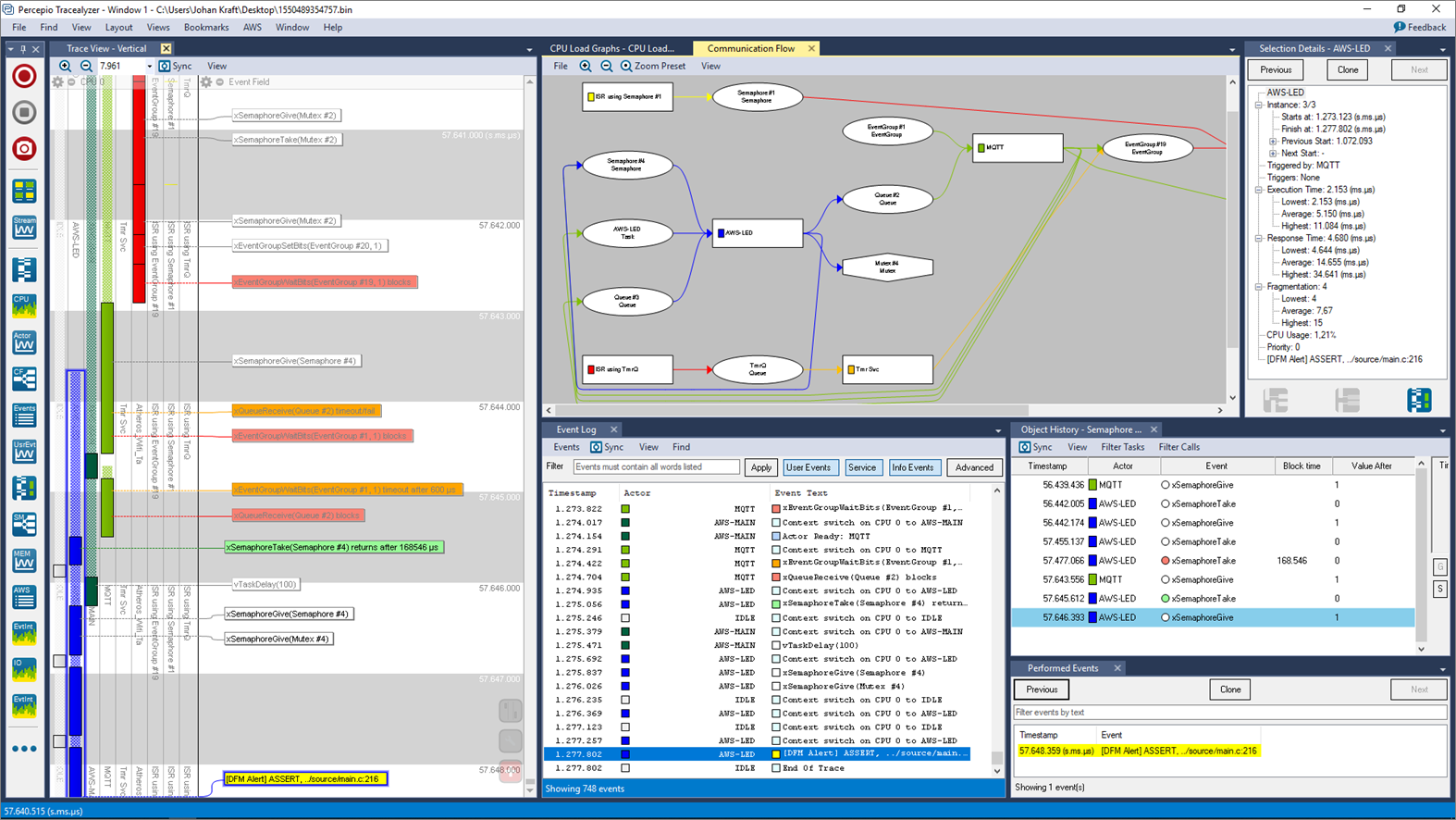 Since traces reported by DevAlert only include the most recent events, the offending code can be located quickly, often near the end of the trace.

If the error is not obvious from this information alone, you will at least know roughly what was going on in the device when the error occurred. This makes it easier to reproduce the issue for more detailed debugging, either by inserting additional Tracealyzer logging or by using a traditional debugger.

Once the bug is found and fixed, developers can use the OTA update capabilities in AWS IoT Core to deploy updated firmware via the cloud as OTA updates. This is both faster and more reliable than asking customers to manually download and update the device firmware.

A manual firmware update requires a process that many end users are often unfamiliar with and therefore unlikely to do.

Percepio DevAlert protects customer data by using AWS best practices for authentication and encryption. It does not expose any additional attack surfaces, as it relies on already available and secure communications protocols, such as MQTT over TLS.

Developers may use the built-in software tracing to log any information of relevance in the firmware. Since this may include sensitive information, the DevAlert Classification Engine has been designed to operate without needing to analyze the trace data. This trace data never leaves the developer’s AWS account.

To do its job, the DevAlert Classification Engine only needs the symptom data that is explicitly reported by the developer’s code via the DevAlert Firmware Agent. This data consists only of  numeric key-value pairs. On its own, without the original source code or DevAlert configuration, it is meaningless.

Developers can use the DevAlert console to define alert types and symptoms with descriptive labels, generate unique numeric codes for them, and download the definitions as a C header file for inclusion in the DevAlert Firmware Agent.

With Percepio DevAlert and AWS IoT Core, device developers can deploy complex IoT firmware with confidence, get an accurate view of the real-world behavior of their production firmware, and provide OTA updates when needed.

Together, these products can reduce support costs for IoT devices, minimize the number of users affected by missed bugs, and improve the overall customer experience.

As we closely monitor the impact of COVID-19 across the world, we have been evaluating how best to support and enable our AWS Partner Network (APN) Partners in this unprecedented situation. We have made the Read more…

By Anubhav Sharma, Partner Solutions Architect, AWS SaaS Factory Software-as-a-Service (SaaS) presents developers and architects with a unique set of challenges. One essential decision you’ll have to make is how to partition data for each Read more…

By Adrian SanMiguel, Principal Partner Solutions Architect at AWS  Editor’s note: This is the final post of a popular series for AWS MSP Partners. Read Part 1 >> Part 2 >> Part 3 I have worked with managed service providers for Read more…