Spurred by the global pandemic, we have seen many organizations shift towards cloud computing to ensure the stability and reliability of their IT applications.

During such migrations, organizations typically focus on the validation of business applications and functional workflows, along with non-functional aspects like security and performance testing.

Further studies suggest most of the breaches that have been observed in cloud environments are primarily due to opportunistic attack, with data left open because of failure to properly configure the cloud platform settings, and not by malware.

Infosys, an AWS Premier Consulting Partner with vast experience in cloud migration and testing, has developed an innovative automation solution. It addresses the need for secure configuration reviews, while ensuring agility and reliability through the migration journey.

In this post, we will discuss how Infosys has taken a secure approach on holistic validation of cloud configuration by performing automated infrastructure validation as part of the DevSecOps pipeline.

This has been achieved by incorporating security and compliance rules early in the lifecycle, thus facilitating the establishment of foundational infrastructure for safe, secure, and compliant cloud adoption.

A leading U.S. financial services provider embarked on a journey to develop and mature the foundational capabilities for sustainable cloud adoption.

As a quality guard, the Infosys Quality Assurance team developed an automation solution covering more than 15 AWS services and 150+ compliance rules. This was integrated into and then executed as a “stage” in a DevSecOps pipeline to continuously validate cloud infrastructure being provisioned across the environments.

The key challenges were ensuring a proper integration into a DevSecOps provisioning pipeline, and to ensure agility in the overall lifecycle during the migration.

Key aspects that were taken into consideration included:

An approach that relied on automation at the core and integration into DevOps was applied to develop test automation solution using AWS services.

Key principles that were considered included:

The test automation solution developed and integrated can parse the Terraform output files to retrieve the AWS resource information and automatically trigger the test controls based on the resource type. 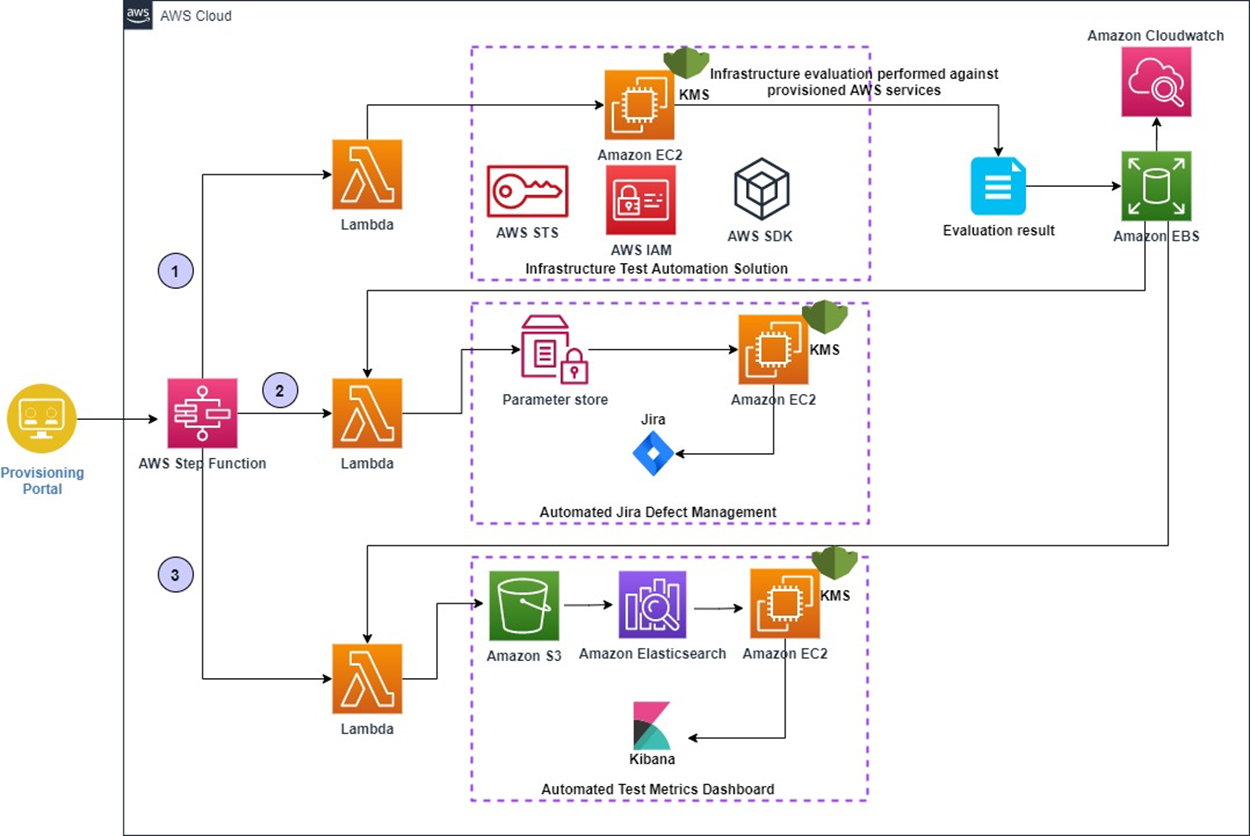 Integration within the DevOps Lifecycle

There are multiple stages involved in cloud deployment, and an effective validation approach calls for clearly-defined boundaries between multiple stages and distinct coverage by the testing stage after infrastructure provisioning.

Linters are integrated into a DevSecOps pipeline before the provisioning stage to scan the infrastructure code and identify any syntactic or semantic errors, deviations from security compliance, or configurations requirements.

In order to avoid the provisioning of incorrect infrastructure, the Linters must stop the DevSecOps pipelines if any issues are uncovered during scan. Once all of the identified issues are fixed and Linter’s scans returns success code, the pipeline should proceed with infrastructure provisioning.

Cloud technology has wide adoption of using IaC for managing and provisioning infrastructure (like Terraform, Python, and AWS CloudFormation). This stage gets invoked upon successful completion of pre-provisioning and hands over the control to next stage if the success code is returned.

Chef InSpec is an open source framework for validating infrastructure by describing security and compliance rules. It works by comparing the actual state of provisioned infrastructure with the desired state. This automation validates a wide range of AWS resources being provisioned during build time for security compliance, standards and configurations checklist.

As the adoption of DevSecOps pipeline increases across the organization for provisioning infrastructure covering every environment, it starts detecting high number of failures, specifically for test environments, and managing these huge number of issues becomes challenging.

In order to address this challenge and bring completeness to the solution, Infosys developed the in-house capability to automatically create defects in Jira for the failures traced during post-provisioning.

This automation is developed in Ruby scripting language using Jira Rest API to create, update, and close the defects with appropriate comments, and then attaches related logs based on test results. The automation is exported in the form of RubyGem that can be used within and outside DevSecOps pipelines.

The test results of the automated provisioning are stored temporarily in the orchestrator workspace (Jenkins, for instance). Once all of the AWS resources are validated, the test results are copied to an S3 bucket (used for persistent storage).

A wide range of test and adoption metrics could be drawn using the infrastructure test results in tools like Kibana and Power BI. Some of the key metrics are:

With the detection of more than 3,400 defects in the lower environments during the course of a migration journey, the test automation solution helped to reduce additional budget overruns on support due to defects and issues spotted later in the cycle and in production.

It also resulted in foundational infrastructure with improved security, higher operational efficiency, and tighter regulatory compliance before applications are migrated to cloud.

Infosys, in its own way, developed an effective and efficient cloud infrastructure test automation solution having key benefits:

Infrastructure is now software in the cloud era; it needs to be treated as code and the need of infrastructure testing is crucial to deliver cloud deployments with expected quality.

At the end, it comes down to whether cloud resources being deployed are configured the way they need to be and are good to consider for baseline. Step left and take an effective and holistic approach to cloud infrastructure validation.

Leverage the foundational capabilities of Infosys to perform continuous validation and provide early and constant feedback about infrastructure quality in a structured and efficient way.

If you’re considering migrating to the AWS Cloud and looking for a testing partner, contact Infosys Infrastructure Testing Services for more information.
.